"Baggage Claim" is so archaic in its depiction of feminine self-worth—and, frankly, so insulting—it's amazing that it's coming out in 2013, not 1963.

It's also the second movie opening this week in which attractive, vibrant people pushing 30 must find spouses within a totally arbitrary and impossibly tight time frame in order to please their demanding parents. While "Baggage Claim" takes place within a black family in Baltimore, "Wedding Palace" is set in the Koreatown section of Los Angeles.

It's a small world after all, sadly.

Paula Patton, however, is a serious globetrotter as a perky and perfectly coifed flight attendant named Montana Moore. Not only does she have the obligatory sassy best friend (Jill Scott) who's armed with innuendoes and in-your-face cleavage, Montana also has the no-nonsense, no-filter gay pal (Adam Brody) who will always set her straight. Both fly the friendly skies alongside her. Their mile-high chatter is mostly mind-numbing, but Brody gets a few funny lines.

Montana also has a childhood buddy named William Wright—please take note of that last name—who lives down the hall from her. Might the man of her dreams have been right under her nose all along? Even the likable and charismatic Derek Luke can't do much with such formulaic nonsense.

But Luke is one of the astonishing array of attractive actors that writer-director David E. Talbert serves up as a smorgasbord of possible suitors. The greatest tension Talbert achieves in clumsily adapting his same-named novel comes from the conundrum of whether Montana should live a life of luxury and excitement alongside a dashing hotel magnate (Djimon Hounsou), or a life of safety and serenity with Luke, who runs his family's construction business.

There's never any doubt. Come on, you've seen a movie before, right?

Before she can get there, though, she and her co-workers manipulate the travel booking system to allow her to stalk various exes by "accidentally" showing up on their flights. You see, her younger sister (Lauren London) has just gotten engaged, which inspires their much-married mother (Jenifer Lewis) to exert even more pressure on Montana to find a man of her own. Naturally, she only has 30 days to accomplish this feat, because that makes sense, and it's a good, round number.

Montana just discovered that the one she thought was The One (Boris Kodjoe, with whom she shares an unintentionally hilarious love scene on a boat) is actually married with a baby on the way. Nevertheless, she throws herself headlong into this wacky endeavor, which entails dashing through airports and flailing her arms, her roller board suitcase skipping on the ground behind her. Aside from her looks and her childhood love of New Edition, Montana's obsessive pursuit of a mate is pretty much the only thing that defines her as a character.

Among other previous boyfriends, she reconnects with a flashy record producer (Tremaine Neverson, better known as Trey Songz) and a dude she rejects apparently because he doesn't know how to use chopsticks. Cue the hackneyed bad-date montage. (There's also the trying-on-clothes montage. Talbert leaves no rom-com cliché unturned.)

The best part of "Baggage Claim," if such a thing is possible, is the section in which Montana quickly rekindles an old romance with Langston (Taye Diggs), a slick opportunist who's running for Congress and needs the perfect trophy wife to stand dutifully—and quietly—by his side. The fact that he's a black Republican sets up an awkward dinner with a deep-pockets donor (Ned Beatty) as well as the film's only truly funny lines. There aren't many, but man, does it feel good to laugh again. 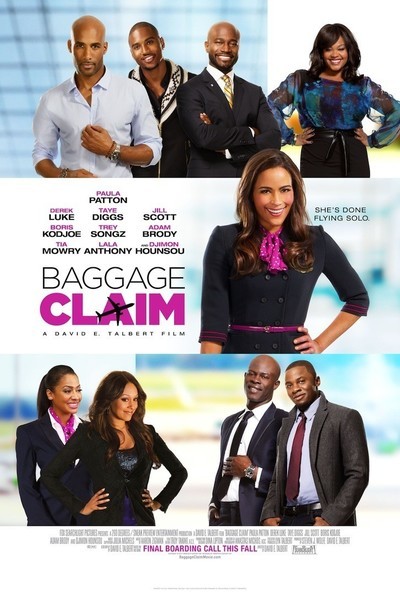