“Bad Turn Worse” joins a long line of movies about people who stayed in dangerous, desperate places just a little too long (it was originally called “We Gotta Get Out of This Place”). Simon and Zeke Hawkins’ confident thriller opens by name-checking Jim Thompson, and proceeds to tell a tale that Thompson himself would have admired in its duplicitous simplicity. With its constant state of twilight lighting, cinematography that somehow conveys what feels like oppressive heat, and characters stuck in criminal quicksand, “Bad Turn Worse” actually earns that Thompson comparison at its best. It’s a confident, engaging film, undone by some narrative sag in the middle but worth seeing for its opening and closing acts.

Bobby (Jeremy Allen White of “Shameless”) and Sue (Mackenzie Davis of “Halt and Catch Fire”) are leaving the podunk town in which they’ve grown up in Middle of Nowhere, Texas. They’re going to college, leaving behind Sue’s lunk of a boyfriend B.J. (Logan Huffman). On one of their last nights together, B.J. decides that the trio should go out in style. He bankrolls the partying by robbing the safe of his moronic boss Giff (Mark Pellegrino), after figuring out that everything, from his pin number to the combination in his office, is based on a variation of his favorite number: 69. B.J. is the kind of testosterone-heavy man-child who doesn’t think before he acts and seriously underestimates the malevolence in the heart of his employer.

Bobby and B.J. come in the next day to work to find Giff repeatedly kicking the Mexican employee that he thinks robbed him. To try and stop the violence, Bobby announces that he took the money, protecting B.J. and, foolishly, thinking he can now make things right. Giff tells Bobby that in order to repay him, he’ll have to do a job, an even bigger robbery of a crime lord named Big Red, who launders money through Giff’s place of business. Of course, this can’t possibly end well.

“Bad Turn Worse” is a story in which the dread comes from well-defined feelings like desperation and jealousy. B.J. lashes out at the two friends leaving him behind in this desolate Texas landscape with nothing but the inevitable path to his asshole employer’s life. B.J. becomes Giff becomes Big Red. It’s the circle of criminal life. Dutch Southern’s script works because we can feel the emotion behind B.J.’s lashing out at the two people leaving him behind. As played by Huffman, B.J. is the kind of kid who figured out a long time ago that Bobby and Sue are smarter than him, and likely headed to lives that will leave him behind. Therefore, his violent stupidity feels organic to the emotion of his character and not merely a plot device as in so many lesser indie thrillers.

Huffman’s performance is balanced by those by White, Davis and Pellegrino. The young star of “Shameless” has a face that Thompson would have loved—all sunken, sleepy eyes that disguise a mind that’s always deciphering what to do next. Davis is a future star, so charismatic on the AMC hit and well-cast here as the girl who outgrew her small town upbringing through literature and intellectual exploration. She needed to get outta this place a long time ago. And Pellegrino is fantastic here, truly disturbing in his gleeful propensity for violence.

“Bad Turn Worse” starts off with such energy—I wanted more dialogue-driven scenes like the opening diner bit about Thompson and whether or not it should be called “Bacon & Egg” instead of the plural if you only have one egg—that it’s bound to sag a bit when the robbery plotting kicks in. It often feels like the trio is too often discussing the intricacies of the plot when more character development would have helped. The Hawkins regain the film’s energy in a disturbing scene that reveals the depth of Giff’s insanity and in the final scenes of inevitable double and triple crosses. Just as in Thompson’s best work, “Bad Turn Worse” takes its characters and their fates seriously. And its accomplishment is that so do we. 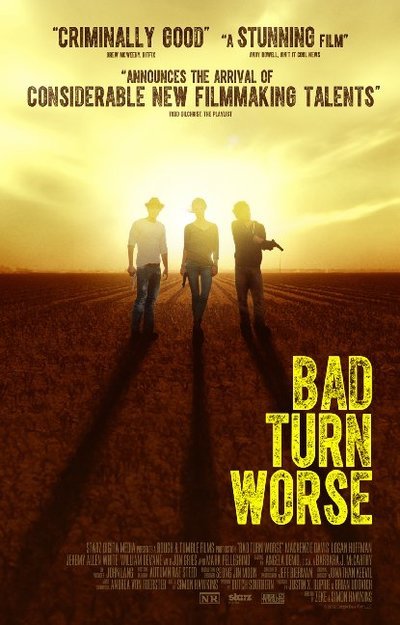