"Bad Cupid," a Valentine's Day release, gives us a Cupid named Archie, played by John Rhys-Davies, who dresses all in black except for red high-tops. He is fed up with human stupidity when it comes to love. He drinks, he uses bad language, and he still uses arrows—real crossbow arrows that create serious, call-an-ambulance wounds. He also uses a baseball bat and a gun.

It is a tough challenge to build an entire movie around the idea that Cupid is an old guy who hangs out in bars and insults, threatens, kidnaps, and brutally assaults people. "Bad Cupid" does not even come close. The characters are unappealing, the direction is indifferent, the actors sound like they had just been handed their lines, and the jokes are not funny. Maybe the awkward pauses in the dialogue reflect the hope they will be filled with audience laughter. Unlikely.

Archie interrupts a romantic proposal by a lake to knock the ring into the water and tell the woman who was about to accept that she can do better. Meanwhile Dave (Shane Nepveu) and Denise (Christine Turturro) are leaving an Italian restaurant and disagreeing about the quality of the pasta when she abruptly breaks up with him in front of the homeless guy eating their leftovers. Dave is devastated.

And that's just about all we ever learn about Dave, who seemingly has no other purpose or activity or interest beyond obsessing about getting back together with Denise. (Is it a coincidence that Denise is also the name of the ex-girlfriend Adam Sandler obsessed about in "Saturday Night Live" skits?)

This is what I call Smurf scripting, where every character has just one defining characteristic. Denise's sole characteristic, if it can even be called that, seems to be dumping Dave because she wants a romantic gesture like in the movies, "like Sarah Conner and the Terminator." So, we get a conversation in a movie about how romance is not like it is in the movies, as though no one ever thought of that before.

Dave's cousin Morris (Briana Marin) is his only friend. Her defining characteristic is that she is a bossy loudmouth who can't commit ("Pretty much midway through the third orgasm, I'm already calling an Uber.")

Then there's Dessert Smurf, I mean Stella (Amelia Sorensen), who likes chocolate cake and has sex with someone she just met standing in line, and Henry (Claybourne Elder) who is in the movie only to be assaulted and kidnapped. He is also there to order ham and cheese on a Kaiser roll when the already sluggish storyline bogs down even further so that the characters can put in their deli orders between a kidnapping and a wedding. The deli order has more depth than just about any other exchange in the film, at least until it veers into a discussion of Manhattan vs. New England clam chowder as a metaphor for love or life or something along those lines. It is pointless, whether you prefer cream base or tomato base for your soup.

The characters randomly move from one dull location to another, with a brief trip to Las Vegas and an extended scene in a dingy bar's dingy men's room. I briefly wondered about whether I should consider the significance of a neon TURNT sign on the wall behind the sinks, especially after it flickered off as they were (finally) leaving for another random stop, the one with the deli order. But significance is not what this film is going for.

Whatever it is going for, it does not get there. Poorly written, directed, performed, and edited, "Bad Cupid" is a Bad Movie. 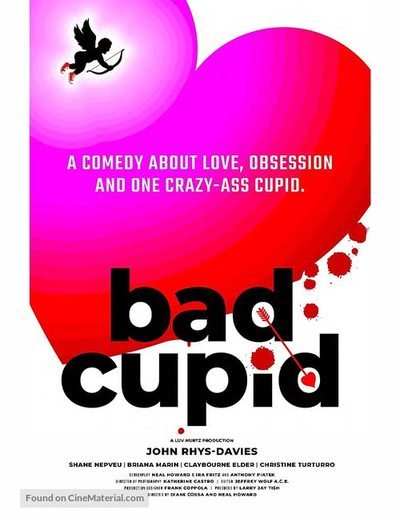