“Bad Boys" tries with all the energy at its command to redeem an exhausted story with sheer technique. This movie is so good-looking it deserves a decent screenplay, instead of one more lope down memory lane. The movie gives us a Miami filled with midnight glitz, shot with the flair of a fashion photographer - backlit monochrome tilt shots and all. It has relentless editing, slick action sequences, and blows up stuff real good.

But what is it about? Two cops. Buddies. Partners. Narcs.

Whose evidence from a $100 million heroin bust is stolen. Who get in trouble with the chief, who yells at them. And with a chick from Internal Affairs, who takes them off the case. And who pick up a sexy, wisecracking sidekick along the way. Oh, and one of the cops is a sexy bachelor and the other one is a family man. The plot is like a jigsaw puzzle with pieces supplied by "48 HRS," "Internal Affairs," "Beverly Hills Cop" and "Lethal Weapon." The movie is a production of Don Simpson and Jerry Bruckheimer, who actually made several of the movies they've ripped off, including "Beverly Hills Cop" parts one and two, so maybe they're recycling. Or maybe they thought the chemistry of their actors would make everything seem fresh.

The movie stars Martin Lawrence and Will Smith, both comic actors, both talented, both allowed to talk way too much in the course of this film. The dialogue runs on endlessly; consider, for example, the basic scene where the commanding officer reads out the two cops. He goes on, and on, and on, screaming at them. Later he screams some more.

There are also a lot of curious interludes in which Lawrence and Smith do verbal riffs, interrupting each other, stream of consciousness, finishing each other's sentences or not bothering to complete thoughts at all, to show a kind of easy familiarity, I guess. We are glad they know each other so well. We wish we knew them well enough to figure out what they think they're saying.

The plot: A criminal mastermind (Tcheky Karyo) engineers the theft of $100 million in heroin from the evidence locker at police headquarters. Lawrence and Smith are assigned to the case.

Smith asks Theresa (Theresa Randle), a hooker he knows, to keep an eye open for high rollers. Sure enough, she gets a call from a guy who's sky-high on drugs and wants to spend $2,000. She asks her friend Julie (Tea Leoni) to tag along. Julie isn't a hooker but, what the heck, the guy's so out of it they'll be back on the street with the dough in 15 minutes.

Theresa gets murdered, in an ugly, unpleasant scene. Julie witnesses it all, and contacts the cops. There is an ungainly subplot in which Lawrence, the family man, has to pretend to be Smith, the bachelor, and live for a few days with Julie, while meanwhile his wife gets suspicious, etc. This stuff isn't even recycled from old action movies; it's out of those Idiot Plots where people don't catch on to anything.

For example, why is Lawrence's apartment filled with photographs of Smith? Is Lawrence gay? Is Smith his boyfriend? He comes up with a sitcom-style excuse, to conceal the fact that they are actually in Smith's apartment. Unasked and unanswered is why Smith would have his apartment filled only with photos of himself. The answer, of course, is that the photos are there to support the vacuum-brained dialogue.

There are a lot of photos in this movie, if you get my drift.

The climax is ideal for those with attention-span deficit.

That way they won't know they've seen similar climaxes hundreds of times before. This one is shot well, with good special effects, but takes all the usual shortcuts, including the Fallacy of the Talking Killer.

Imagine. Bodies are stacking up like cordwood. Propane tanks are exploding. A bad guy appears in the doorway of a plane. He's aiming his automatic weapon at one of the heroes. All he has to do is pull the trigger. And then, what? He talks? Nope, the good guy talks, finding time to say, "You forgot your boarding pass," before pulling the trigger. By then, of course, he should have been dead, but the filmmakers violate credibility to give us a smart remark that is not believable, funny or original. Whom do they make these movies for? What exercise in self-deception inspires them to go to such effort and expense for what is obviously going to be a lame exercise in retreadmanship? 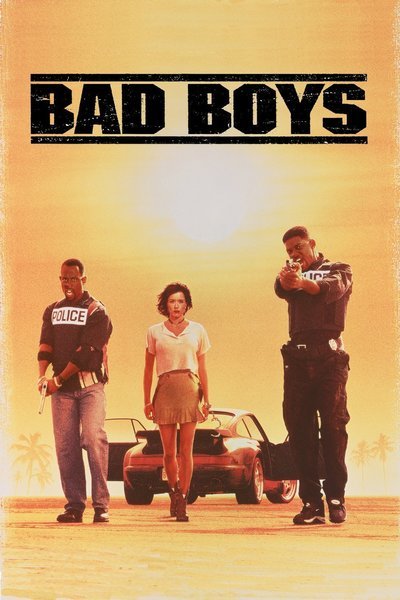 Will Smith as Mike Lowrey