It seems like movies about class and inequality are experiencing a moment. From “Knives Out” at home and “Parasite” abroad, these films force us to look at those who have it all and those who have everything to lose in stark contrasts. In “Knives Out,” its a question of privilege and nativist indifference to workers and immigrants. For “Parasite,” the tales of two families—one rich and one poor—become intertwined in a thrillingly suspenseful story. Juliano Dornelles and Kleber Mendonça Filho’s latest film “Bacurau” fits right in with the trend and takes its social self-examination a step further, indicting the lasting harm of colonialism, corrupt politicians, and American imperialism in a fight-to-the-death bloodbath.

In the near future in a remote corner of Brazil lies the town of Bacurau, an arid but tree-lined place that Teresa (Bárbara Colen) calls home. She returns for her grandmother’s funeral but is disturbed by strange occurrences also unnerving her neighbors. Water has been stopped to the city for months, but the trucker who brings their supplies has his rig shot at. Suddenly, the town disappears off of maps and GPS. Cell phone service disappears. An odd couple of strangers bike through town. One villager spots a UFO. Are they under attack?

The answer is a bit of a spoiler, and I urge anyone who wants to go into “Bacurau” to enjoy its twists and turns to stop reading here. Otherwise, venture on.

Written and directed by Dornelles and Mendonça Filho, “Bacurau” brilliantly balances politics and story. It almost lulls the viewer into the sense that the movie will be about the town’s collection of eccentric characters, like a deep-voiced DJ who acts as the town crier from his mobile set of speakers and the stern-faced Domingas (Sônia Braga), who makes her first impression in the movie as a doctor in a drunken rage hurling insults at Teresa’s recently departed grandmother. There’s also Pacote (Thomas Aquino), an old flame of Teresa’s, her teacher father and the adorable children in his classroom. Later, we meet the mulleted fugitive fighter Lunga (Silvero Pereira), who will order the townsfolk into shape. There’s even a corrupt politician, Tony Junior (Thardelly Lima), who neglects to care for the town or its people.

The politician’s ineptitude and callousness is just a warm-up act for the real villains, a pack of blood-thirsty westerners led by a steely-eyed man named Michael (Udo Kier) who have picked on the poor town as their own shooting range. "Bacurau" does an incredible job of dissecting their open contempt for human life and racism without sacrificing an inch of the narrative. They are the allegorical stand-in for the ruthless businesses that have come to bleed Brazil dry and let its people starve. They are white invaders who do not consider the light-skinned Brazilians who try to ingratiate themselves into their cohort as their equals. The armed hunting party considers the mixed-race town of Bacurau as little more than a target. It’s a chilling metaphor that works on many levels.

As shot by cinematographer Pedro Sotero, “Bacurau” is a colorful variation on “Seven Samurai,” but there are no experienced warriors coming to the rescue here. Instead, the villagers must fight for their lives against encroaching forces and selfish politicians who will sell them out. Rita Azevedo’s outfits in “Bacurau” range from the white coats or dresses of matriarchal characters, the townsfolk’s mishmash of multicolored tank tops and shirts, the camo gear of the hobby hunters playing dress-up and Lunga’s “Mad Max”-meets-clubwear look. Editor Eduardo Serrano’s compositions are both transfixing and unnerving, as quick edits of villagers taking drugs intersperse through both tense and slow moments in the film. Mateus Alves and Tomaz Alves Souza mix an eclectic collection of electronic and Brazilian sounds and music to enhance the movie’s sense of place and futurism.

“Bacurau” never wastes a chance to leave a mark on its audience. Whether the camera is taking in the beautiful steppes of the area or witnessing a battle of the wills between Braga and Kier, the viewer is always meant to be entertained and thinking. The movie is potent with rage from end-to-end. It's mad from loss, mad at the failed government official (a pointed message considering the current heated state of Brazil’s conservative leadership), mad at the brutality that is brought to their doorstep by well-healed outsiders. Yet, there is strength and power in numbers, and there is a reverberating message throughout the film of community and solidarity in the face of so much oppression. It’s a message that needs no translation, and one we may catch in more movies protesting inequality. 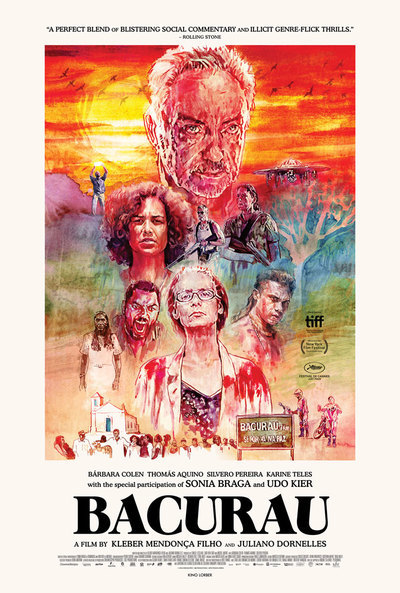