Set in Argentina in 1980, "Azor" is a quiet, unhurried, un-flashy film, and that's what makes it unnerving. You come away from it feeling that you've been given a greater understanding of how authoritarian power-grabs happen. The takeaway feeling isn't, "Oh, the humanity," but, "What would I do if I were in that world? Would I be the revolutionary hero of my fantasies, or something else?"

Written and directed by first-time feature filmmaker Andreas Fontana, "Azor" takes its time introducing and exploring its setting. We're at the midpoint of a military purge of civilian government between 1976 and 1983 that killed, tortured or disappeared thousands and stole land and property from their families. A private banker from Switzerland named Yvan de Wiel (Fabrizio Rongione) has come to Argentina with his wife Ines (Stéphanie Cléau) to find out what happened to his partner Keys, a mesmerizing absent presence; like Harry Lime in "The Third Man" and Kurtz in assorted versions of "Heart of Darkness" (a tale Fontana directly references when the hero takes a boat upriver through a jungle), Keys is a complicated man, variously described as brilliant, distracted, depraved, untrustworthy, and charming. What's undeniable is that Keys left important business unfinished when he vanished, and it's Yvan's job to wrap it up.

From the opening scenes of "Azor" we feel a gnawing dread. Yvan and Ines are brought from the airport to their hotel in the city by a driver who gets stopped by police checking IDs and asking questions. Two young men are being held at gunpoint on the street. We never hear the voices of these men or the officers detaining them, but we're anxious that they'll be put against a wall and shot. When the couple arrives at the hotel, an otherwise mundane conversation between Yvan and the desk manager takes an ominous turn after Yvan describes what they saw coming over. Although it's probably against the manager's code to express political opinions on the job, he makes an exception because he's offended by the implication that something is rotten in Argentina. "You don't understand," he says. "The situation was awful here. The country needs major reforms."

The ellipses and frustrations that the couple encounters in their journey are the film's gateway into helping us feel, rather than intellectually understand, what happens when a military junta seizes control of a country and starts a campaign of destabilization and terror. Scheduled meetings don't happen. You can't find out why they didn't happen or where the absent person is. There are in-person and phone conversations about buying and selling things, but we aren't clear on how the items were obtained and whether they really belong to the sellers. We hear secondhand reports of an important man whose home was visited by the police, who "took everything" from his house. There's a driver in one client's employ that we are told is not good at driving, but is kept around because he's willing to do "other favours" for the boss.

A lawyer named Dekerman (Juan Pablo Gereto) represents a major client, Aníbal Farrell (Ignacio Vila), who is threatening to withdraw his assets from the Swiss bank. Like the other major characters, Deckerman speaks in genteel language. Then he gets Yvan by himself at the track and tells him that his boss was attached to Keys "like an addict sucking his dealer's cock." The language is shocking because nobody else in the film has talked that way yet. The rest of the scene proceeds with no comment on that line, but we see how it destabilizes Yvan.

Rongione is outstanding throughout, but never better than when he's showing us how Yvan's "professionalism" amounts to a conscious suppression of any type of moral read on what’s happening. His wife begins to seem like a more advanced, or enflamed, version of whatever Yvan is. Cléau matches Rongione by out-underplaying him, which could not have been easy to do, so controlled is Rongione's affable, "I'm just an average guy trying to do a good job" take on the character. Inés looks beautiful in her array of designer dresses and swimsuits, and seems to live to swim in fancy pools and sip cocktails in luxury hotel lobbies and smoke cigarettes and make chit-chat, immersing herself in the privileges that Yvan's business has given her, guiding him back toward the established processes whenever he shows so much as a glimmer of regret for anything bad that he might be enabling.

There's a touch of Graham Greene ("The Quiet American") to the film's portrayal of corruption manifested in a nation's upper classes. The well-off people that Yvan mingles with all wonder how they can escape the fates of the disappeared, executed, and persecuted. Their motivations blend self-interest, greed, and a reluctance to stand for any principle that might bring harm, or even inconvenience, upon them. Some seem appalled at themselves for being such small, sad creatures. Others are more matter-of-fact, and talk of how important it is to accept change. A priest who entrusts his investments to Yvan's bank calls what's happening to Argentina "a purification phase," as if something in the water needs to be filtered out.

There's a family in this film, headed by one of the hero's clients, that has been missing an adult daughter for several years—a political agitator who dared to protest the junta. The movie expresses the family's' grief and terror by stepping around it. She's just not there anymore.

I'm not sure what I expected from "Azor," but I didn't expect what it gave me, and that should be considered high praise. As in 1970s paranoid films about powerful people exercising their will through intimidation (I kept thinking of "The Conversation," because of all the words and phrases that remain eerily unexplained) the movie is set in a world that is disordered and violent but presents itself as normal. In its measured, rigorously classical way, the movie gets at a dark truth about what happens to the citizens of a country where one side has been disempowering, intimidating, obstructing, and denuding the other over a period of many years, and the other side can't be bothered to mount an effective resistance because they're mainly concerned with protecting whatever they've still got, and hoping that whatever bad things happened to the ruler's targets don't happen to them, too.

"Azor" was inspired by a letter the director found among the possessions of his father, a Swiss private banker just like the movie's protagonist. It documented a trip to Argentina during the period in which the film is set. There was no indication of the horrors befalling the country at that moment. It was just a letter home about a business trip. Things were done, money was made. This is how dictatorships assert control over a population: an inch at a time, with the tacit approval of the conscienceless, the self-protecting, and the professionals who earn commissions from them. 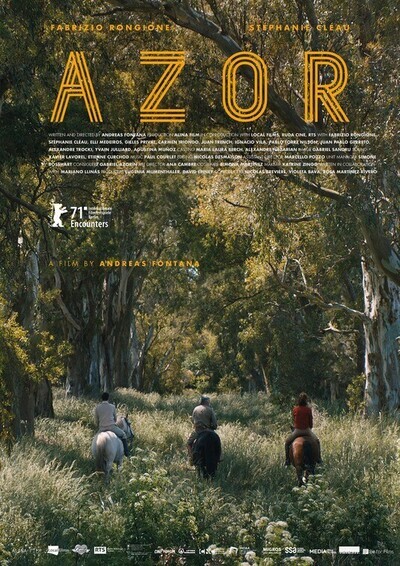