Stanley Nelson’s documentary “Attica” is a harrowing, infuriating look at racism and the abuse of power by people who see others as inhuman. Its subject is the riot that began at Attica Correctional Facility on September 9, 1971. Over 30 prison staff members were taken hostage in the largest prison uprising in American history. Once they temporarily gained the upper hand, the prisoners at Attica—mostly Black and Latino but also White—tried to negotiate for better conditions. They brought in a slew of outside personalities including senators, lawyers, journalists, and even Russell Oswald, the NY Commissioner of Corrections. Instead of reaching a peaceful conclusion, however, the standoff ended five days later in a hail of bullets that took out hostages and inmates alike.

To say Nelson’s film is timely would completely disavow the notion that very little has changed. Many of the details sound so familiar that they feel current. Open the paper here in New York City and you’ll read story after story about Rikers Island and how poorly it is run. Prison reform is a constant topic nowadays, as is the issue of suburban police officers who have nothing in common with the urban beats or the people they patrol. In the case of Attica, New York, it had been a prison town since the 1930s. All of its employees were local residents and its inmates were quite often brought in from the boroughs of a city 250 miles away. “They might as well have been aliens,” is how one talking head describes this difference. Lawyer Joe Heath is more blunt: “There was this culture clash. All White guards and a population of prisoners that was 70% to 80% Black and brown.”

We hear a lot from the inmates who survived, but this isn’t a one-sided affair. There are also interviews with residents and relatives of corrections officers. Editor Aljernon Tunsil masterfully puts together a massive amount of amazing, rarely seen footage from inside and outside the prison, some of it too brutal to witness. And as he did in the excellent “The Black Panthers: Vanguard of the Revolution,” Nelson shows that those rightfully seeking justice can at times be their own worst enemies. It makes their downfall as complicated as it is tragic. The one thing this film deems incontrovertible is that the men inside Attica, regardless of their sentences, deserved to be treated humanely. “Even though we’re in prison, we’re human beings,” says Arthur Harrison, sharing a sentiment echoed repeatedly by interviewees.

“Something was always going to happen,” says George Che Nieves, one of numerous former prisoners Nelson interviews. “The [prison] population was tired. Tired of lies, promises.” Well before September 9, the facility’s terrifying reputation preceded it. “Attica was known as ‘The Last Place,’ the most strict prison in the state of New York,” explains former inmate Tyrone Larkins. When you went there, you knew you weren’t going to Club Fed. As several interviewees point out, there was a good chance you were incarcerated for doing some very serious, perhaps psychopathic crimes.

One wouldn’t expect creature comforts in maximum security jail, but the promises Che Nieves alluded to were bare necessities like toothpaste, soap, and enough toilet paper, not to mention bedsheets and working toilets. This was a problem for everyone, though Al Victory points out that, as a White prisoner, he was able to pull slightly better treatment and resources from the guards. It’s telling that, when the list of demands are read by L.D. Barkley, the man the inmates elected to be their spokesperson, most of them were deemed reasonable by the negotiating “observer council” brought in from outside. There was general consensus among all the inmates, regardless of race.

That observer council was made up of a group of people sympathetic to prisoners’ causes. It included Senator John Donne, chairman of the Prisoner Committee, Clarence Jones, publisher of the Amsterdam News and William Kuntsler, the lawyer played by Mark Rylance in “The Trial of The Chicago 7.” When the inmates saw John Johnson, a Black reporter I grew up watching on WABC, they invited him in as well. Johnson is one of the major talking heads here. “I thought that this was going to be negotiated to a decent humanitarian end,” he said of the proceedings. Most of the people involved on the inside thought likewise.

But there was a major difference in perception based on where you were. “Attica” builds tension by juxtaposing the negotiation process with the increasingly agitated police and relatives of hostages waiting outside the walls of this enormous facility. If, as we’re told, the guards thought the Black and brown prisoners were sub-human, one can only imagine what they thought of their newfound empowerment. Even if you didn’t know the outcome, the scenes of pacing, armed men would assure you this wasn’t going to end well. Especially after William Quinn, the guard whose overpowering and subsequent brutal beatdown gave the inmates full run of Attica Prison, dies on day four of the standoff. As a result, the inmates lost most of their negotiating power. NY Governor Nelson Rockefeller made the decision to allow law enforcement to take back the prison.

We know now that, on September 13, 1971, 29 inmates and 10 hostages were killed when the police and the National Guard quashed the uprising. All of these people were killed by law enforcement, an ominous end title tells us. Using extremely graphic police surveillance footage, Nelson presents just how horrific these events were. You can hear the announcements droning on about surrendering to police while gunfire cuts down people running to do so. There were racial slurs and torturing of surviving inmates; we are spared no aspect of the vengeful actions of law enforcement, actions that would eventually cost NY state $24 million in settlements to surviving inmates, hostages, and the families of deceased hostages. The footage and aftermath are so disturbing that I could barely watch it. It makes you wonder who the worse criminal is.

Rockefeller, whose presidential aspirations only got him to the vice presidency, is heard on the phone with Richard M. Nixon after “order” is restored. The soon-to-be-disgraced president asks if all the dead inmates were Black and implies that it’s great if they are. Thankfully, Nixon doesn’t get the final words in “Attica.” Those go to two people: Dee Quinn, daughter of the deceased guard, who says of the settlement “what does money do when you don’t have your Dad? It was the state’s way of saying we’re gonna give you this money and we want you to go away.” And to Clarence Jones, who says “it didn’t have to happen this way. I will never, ever, ever, ever, ever forget Attica.” After watching this documentary, neither will you.

Now playing in New York and Los Angeles, and premiering on Showtime on November 6. 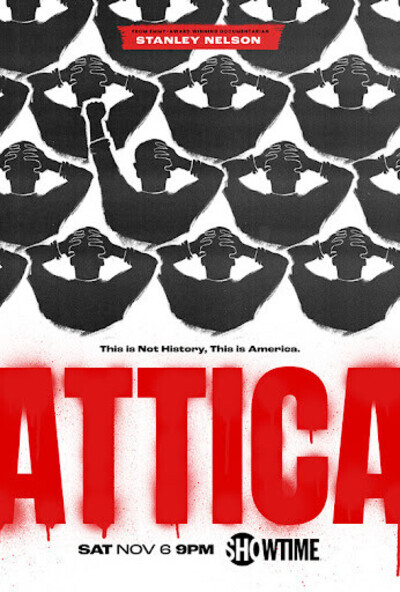