Though still too little known outside Iran, Niki Karimi is one of Iranian cinema’s most formidable and multi-faceted artists. Beginning her career as an actress in 1990, she became one of Iran’s leading movie stars, working with many of the nation’s leading directors (including Dariush Mehrjui, whose “Sara” and “Pari” contain two of her most acclaimed performances). In 2001, she became a director with “To Have or Not to Have,” a documentary about infertility. While maintaining a busy schedule as an actress, she has since directed five more feature films, a notable feat in Iran’s male-dominated film industry. Additionally, she has gained recognition as a gifted photographer and translator (her English-to-Farsi efforts include Marlon Brando’s autobiography and works by Hanif Kureishi).

“Atabai,” the latest of her dramatic features and first to attain significant international distribution (others had prominent places at numerous festivals), shows both Karimi’s skills and ambitiousness as a director. While containing a range of striking performances and some of the most gorgeous imagery of any recent Iranian film, it also powerfully explores a uniquely challenging dramatic topic: male subjectivity.

Kazem (Hadi Hejazifar), the film’s protagonist, is a pillar of his community but one who seems constantly on the verge of imploding. When we first see him, he’s returning to his town in northwestern Iran from a trip of unspecified length to Thailand. Why was he away? The film supplies no answers but the more we see of Kazem’s life and relationships, the more we can sense travel as one of several psychic safety valves he regularly needs.

An architect and developer who constructs vacation homes for city dwellers in the picturesque land where he grew up, Kazem is haunted by his thwarted relationships with two women. One, his sister, committed suicide years before after being married to a rich landowner many years her senior; though Kazem has long assumed that the girl’s unhappy marriage was the reason she set herself on fire, it’s a belief that will be upended as the story progresses.

The other female who remains an active presence in his memory is a girl he fell in love with during college in Tehran. Though completely enamored of her beauty, he never mustered the courage to build a relationship because of how the other students treated him as a country bumpkin. They ridiculed his looks, his speech, everything about him, Kazem recalls decades after the fact, though the insults left wounds that evidently are still fresh.

On the male side of Kazem’s relationship ledger, Aydin (Danial Noroush), the son Kazem’s sister left behind, is now a spunky, high-spirited teenager who obviously idolizes his uncle but also bears the brunt of his frequent rages. Kazem loves the boy but his efforts to serve as a surrogate father inevitably conjure up the violence visited upon him by his own father (Yousefali Daryadel), now a white-haired opium addict with a ruefully distanced view of his family’s problematic dynamics.

The other significant male in Kazem’s orbit is Yahya (Javad Ezati), a friend from the past who shares one of the film’s most striking scenes with him. Out in the country, the two men set an old tire on fire and roll it down a hill, then get drunk (implicitly, since the act is verboten in Iranian cinema) and delve into hidden issues and emotions from their history, a conversation that unleashes some long-buried secrets.

Brilliantly written and performed, this scene is “uniquely Iranian” said an Iranian critic whom I corresponded with about the film. Showing Iranian men pouring their hearts out to each other has become a specialty of Iran’s cinema, the critic said, in large part because such fiercely intimate encounters between men and women are effectively banned by Iran’s censors. Thus the most resonant exchanges between the sexes are those based mainly on silence and suggestion. So it is here. While Kazem can unveil his deepest feelings to Yahya, he again finds it difficult to articulate his passion to a woman when he meets named Sima (Sahar Dolatshahi), a cancer survivor who’ll leave for Tehran unless he’s able to convince her otherwise.

Based on an idea by Niki Karimi and scripted by her and Hadi Hejazifar, the actor who plays Kazem, “Atabai” has a novelistic richness in the complexity of the characters and relationships it portrays. Chief among its people, of course, is Kazem, a man whose anger results from thwarted love—not just romantic but also familial. Using voice-overs (an unusual device in Iranian cinema) by Kazem, the film slices into its protagonist’s layers of guilt, remorse, desire, and aspiration with an almost surgical precision. The result is an unforgettable portrait of a man whose profound frustrations seem to reflect an entire culture’s.

One unusual aspect of “Atabai” is that the language spoken in it is not Farsi but Turkish, which is the tongue of Iranian Azerbaijan where the story takes place. (In a symbolic sense, it might be said that this locale suggests the merging cinematic influences of Iran’s Abbas Kiarostami, who produced one of Karimi’s films, and Turkey’s Nuri Bilge Ceylan.) The town we see is Khoi, Hejazifar’s hometown and the burial place of Shams, the poet Rumi’s mentor and master. In effect, this area and its natural beauties, including rapidly retreating Lake Urmia, become additional characters in the film, and they are beautifully conveyed in Saman Lotfian’s exquisite cinematography.

The name “Atabai” roughly means “strong, great man,” and it’s applied to Kazem by people in his community and family. The film of course reveals how hollow the term of honor is in the case of this damaged, embittered man. If honors are to be bestowed here, they should be given to Niki Karimi for this sharp and fascinating exploration of male vulnerability. 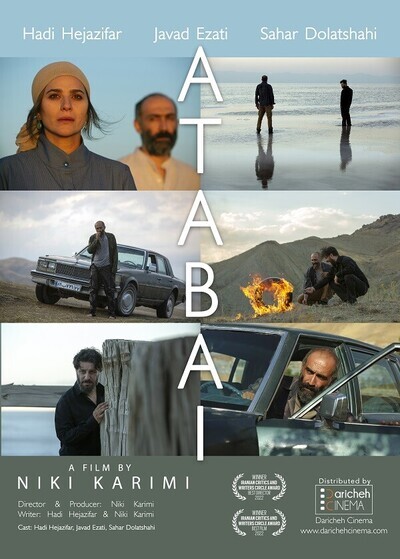