"Assassin's Creed" is a movie based on a game franchise where you jump around in period dress (the setting depends on which game you're playing) climb buildings and murder people. Unlike the actual video game, "Assassin's Creed" isn't ridiculous and fun, but rather ridiculous and turgid. This is the fundamental disconnect that most video games (except maybe "Mortal Kombat," "Super Mario Brothers: The Movie" and "Street Fighter") run into: there's no way to translate the hands-on action of a video game to the silver screen, so many video game adaptations either have no plot, or get bogged down in blase set-up.

Still, why is there so much pensive info-dump talk-talk-talk in "Assassin's Creed" about the modern-day Knights Templar, and their quest to eradicate global violence using an elaborate virtual reality work program—and yet nothing beyond the basic premise makes sense? Who choreographed these dull, repetitive fight scenes? And why are supporting cast members like Jeremy Irons and Charlotte Rampling skulking listlessly in the corner while poor Michael K. Williams eagerly awaits a good line or two? (He never gets one.) If anybody had a spark of inspiration when they made "Assassin's Creed," it certainly doesn't show.

There's a prisoner named Cal Lynch (Michael Fassbender) and he lives in the not-too-distant future. He's sentenced to death and then abducted by a shadowy group (The Templars) that want Cal because of his, uh, DNA. Hang on, let me go back a step: The Templars have a virtual reality machine called the Animus, and it sends people back in time so that they can see the world through their ancestors' eyes. This information is useful to the Templars because apparently they need information to find the location of the Apple of Eden, a device (not a fruit) that can be used to eliminate human free will. Also, Cal's ancestor is a member of a counter-revolutionary group called the Assassin's Creed, a group of killers who opposed the Templars' dogmatic quest to dominate the world by hiding the Apple from th ...

Long story short: Cal's got information that the Templars need and is apparently too dumb to smell a set-up when he sees it. The same is true of Sofia (Marion Cotillard), Cal's handler, and the daughter of Templar leader Rikkin (Jeremy Irons). Cal's got daddy issues, and this drives him to help the Templars for a spell. Also, apparently the machine gives him the magical ability to learn the martial arts skills that his ancestor Aguilar inherited (this is explained better in the video games, but not much better).

So: some guy time-travels, learns kung fu, tries to destroy human free will because he's angsty, and then inevitably rebels against the church people who hire him. I say "some guy" because nothing really feels important in "Assassin's Creed" except everyone's vain attempts at making endless (and fundamentally silly) exposition be taken seriously. So many conversations feel interminable because solemnity takes priority over dynamic storytelling. Characters talk in hushed whispers about the hyper-convoluted methods they use to realize their poorly-hidden agendas.

And the viewer, in the meantime, constantly stays ahead of the characters because nobody is smart or thoughtful enough to be thinking: "Hey, maybe I'm being manipulated by a shadowy organization run by people who want to eradicate free will." Or, "Hmmm, maybe I should help a group of people find something as important-sounding as the Apple of Eden." These characters don't seem real because all they do is dispense narrative information, and move the plot along by inches. Oh, they also occasionally fight, but never in a compelling way. The camera thankfully does not skimp on action in these scenes, but the drab, schematic choreography makes you wish they did.

Still, there is one scene where the filmmakers hint at why they wanted to make "Assassin's Creed" into a movie: Cal is shown a room where non-compliant Animus test subjects are prematurely aged and/or go blind (this is also poorly explained in the movie). Suddenly, the film makes more sense: Is this a "Zardoz" homage? "Zardoz" is a campy, visionary 1974 science-fiction film where Sean Connery plays a rebellious brute who tries to destroy the Tabernacle, a futuristic repository for all of of humanity's culture. The "Zardoz" connection is strong in this scene since it features a menagerie full of "Renegades," non-compliant misfits who simply asked too many questions. For a moment, "Assassin's Creed" looks like it's about to get interesting. That moment does not last, however, since the filmmakers are more concerned with storytelling mechanics than in the story they're telling. Gamers may enjoy "Assassin's Creed," but everyone else's patience will be tested. 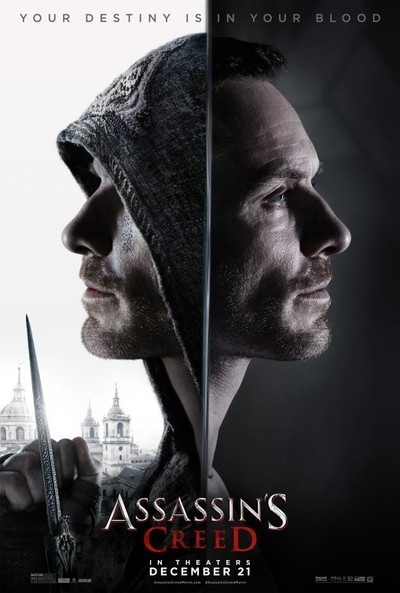