In the early 1940s, Jewish teenager Karola Siegel, experiencing the first surge of puberty, wrote in her diary: "Everything in nature is so fantastically well-organized. One can't possibly think that anything about it is dirty." Born to Orthodox Jews in Germany, Siegel was sent to Switzerland in 1939 (two months after Kristallnacht), in a train filled with children, all of whom were thrust out of Germany by their parents to safety (it was hoped). The children were all placed in a Swiss orphanage to wait out the war. Siegel stopped receiving letters from her parents in 1941. Terrified of what had happened to them (they were both killed), uncertain about her future, she was still a teenage girl, wondering about sex, writing about it in language far ahead of her time. It should be no surprise that Siegel, after a twisty journey through many countries, ended up in America, eventually becoming a licensed sex therapist known the world over as "Dr. Ruth Westheimer." The philosophy of "Dr. Ruth" was there in that diary entry written by a teenage Jewish refugee. Ryan White's wonderful documentary "Ask Dr. Ruth" shows us how Karola became Ruth, how a "Holocaust orphan" (as she calls herself) became a radio and TV star, still trucking at 90 years of age.

If you didn't experience Dr. Ruth's omnipresence in the '80s, the documentary may seem like it emerges from an alternate universe. Westheimer had a radio show and TV show, and she was a beloved guest of late-night talk show hosts (watching her mortify David Letterman by saying "penis" or "vagina" on air was one of her many charms). She was on the covers of magazines. Full-page spreads in the The New York Times were devoted to her. She was controversial, she was hilarious.

When critics inform readers, trying to be helpful, "This story takes place before cell phones" I always think, "The majority of human history occurred before cell phones." It shouldn't be that difficult to put yourself into an era other than your own. Nevertheless, "Ask Dr. Ruth" is a necessary reminder of the ways people got information "before the Internet." Dr. Ruth strolled into a world where you learned about sex from reading Judy Blume's Forever, from sneaking a peek at your friend's parents' copy of The Joy of Sex, or, disturbingly, from the dog-eared copy of Flowers in the Attic surreptitiously passed around your middle-school (as Sofia Coppola portrays in her first film "Lick the Star"). In a society both puritanical and salacious, Dr. Ruth's approach was refreshingly frank.

When asked about her popularity, Westheimer hazarded a guess: "I think it has to do with me not being tall and blonde and gorgeous." Under five feet tall, she is a comfortable grandmother-type, speaking with a brisk German accent, wearing conservative suits. She is totally nonjudgmental. People would call into her show with explicit questions about arousal, masturbation, vibrators, you name it. She would launch into her answer, using words like "insert your penis" and "clitoris" without any hesitation. The audience would laugh, or squirm with embarrassment. She never did. One of her favorite things to say is, "There's no such thing as normal."

White follows Westheimer around for a year (her pace would exhaust someone 50 years younger), accompanying her to personal appearances, family gatherings, a trip to Israel and back. She's an endearing narrator, and a good guide to the extraordinary arc of her life. After Switzerland, she lived on a kibbutz in the brand new state of Israel, eventually training as a sniper in the underground Israeli army. She came to America in 1956, and then moved to France to study at the Sorbonne. Her first marriage broke up, and she moved back to America. A second marriage followed. Then a third. She got a graduate degree. Then another graduate degree, focusing on sex therapy and relationship counseling. The use of animated sequences to represent her early years is jarring (especially since the device isn't established from the jump), as is the use of actresses to read her teenage diary entries in voiceover. Westheimer's own voice is so distinct, with those clipped cadences, the accent, the intermittent giggle, and her storytelling is far more vivid than a literal representation. For the most part, though, White stays in the present, and lets Westheimer do her own talking.

The film does a great job of contextualizing the phenom of Dr. Ruth. It's filled with clips (including one of a guy rushing onstage during a talk she gave at Oklahoma State University, an attempt at citizen's arrest for obscenity). During the early years of the AIDS epidemic, she was a formidable and vocal figure, determined to counteract the often-homophobic misinformation out there about the disease. She was very vocal about abortion rights, although she never discussed politics (she still doesn't). She doesn't call herself a "feminist" ("I'm too square for that," she tells her horrified granddaughter) but her advocacy for women—especially to take ownership of their bodies and sexuality—has been a constant.

Early in "Ask Dr. Ruth," Dr. Ruth appears as a guest on a New York radio show. A woman calls in to say, "I listened to your show in the '80s and I can honestly say you saved my life." She's not the only one. 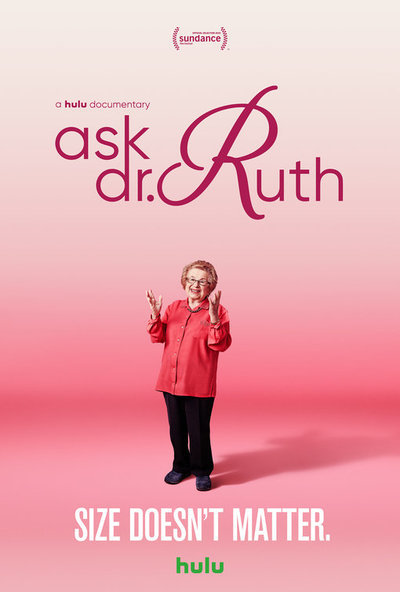 Ruth Westheimer as Herself