Only someone with a heart of stone could fail to love a drunk like Arthur Bach, who spends his wasted days in a poignant search for someone who will love him, will care for him, will inflame his passions, and soothe his pain, and who, most of all, will laugh at his one-liners. Arthur is such a servant of humanity that he even dedicates himself to thinking up new one-liners and holding them in reserve, lest he be unprepared if someone walks into his life and needs a laugh, quick.

Arthur, played by Dudley Moore, is the alcoholic hero of "Arthur," a comedy about a man who is worth $750 million and who would never think of trying to buy anyone's love with his money. Arthur is like the woman in the poem by Yeats, who spent her days in innocent good will, and her nights in argument, till her voice grew shrill. Arthur, God love him, is a drunk. He slips into his bath of a morning, and his butler brings him a martini. After he completes his bath, Arthur sets about the day's business, which consists of staying drunk, and being driven about Manhattan in a limousine in his endless quest for love.

Now the problems with searching for love while you are drunk are many. They include (a) no one will want to love you while you are drunk, (b) you are not at your best while you are drunk, so they won't know what they're missing, (c) you may be too drunk to notice it if someone does finally fall in love with you, and (d) if you survive all of these pitfalls, you will nevertheless wake up hung over, and scientific studies prove that hangovers dissolve love. All of these things having been said, Arthur, against all odds, does find love. He finds it in the person of Linda (Liza Minnelli), a smart cookie who doesn't care about his money but is overwhelmed by the dimensions of his needs. Arthur would like to marry Linda. But his billionaire father insists that he marry a perfectly boring WASP (Jill Eikenberry) whose idea of a good holiday is probably the January white sales.

Arthur turns for help to his loyal butler, Hobson, who is played by John Gielgud with an understated elegance and a naughty tongue. Hobson is dying. But Hobson wishes to see Arthur prevail, for once, against Arthur's father, a sadistic puppet-master. So Hobson subtly manipulates the situation so that the lovers are thrown together at the party announcing Arthur's engagement to the WASP. That inspires a rupture within the family, and a very drunken odyssey by Arthur, who wants to press $100,000 upon Linda, and visits her at home. When Linda turns him down, her father (Barney Martin) becomes a grown man who sheds tears, creating perhaps the funniest moment in the movie.

Dudley Moore became a star, of course, with 10, playing a man who became obsessed with Bo Derek, and who could blame him? In "Arthur," he makes his bid for world-class status as a comic character actor. He brings a wonderful intensity to scenes like the one near the beginning of the film where he has invited a hooker to dinner at the Plaza and then forgotten who she is, and what she is, or why he is with her. It is marvelous to see him try to focus his attention, which he seems to believe is all concentrated in his eyebrow muscles.

Apart from Moore, the treasure of "Arthur" is in its many supporting performances, especially Gielgud's, although everyone in this movie has great moments. You might be tempted to think that "Arthur" would be a bore, because it is about a drunk who is always trying to tell you stories. You would be right if “Arthur” were a party and you were attending it. But "Arthur" is a movie. And so its drunk, unlike real drunks, is more entertaining, more witty, more human, and more poignant than you are. He embodies, in fact, all the wonderful human qualities that drunks fondly, mistakenly believe the booze brings out in them. 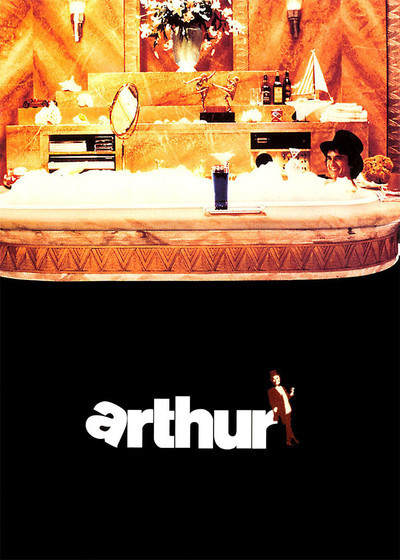