There's a great black comedy to be made about the subprime mortgage crisis that plunged the American economy into the toilet about ten years ago. "Arizona"—a grim horror-comedy about a real estate agent (Rosemarie DeWitt) who gets kidnapped by one of her greedy boss's pissed-off clients (Danny McBride)—is not that film. McBride and co-stars DeWitt, David Alan Grier, and Luke Wilson all bring their A-games to this unpleasantly broad satire, but director Jonathan Watson and screenwriter Luke Del Tredici put so much blame on their hapless protagonists—a bunch of selfish drips who are karmically paying for being selfish enough to dive into situations that, had they been less greedy, they'd realize were too good to be true—that it often feels like an ugly sort of victim-blaming. McBride's villain is also such a cartoonish oaf you half-expect him to wail that he's only violent because he suffers from major "economic anxiety." We get it, we did this to ourselves, thank you for that dazzling insight.

"Arizona" might have worked better as a smart-ass social commentary if its tsk-tsking of consumerist myopia wasn't so consistently on the nose and its plot didn't swiftly devolve into slasher movie cliches. DeWitt plays Cassie, a realtor who rushes into buying a house to get away from her condescending ex-husband Scott (Wilson). Now in major debt, Cassie is routinely harassed by bill collectors who threaten her seconds before they offer to help her. That vicious fiscal cycle is inadvertently broken when fellow mortgage-payer Sonny (McBride) accidentally kills Cassie's smarmy boss (Seth Rogen). Now, a more literal cycle of stalking-and-slaying begins: Sonny kidnaps Cassie and begs her to see him as the nice guy that he imagines he is; she understandably tries to flee; he then hurts more people in a vain attempt to cover up his mounting laundry list of crimes; so she tries to flee even more; and so on.

Along the way, supporting characters—like Grier's trigger-happy cop and Travis Hammer's clueless security guard—constantly underscore their pettiness and incompetence. All of these people have legitimate financial worries, but they're all too obnoxious to be worth caring about: Grier may be the only policeman in the area, but he also doesn't seem to know how to handle either of his guns. And Hammer's character may not have been paid on time, but he uses that as an excuse to not help Cassie when she inevitably begs him to help her. It's unclear what crime Cassie's teenage daughter Kelsey (Elizabeth Gillies) committed, but maybe her bad decision-making skills are a result of her being so self-absorbed that she ... likes to exercise in the privacy of her home? Huh.

Anyway, Sonny is clearly the worst of this bunch. He's shown driving his girlfriend's car, a gas-guzzling Hummer with the words "Bad Bitch" stenciled on the windshield; that image pretty much says everything you need to know about the film's social commentary and sense of humor.

McBride valiantly does the best he can with his desperate antagonist, but he's often better than his tiresome character. He even sells a dumb gag where Sonny, now angry because he can't get on with his day, tries to use a souped-up remote control to turn his television on. His frantic button-mashing only results in his blinds lowering outside his house's floor-to-ceiling windows. McBride nails this scene by sulking quietly while the blinds slowly descend. A less assured comedian might try to add something extra to this scene. But McBride does a lot by sitting still, and letting the shades close behind him, leaving his character to stew in total darkness. McBride deserves the Peter Sellers Award for Most Inspired Comedic Performance in an Undeserving Role, if such a thing existed.

Unfortunately, Sonny's too pathetic to be a good anything, boasting as he does about playing golf despite his doctor's warnings about his bad back (guess what happens next). He unfailingly—and loudly—blames others for his destructive behavior: "Why did she have to do this? She didn't have to do this! She could have been nice." Sonny also literally turns an angry dog loose on Cassie moments before the dog turns on its heel, and attacks Sonny instead. Never mind trying to understand what caused Sonny, or his fellow characters to leap head-first into financial ruination: all we need to know is that they did, and therefore deserve everything that's coming to them. And if you think that's funny, just wait'll you see what's in this mirror. 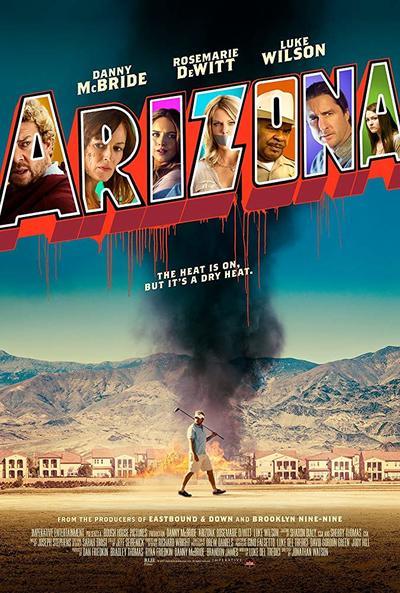