Since it was first popularized in Alan Moore and Dave Gibbons’ Watchmen comic/graphic novel in the mid-'80s, the “superhero on the skids” trope hasn’t had all that many iterations on film. There was 2008’s “Hancock,” starring Will Smith as the titular drunkard/anti-Superman; and of course the character of Wolverine, featured in several pictures, has his ups and downs. In “Archenemy,” the fellow with above-average powers, who guzzles booze in alleyways and punches walls to no avail while complaining “I used … to punch holes … in space,” bemoans his lost powers while insisting on not being called a superhero.

This character introduces himself in an animated introductory sequence in which he describes himself in voice-over, while the images depict how he came to be in his contemporary sorry state. He was a hero in another dimension, powered by “cosmic blood,” but was outwitted and fell into our (slightly futuristic itself) universe, where he’s a decrepit nobody. Dubbed “Max Fist” by street kid and wannabe Internet influencer Hamster (Skylan Brooks), he vexedly tells his new Boswell “Say super one more f**kin’ time.”

Hamster’s older sister Indigo (Zolee Griggs) seems to work for a drug kingpin known only as “The Manager” (Glenn Howerton), and she has a proposition for him. “I wanna make it rain … we should be going viral.” “Viral?” The Manager asks. “Viral,” she responds. Here one begins to long for the charms of old movies—that is, very old movies, movies with no spoken dialogue.

It gets worse when Indigo is tasked with getting some money from one of The Manager’s recalcitrant operatives, named Krieg. He’s played by comedian Paul Scheer, who wears a pair of red Speedos and has a short length of barbed wire  depicted in tattoo form on his forehead. (Above that is writ the word “genius.”) He raps at Indigo with a ferocity that made this viewer think, “Thanks but I’ve already seen ‘Boogie Nights,’ and in fact I’d rather be watching that now. Oh, and I’ve seen ‘Intolerable Cruelty,’ too.”

Rather improbably, and in part due to Joe Manganiello’s very committed performance as Max, the movie does build up its own slightly trippy head of steam as it resolves whether Max’s schtick is true—or if he’s just, as one voice in his head tells him, “a schizophrenic who lives under a bridge.” The animated sequences keep coming back, and they’re useful—the low-budget movie seems to keep its powder dry with respect to effects until certain crucial moments, and the animation livens up the expositional walk-and-talks Fist and Hamster often take. The performances eventually suggest that some of this stuff is meant to be somewhat satirical and maybe even out-and-out comical. (When Hamster sees Fist snorting some white powder to get cranked before a fight, he indignantly shouts “Are you saying the cosmic blood is crystal methamphetamine?”) Writer/director Adam Egypt Mortimer is clearly a movie-mad soul, and if he can get a little further out from under his influences he may concoct something a more consistently geekily transportive.

Now in theaters, on demand, and on digital platforms. 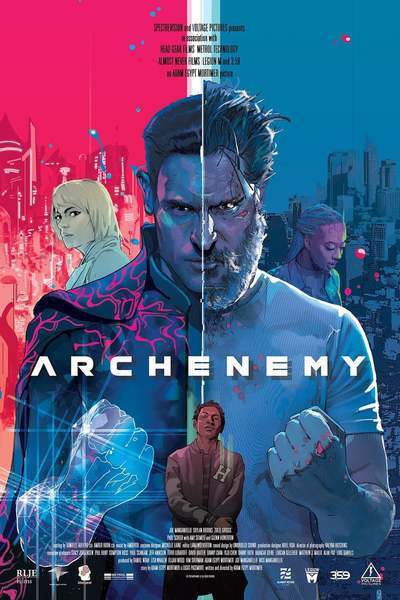 Glenn Howerton as The Manager