Arabian Nights: Volume 2, The Desolate One

“Arabian Nights,” Miguel Gomes’ state of the union epic, continues with "Part 2: The Desolate One." The stories in this chapter have a more melancholy tone, less angry and curious than those in part 1, more bewildered and sad. They take on the character of gently cautionary folk tales like that of Anansi the Spider or Rainbow Crow. Gomes abandons the kind of dreamy abstraction that defined a lot of "The Restless One" in favor of a loping semi-naturalistic irony. There are ghosts, phantoms, apparitions, projections and odd fusions of the past and present. If "The Restless One" was about selfish people learning empathy by force if necessary, "The Desolate One" is about learning to tolerate lesser evils because there are worse ones just around the bend.

The first story is about a man named Simão 'Without Bowels,’ (Chico Chapas) which I’m sure sounds less gross in Portuguese. He killed his wife, daughter and two other women and then hid from the police in a really lovely hill town’s hinterland. Hilariously, everyone knows where he is and politely puts up with him hiding out in their barns and stealing the clothes off their scarecrows. Gomes describes him as a hero to the townsfolk, but we don’t see much of that. The point is that simply by evading authorities he became something of a man of the people, and if that comes at the cost of a murdered family, then so be it. But there’s something more sly going on in this vignette as later connoted by the little episode that follows it, in which the leader of a troop of nature scouts falls to his death during a team-building exercise. The town Simão hides out in tolerates him because they’re far too set in their ways to change just because he’s technically a wanted criminal. Take away a pillar of the community, even one that narrator Scheherazade (Crista Alfaiate) keeps calling “bastard” and “son of a bitch,” and all would become chaos. The internal workings of the towns in Portugal need to remain intact because the government doesn’t care if they survive or not. The police force, with their machine guns and drones, look like they’ve been sent from the future when they descend upon the lush hamlet looking for their quarry. They don’t belong here, and they don’t care what they destroy carrying out their idea of justice.

The second story begins with a handful of the most gorgeous images in the whole of “Arabian Nights." A hand-made diorama of the earth flanked by three moons fades into a purple tile countertop supporting two glasses of wine. Then we see the penis of a man who recently deflowered his new bride (Luísa Cruz). She struts through the house bathed in the violet glow of the three moons to call her mother and let her know the wedding night was an unqualified success. Her mother (Joana de Verona) is the subject of this story, called “The Tears of the Judge.” The bride’s mother is the judge, and she’s across town overseeing a case of property theft. A woman sold her landlord’s furniture to pay off debt accrued by her dimwit son. Perhaps he had it coming, as a witness tells the judge that this man calls emergency services 6 times a day just to watch the ambulances go by his house. When questioned the landlord admits this, but says he’s acting under the orders of a genie, conveniently present in the court. The genie was acting under the orders of the evil man who freed him from the lamp. The judge will look on in astonishment as each new witness indicts some new party in the crime, up and up and up the ladder. The point is pretty obvious and has only one logical conclusion but Gomes directs “The Tears of the Judge” spectacularly, which nicely renders its inevitability moot. The point of a story like this is obvious the minute surprise witnesses start showing up, but Gomes, like Luis Buñuel guest directing an SNL digital short, takes such delight in dreaming up each ludicrous new witness (like a talking cow and a dozen courtesans) that the central gag never runs out of steam.

The final story in “The Desolate One” concerns an adorable dog called Dixie who passes from one owner to the next, each one telling some little story about how the economic crisis, not to mention health-care and a general malaise, has impacted the residents of a dingy apartment building. Gomes has fun with the form of this story, but that’s about all the fun there is to be had as every new human little Dixie encounters is sadder than than the last. We ping pong between the residents of the apartment complexes, getting a humourous, vibrant portrait of an average ad hoc community, between prolonged rounds with their neighbors, the “owners” of the pup. Dixie is a mixed blessing to her owners as a dog reminds one of the passage of time, and the loneliness that makes one seem an ideal caretaker for a cute animal. Dixie is a temporary solution to a longterm problem, and frankly, she has problems of her own.

The melancholy that falls over this chapter is hard to shake but its tempered slightly by the love Gomes has for his characters, bad habits, ingrained sadness and all. By maintaining a daydreaming disquiet even as he fluctuates in tone and milieu, Gomes connects his three chapters through the despair of the people; looking for heroes, powerless before corruption, surrounded by ghosts. They feel like something out of folklore, to be dropped in on while we learn a lesson that should have sunken in hundreds of years ago but always fails to take hold. The sadness that has fallen over these disparate characters is like the grey skies that hover over the Portuguese streets. “The Desolate One” hangs together the best of the three chapters of “Arabian Nights” and feels the most coherent, the most touching, and perhaps the most accurate a representation of what it feels like to live in Portugal during the financial crisis. Gomes invites us in to his smoky, shabby yet hopelessly gorgeous home and waits for the power to go out, the water to run black and the landlord to hammer an eviction notice on the door. If viewers feel at home, that’s because when the greedy and tyrannical seize power, everyone is equal. It’s up to us to acknowledge it. 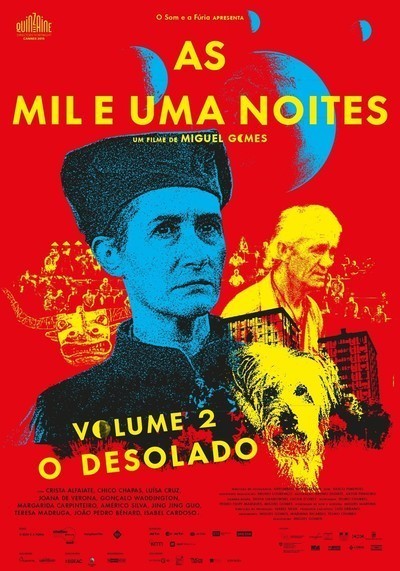