Arabian Nights: Volume 1, The Restless One

If someone asked me about America as I understood it, I’d play them Interpol’s “Turn on the Bright Lights” and tell them this made the world just a tiny bit straighter for me after 9/11, and scored my first relationship. I’d tell them my great grandmother ran away from her impending marriage and joined the circus. I’d relate the story of my heroes Andrew Sarris and Molly Haskell, and how gorgeous I’d always found it that two kindred spirits found each other despite their apparent differences. I’d tell them that our country was where studio filmmaking was perfected, and that I’m sometimes a little worried that its rewards keep people placated while the rich get richer and gun violence runs rampant. Emmett Till, Elaine May, the Rosenbergs, Stanley Kauffmann, Michael Brown, Warren Zevon, Charles Burnett and Eugene McCarthy. The good and the bad. That’s the America I know. Everyone has a different version of the land they live in, and they only know so much, but that little bit contains multitudes. That is the impetus behind Miguel Gomes’ latest film "Arabian Nights" … or, maybe series of films is a more apt description. It’s a six-hour movie with a tonal and thematic through-line split into three two-hour sections. His wish is to tell the world about the Portugal he knows and the many, many pieces that make it whole.

It begs pronouncement, first and foremost, that "Arabian Nights" should be watched all at once. Its parts, though cheerfully beguiling on their own, sing a more coherent song when watched end to end. They conclude powerfully after six hours. That’s not to say you should wait if you don’t want to. They’re delightful experiences, breezily stylish and full of life, but there’s a reason Gomes felt the need to make as much of this film as he did. There’s a lot of Portugal, much of it being driven into poorly kept history books by the current government, and he wanted to pay tribute to all of it.

"Volume 1, The Restless One," as he’s subtitled it, is most overtly about the Portuguese government’s version of trickle-down economics and the way it crushes hope among the working class. We open on a shipyard, the subject of a labor strike. Gomes observes the sad, damp workplace setting unused while on the soundtrack we hear the stories of men who used to animate the big cranes. The giant machines slumber as every worker tells us what it meant to have a job, to keep the country humming. Then slowly the accounts turn dark. Broken bones and chipped teeth from strike breakers start appearing. We see a lonely news crew covering the incident, one gathers, days after the worst of the violence has subsided. That’s why Gomes is here, physically, spiritually and morally. To make sure that this story will be covered in more depth than a single news crew can manage. That’s why "Arabian Nights" is six hours long. That strike is one piece of a jigsaw puzzle that, once completed, depicts misery, violence, avarice and confusion, but also hope, freedom and solidarity.

Gomes and his crew come next, filming themselves in preparation for their undertaking—making the movie we’re watching. The camera finds Gomes sitting alone on a bench surrounded by his crew. After getting a sickly look on his face, he shiftily excuses himself from his seat and runs away from his crew. Impotence, he calls it, in voice-over. Terror at not knowing how to continue with the film. “I’m stupid and abstraction gives me vertigo,” he offers as the reason why he can’t link the strike at the shipyard to something else that interests him, a plague of hornets decimating the local bee population. Then he tells both stories simultaneously and the link presents itself, as if by magic. Not so abstract any longer. Gomes begs that the viewer remember the confidence he instills in this flourish as he weaves the complex tapestry that is his Portugal. He has many vignettes, many tangents, many fables, parables and modernized myths in store, and if you remember how neatly he can tie together bees and striking laborers, you’ll never forget that all of this vertigo-inducing abstraction will become a strong whole.

Gomes informs us that the stories that follow are told by Scheherazade, the fabled princess, who gave herself a stay of execution by telling her murderous husband fairy tales for 1,001 nights. Every night she takes a speed boat to an island of women who tell her new stories to bring back to her husband, the grand vizier, to distract him from killing her. Scheherazade is played by Crista Alfaiate, who smiles as her director describes her beauty, is announced by the sweet sounds of “Perfidia,” and, above all, she is Portugal, the one Gomes and his heroes wish to preserve. She tells three stories in "The Restless One." One is about a group of bankers who wish for unyielding erections and, of course, get more than they bargained for. One is about a rooster who won’t stop yodeling at inconvenient times. It turns out he has a story of his own to tell, about a pre-adolescent love triangle. Finally, we check in with a trade unionist whose stomach rebels against him as he tries to collect the tales of three recently unemployed men. This is the final section of part one and it plays kind of like an episode of "Parks and Recreation" written by Franz Kafka and directed by Aki Kaurismäki. Each of these stories slowly unfurls its metaphoric underpinning and meaning in modern Portuguese politics just in time for the next fable to begin.

Part one of "Arabian Nights" has many wild components and even though they adhere to their own set of aesthetic principals, they make for a strange two-hour movie (which is why it’s best to watch it with parts two and three). And yet this buffet of colorful characters and gently surreal symbols all bear the unmistakable stamp of Gomes, the restless one. His retelling of Portugal’s identity crisis is glued together with his wry sense of humor, cinephilia and knowledge of the seductive allure of all things untouched. He wants us to know that even though his land is corrupted, mercilessly set upon by politicians and ruthless police forces, there is glory left in the land and people, and, occasionally, justice finds them. By treating modern crusaders as part of a cycle of myths, he makes their struggle heroic and worthy of being told again and again like the legends he draws inspiration from. Nebbish union organizers take the place of swashbuckling heroes, even though doubts and pains gnaw at their insides. They’re fighting, in their own way, to maintain the health of a nation. Gomes, the director, is doing all he can to help by chronicling a dozen different melancholy episodes in the fight for a better tomorrow. The Portugal that Gomes wants the world to see is a prisoner, but it has so many stories to tell, it could never remain in bondage. 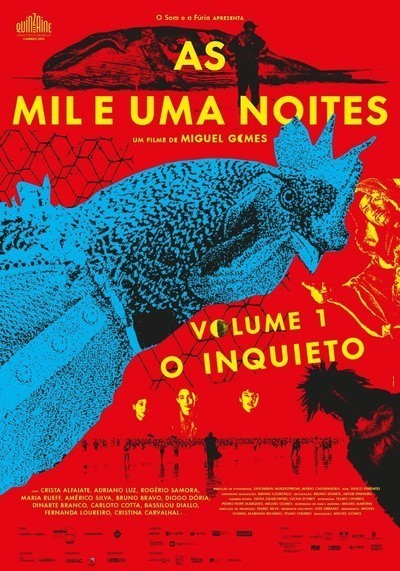 Miguel Gomes as Himself

Cinematographer (excerpt "A História do Galo e do Fogo"