My dad was one of those guys who would always be up for a documentary on World War II—if he stumbled upon one while channel-hopping, he would almost inevitably be in for the long haul. As a result, I wound up seeing a lot of them as well and when observed from a purely cinematic perspective, very few of them made much of an impression. After all, if you have see one combination of stentorian narration, talking head interviews with semi-obscure scholars and miles of increasingly familiar stock footage, you have seen them all. Obviously, this is not a format where bold experimentation is necessarily a good idea—you might wind up with something like “All This And World War II,” the infamous 1976 obscurity that juxtaposed newsreel footage covering the entire war with covers of Beatles songs performed by the likes of Elton John, Helen Reddy and Frankie Laine—but while my dad could look at the same old stuff as a form of comfort food, I would find myself wishing that just one of these documentaries would offer up something different for a change.

Erik Nelson’s “Apocalypse '45,” a fascinating look at the final months of the brutal War in the Pacific, stands apart from most other takes on the subject. None of the familiar elements that I referred to earlier turn up at any point in the proceedings. Instead of employing the usual combination of narrator and interviews to help relate the narrative, Nelson, a frequent collaborator of Werner Herzog, uses narration weaved together from interviews with two dozen men who actually lived through the events depicted here to give focus to the footage. As for the footage, it is comprised of more than 700 reels of archival color footage that has been stored at the National Archive, virtually none of which has been seen by the public before, and has been digitally restored in 4K.

Among the items on display here is a piece of genuine and heretofore unseen bit of film history. Towards the beginning of the film, there is footage shot in the wake of the attack of Pearl Harbor that illustrates the decimation of the Pacific Fleet. These scenes, which capture the wreckage in simple but horrifyingly direct detail, were shot by none other than legendary filmmaker John Ford, who was one of a number of notable American filmmakers employed by the government to help chronicle the war. (This story was recounted in the excellent 2017 documentary “Five Came Back.”)

The rest of the footage may not have the same pedigree as the Ford material but the moments captured here by the cameramen embedded with the troops is often stunning. We see scenes depicting the Battle of Manilla, aerial bombing runs, troops heading in the direction of the island of Iwo Jima not realizing the absolute carnage that awaited them, kamikaze pilots aiming their planes at American targets on suicide missions, footage shot back home of A-bomb tests, and the aftermath of the bombings of Hiroshima and Nagasaki, which hastened the end of the war but at a terrible cost that mankind continues to reckon with to this day. (It should be noted that these sequences have not been sanitized and some of the things they show—scores of dead and badly wounded bodies, a person in Saipan jumping off of a cliff to their death rather than be captured, survivors of the A-bomb blast—will be hard for many viewers to take.) The interviews with the participants are equally fascinating in how they provide a plain and unadorned take about what it was like to live through these events, as well as perspectives that have developed after having lived with these memories for so long.

The one thing that might frustrate some viewers of “Apocalypse '45” is that the people speaking on the soundtrack are not identified until the very end and it is virtually impossible to cite who is specifically speaking at any given moment. I confess that this approach by Nelson was a bit disconcerting at first but after a while, it proves to be an ideal choice that emphasizes how the war effort was a collective experience in which people came together as one in order to defeat a common foe. Although the release of the film is obviously timed to coincide with the 75th anniversary of VJ Day, it carries a message and inspire emotions that will strongly resonate with viewers no matter when they watch it.

And yeah, I suspect my dad would have been fascinated with it as well. 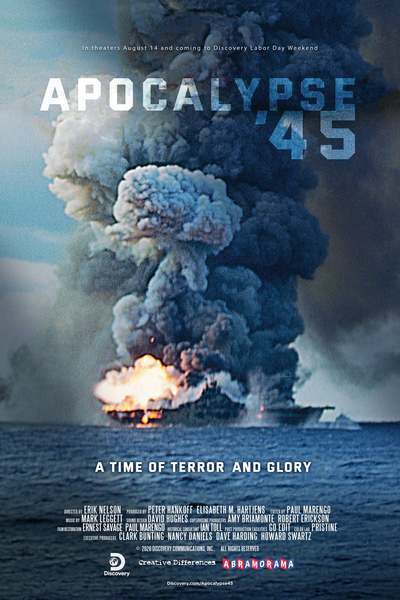