“Anything for Jackson” has the kind of premise that most directors would have turned into a goofy comedy of errors, especially in the years after “Shaun of the Dead” made horror-comedies cool again. And it starts off with some wicked dark humor that leads one to believe it’s going in that direction ... and then it’s not. Justin G. Dyck’s very smart movie lures viewers in with its clever concept and instantly strong characters only to present them with the kind of nightmare fuel that would impress Clive Barker. Dyck has an extensive resume of TV holiday movies with titles like “A Christmas Village,” “Christmas in Paris,” and “48 Christmas Wishes.” Maybe all that forced cheer taught him a thing or two about the dark side.

“You can’t win a moral argument with me … I’ve made a deal with the devil.” So says Henry Walsh (Julian Richings) to his very pregnant patient named Shannon (Konstantina Mantelos), whom the good doctor has kidnapped and cuffed to a bed. And he’s not exaggerating. Henry and his wife Audrey (Sheila McCarthy) lost their daughter and grandson Jackson in a horrible accident, and the grief has driven them off the edge. Unable to imagine life without the charming boy, they turn to the occult to solve their problem. Henry and Audrey join a group of Satanists that meets at a perfectly average Community Center, who help them track down a book not unlike the Necronomicon made so famous by “The Evil Dead,” and, well, unleash something similar to what Ash discovered in that cabin in the woods. After performing a ritual over Shannon’s belly, the Walshs start to have visitors, and not the good kind.

Dyck and writer Keith Cooper waste no time getting to the meat of their story, opening with the kidnapping, and setting the stakes with a few flashbacks—Audrey discovered she could resurrect a crow with the book and seems to be the planner more than her husband, who quickly lets the story fall apart enough to draw the attention of the authorities. The very effective midsection of “Anything for Jackson” is a series of what could be called visitations on Audrey, Henry, and Shannon. It turns out that when you call on Satan for help, he brings some friends, kind of like Pinhead lets his buddies tag along in “Hellraiser.” The demons and ghosts at the center of “Anything for Jackson” become increasingly disturbing, including a woman who is literally flossing her teeth out of her mouth and a bending, twisting creature that I won’t forget for a very long time. And everyone who comes anywhere near the Walsh household gets sucked into the evil vacuum not unlike how the people around Damien in “The Omen” were essentially doomed.

There’s an inevitability to “Anything for Jackson” that forces Cooper into something of a corner—no one who has seen a movie expects this plan to work. And so the climax doesn’t have the power of the midsection, especially as another character gets a bit too heavily involved in the action. However, it holds together largely because of the committed performances of the cast. McCarthy convincingly conveys how overwhelming grief can lead people to make bad choices while Richings is simply fantastic as a man who is really trying to save his remaining loved one from a life of misery more than anything else. These are both great performances (and Mantelos, while forced to scream a bit too much in the first act, develops a strong character as well) and the movie falls apart without them.

Dyck’s direction is confident, especially when considering the limited scope of the film, which largely takes place in the bedroom in which Shannon is being held with pretty much only three characters and whatever else is dropping by that night. He has a clever habit of not heavily foreshadowing his scares—allowing some of his most disturbing imagery to just jolt the audience without feeling like he’s resorting to a jump scare. Years of working in the holiday movie factory has likely made him more efficient than most young horror directors, and that efficiency pays off, even if fans of his other work who see this one may be too disturbed to ever believe in the magic of Christmas again. 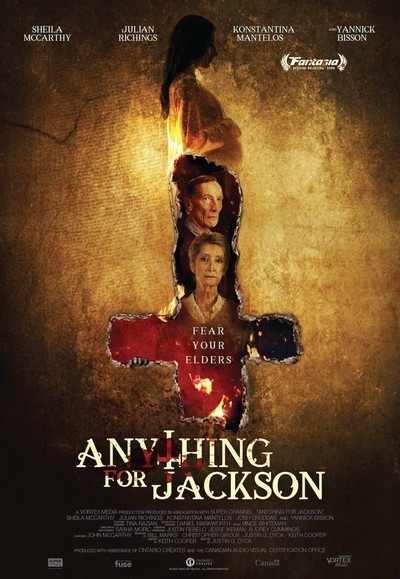