Comedian Joel Hodgson once said: "If you go right for the obvious joke, it doesn't give you any place to go." He added: "Me saying the most blunt, direct thing is like me pulling out a gun and shooting it right away." The makers of the amateurish horror-comedy "Another Wolfcop" clearly have not learned Hodgson's crucial lesson. Which is a shame, since "Another Wolfcop" is the sequel to a promising, if not all there, high-concept tribute to '80s trash like Sylvester Stallone cop thriller "Cobra," and zombie-comedy "Dead Heat."

Unfortunately, while "Wolfcop" has some ingenuous qualities, the film relies too much on an ever-escalating pile-on of ridiculous plot developments. One can't help but feel like the film's creators wantonly mashed up a couple of sensational old tabloid stories, and then served those raw generic ingredients as a contrived, but easy-to-digest comedy full of aliens, werewolves, stereotypes, and dick jokes. But while "Another Wolfcop" is supposed to be funny because it's got so much fun stuff in it, its creators never have anything up their sleeves that's more substantial than a whole bunch of wacky, ill-timed, and fundamentally exclusive humor. This comedy doesn't just celebrate retrograde ideas: it's also consistently thoughtless, and poorly conceived.

In case you missed the first film in the Wolfcop saga: smalltown cop Lou Garou (Leo Fafard) is a useless drunk. He is also a werewolf. By day, Garou fights off hangovers and sometimes does menial policework in the inexplicably crime-ridden Everytown, USA of Woodhaven with the help of affable sidekick Willie Higgins (Jonathan Cherry) and uptight, but righteous lady cop Tina (Amy Matysio). By night, Garou becomes a werewolf after a local group of shape-shifting cultists abduct him, and uses in a Fountain-of-Youth-type ritual that requires the blood of a werewolf. I see you in the back, but please, there will be no questions. Somebody thought this story was funny, and that is the only reason it exists. Let's move on.

In "Another Wolfcop," Garou returns, but this time, Higgins—who is revealed at the end of "Wolfcop" to be an evil shape-shifting cultist collaborator—turns out to have been abducted, replaced, and anally probed by aliens. So the real Willie's not as evil as "Wolfcop" made him seem. Fine, that's a standard sitcom-level cop-out. But what do aliens have to do with werewolves? Not much, other than the fact that a group of evil lizard-alien microbrewers, assembled by local politician Sydney Swallows (Yannick Brisson), are trying to get the local townspeople addicted to "Chickenmilk Stout" beer, an insidious reagent that impregnates the locals with muppets-on-a-budget alien babies that look like evil penises, and burst out of their hosts' abdomens.

If that plot synopses sounds funny to you, all I can say is: I'm sorry. "Another Wolfcop" is the kind of bad movie that sounds amazing on paper, but is excruciating to watch, even at a brisk 82 minutes. This film throws so many misconceived gonzo ideas at viewers that it soon becomes apparent that its creators are implicitly relying on your good will to see you through their trainwreck of a werewolf buddy cop alien hockey comedy.

For starters: there are no memorable characters to latch on to. Garou was, in the first "Wolfcop," at least sympathetic enough. In fact, he was only singled out by evil shape-shifting cultists because their spell required a patsy who is essentially, in Garou's words, Woodhaven's "village idiot." But none of Garou's slovenly personality bogs him down in "Another Wolfcop," which uncritically celebrates Garou's brazen chauvinism, and makes frequent sport of the fact that Garou gets hit on, and mounted by Willie's were-cat sister Kat (Serena Miller). Garou's sophomore outing is overstuffed with lifeless jokes about his furry junk (including an explicit full frontal crotch shot), his Popeye-like mainlining of alcohol, and his colleagues' relative incompetence. Everybody in "Another Wolfcop" is supposed to be a bit of a bummer to hang out with...except Garou. This is especially unfortunate since Fafard, an amateur actor whose most distinguishing feature is his bushy, Eric Bogosian-like eyebrows, just isn't very charming.

Which leads us to the biggest problem with "Another Wolfcop:" none of its nonsensical individual elements come together because every joke is the lowest form of humor possible. For contrast's sake, look at the "Naked Gun" movies. Many people remember these films' inspired, surreal sight gags, and not their ridiculously white-male-centric humor. Still, these movies work as well as they do because they're made by guys who made a fine art of the reaction shot, amongst other things. The makers of the "Naked Gun" films are, in that sense, way more funny than their frequent jokes at the expense of women, Mexicans, and O.J. Simpson are politically objectionable.

But the creators of "Another Wolfcop" aren't in the same weight-class as those guys because they constantly go for obvious jokes that simply don't stick in your mind. The best joke in this film is a throwaway gag about how the cops' walkie-talkies all sound like the kind of garbled gibberish that the adults in "Peanuts" cartoons speak fluently. Unfortunately, this hilarious one-time gag is repeatedly run into the ground. "Another Wolfcop" may have all the elements of a fun night out, particularly a werewolf, jokes about the pretentious use of the word "curate," and yes, some bodily fluids, too. But it's not worth watching since its creators' keep trying to pull a loaded gun from their empty holsters. 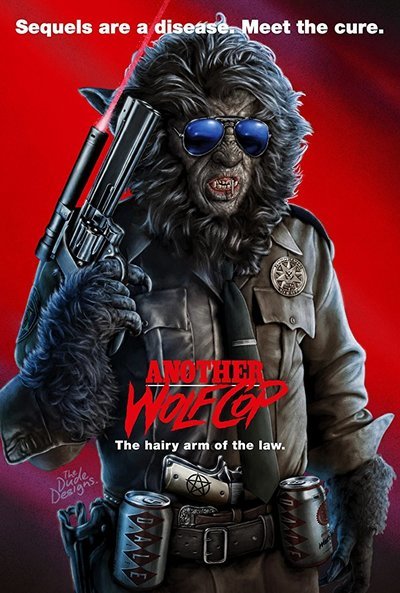