At some point, queasy horror-comedy "Another Evil" stops being about one man's comically vain attempts at exorcising his home, and starts being a weird character study about a laughably desperate wannabe exorcist. That shift in narrative focus is subtle, and not entirely successful since one can't help but wonder where schlubby family man Dan (Steve Zissis) went, and why he's no longer playing straight man to needy amateur demonologist Os (Mark Proksch). To be fair, Os is the more compelling of writer/director Carson D. Mell's two leads, and is certainly a more sympathetic, complex character. But that's not saying much given that Dan often just stares blankly in response to Os's latest outrageous claim (We need to use cursed boxes to catch a ghost! I need to stay in your house longer! You're my friend, please like me!). Os' hang-ups and tics are believable, but they're often expressed in such a monotonous way that even the movie's refreshingly atypical focus on character-driven neuroses over pat post-"Poltergeist"-style jump-scares can't save "Another Evil" from its creators' lack of ideas.

The first part of "Another Evil" is fairly rote. While exploring his house, Dan stumbles upon a ghost in a brief scene that looks like it was shot by a high school student on their iPhone (and not in the way that Apple wants you to think). The ghost is actually scary, looking like a refugee from a better, "Twin Peaks"-inspired horror film. But he flees almost immediately. Dan then tries to hire a cut-rate psychic named Joey Lee (Dan Bakkedahl, from "Veep"). Unfortunately, Joey isn't just a laissez-faire ghost-buster (he doesn't want to get rid of the ghosts because he says they're not malevolent)—he's also kinda slovenly and dopey in a very unfunny way. So Dan, now desperate, takes a recommendation from a friend, and tries out Os, a nebbish-y loner with little social graces, and a tendency of over-staying his welcome.

Os and Dan's relationship takes over the film's story. Except Dan's not really important for the middle portion of "Another Evil." Instead, Dan sinks into the plot's background as Os' desperation mounts. Once you realize that Os is basically the film's main subject, you realize that the haunting, such as it is, is just kind of happening. Oh, sure, it's a major plot point, as you'll notice just by tallying up all the different scenes that are told from various characters' subjective points-of-view. But getting rid of ghosts isn't Dan's biggest concern: he has to get rid of Os.

"Another Evil" is, in that sense, reminiscent of black comedies like "What About Bob?" and "The King of Comedy," except Mell's film is more obvious, and therefore less unsettling. You can figure Os out just by looking Proksch over. Bald, baby-faced, and wearing a cowboy hat, a leather jacket, and wire-rim glasses—he dresses like an adolescent misfit who now realizes that his mom isn't watching him so closely any more. Proksch scoffs and whines with such ease that he often makes it easy to overlook the fact that Os is defined by facile tics: a failing marriage, a competitive chip-on-his-shoulder, a desperate need to bond with another man. Os thinks he's an artist, so he's instantly attracted to/jealous of Dan, who paints abstract images of dark circles surrounded by various colors.

You're supposed to be able to read Os as easily as a pop-up book. But that psychological aspect isn't very funny, nor is it particularly incisive or compelling. Too many scenes are variations on a theme as Os tries to cozy up to Dan, and only winds up exposing himself more. He's a sad, lonely little man, and that makes for some modest laughs between gritted teeth.

Still, my mind frequently wandered as I watched "Another Evil." I kept wondering what Dan's deal was despite Proksch's considerable talent at stealing scenes. By contrast, you never really wonder what Richard Dreyfuss' psychiatrist thinks as he's trying to warn his family about Bill Murray's obsessive personality in "What About Bob" or what Jerry Lewis' comedian feels as he's being stalked by Robert De Niro in "The King of Comedy." But that's because the mania of Murray and De Niro's respective characters is so well-realized that your mind never strays from the ever-narrowing path that their creators set viewers on. Things get fittingly grim at the end of "Another Evil," as they inevitably must. But at that point, Mell gives Dan control of his life back, and lets him run away with a narrative that was only briefly about him. I want to recommend "Another Evil" more strongly, but it's just not involving enough to be worth more than guarded praise. 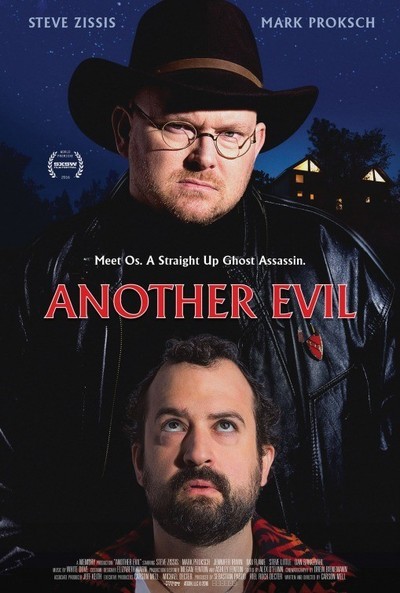