I can imagine that writer/director Andrew Niccol is exceptionally good at pitching his scripts. That’s all the more impressive given his fixation on high-concept sci-fi—but he knows how to give it a good hook. With 1997’s “Gattaca” it was, “What if your DNA determined your entire life?” Or with his 2011 action film “In Time,” he asked viewers “what if time actually WAS money?” His latest movie “Anon,” available on Netflix today, takes a spin on the idea of “the mind’s eye,” envisioning a not-too-distant future in which our first-person perspective is always on record. That means our brains are truly like computers and nothing is private—no invasive Facebook app needed.

Part of the thrill in watching Niccol’s movies is in seeing him thoroughly curate dreams of our future that play off like logical possibilities. And as Niccol uses grounded themes and noir-ish imagery, there’s often a wrench in the status quo. That’s the case with Amanda Seyfried’s shadowy title character Anon, who is off the grid in a world where you can learn all of someone’s information just by looking at them. She’s being pursued in Niccol’s very gray version of NYC by a police officer named Sal (played by Clive Owen), who accesses people’s memories to solve crimes. When he finds out that someone has been able to murder off the record by skewing with the victim’s POV, there’s a relief, if not an amusement in his voice: “We actually got ourselves a whodunit,” he remarks to a colleague, as if it were the first fun thing to happen on the planet in years.

There’s much more afoot here, which makes for a relatively thrilling first act. But this movie has the same problem as his other futuristic constructs, where Niccol trips over himself trying to explain his latest nifty contraption while using a hard-boiled investigation. Even with the vicious killings and the sparks that arise from Sal and Anon’s cat-and-mouse game, the investigative procedure of “Anon” can be as much as fun as listening to someone explain every single rule of a board game, when all you want is to just start playing. The script’s heady intent proves to be exhausting, reducing a third act twist to a shoulder shrug, and a seemingly profound final line about life off the grid into a blank expression.

Providing some momentum to the proceedings, Owen and Seyfried both devise curious characters, people from contrasting sides of an open-book society. The film’s best moments in particular have Owen portraying the shock and paranoia of having your vision compromised while being fully conscious, or more specifically, to be unsure if what you’re looking at is just someone hacking your mind.

But with a tediously less clear character objective, Seyfried is given far less to work with, even with her character’s mysterious nature. She’s more of a mascot of the script’s fully-functioning male gaze, which later pairs the 52-year-old Owen with the 32-year-old Seyfried without blinking. Along with the typical grizzled, pulpy existence of Sal, “Anon” recalls the the goofy machismo of “Gattaca” in particular, which you may remember had a sincere story climax involving two brothers having a swim race.

And I’d believe it if this story was first conceived decades ago—whatever fire Niccol had when he was imagining this project has faded by the final product. It’s not just the desaturated, stone-gray aesthetic, where the police station looks more like a barren temple, or that the life has been squeezed out of New York City to make its dullness feel dystopic alone. It’s the way that the movie feels so cold, and incurious, despite its incredible detail (it’s a rare Netflix original film where constant pausing might make it even better) dynamic cinematography (using wide and full aspect ratios for narrative purposes) and general glimmers of newness. With "Anon," Niccol still has a catchy passion for original, high-concept sci-fi. I just wish it all made for a far more interesting execution. 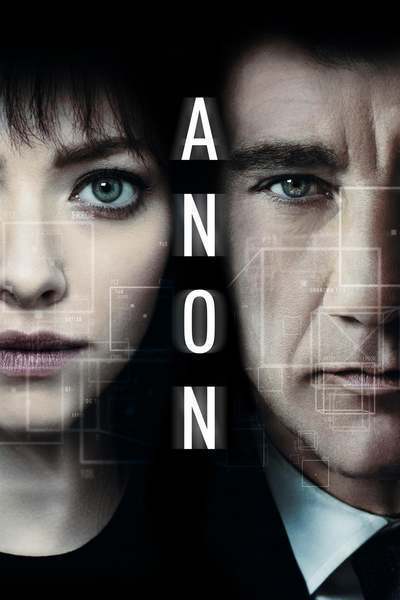 Amanda Seyfried as The Girl