If the surreal dreamscapes that propelled "Inception" had taken place in the deep, dark and dubious recesses of a disturbed adolescent girl’s mind, it would look a lot like "Anna." It's as messy as a teen’s bedroom and packed with all manner of distracting clutter that needlessly burdens a plot.

This psychological thriller concerns a so-called memory detective, John Washington (played by Guy Ritchie regular Mark Strong, a rugged Jason Statham type but with more soul and less scowling), who can remotely view the flashbacks of his subjects and brilliantly deduce details about their cases. But he has been off his game after suffering a stroke during a session gone awry. That’s on top of grieving over the suicide of his wife.

After a two-year break and depleted funds, he agrees to enter the mind of Anna (Taissa Farmiga, a formidable presence who looks like a mini-me version of older actress sis Vera), a 16-year-old who is both "gifted" and "haunted," as we are so informed. Locked in an upper chamber of an imposing mansion like a Disney princess and kept under constant surveillance, she has been on a hunger strike for a week, has engaged in cutting herself and—perhaps—was involved in questionable acts at her school. His assignment: To pinpoint whether a trauma is at the root of her behavior or if she is a potentially dangerous sociopath who needs to be sent off to an institution.

Naturally, Anna’s family is more Addams than Brady. Her doubting stepdad (her father died before she was born) appears to be having an affair with the housekeeper (who, for some reason, wears a French maid’s outfit straight out of a Halloween catalog) and would control Anna’s inheritance if she is sent away for treatment. Meanwhile, her caring mom drowns her disappointments with drink.

As we tag along on the journeys into Anna’s past, we see possible triggers, including such images as being locked into a closet and bleeding while holding a dripping letter opener. But more troubling is John’s discovery, after doing some actual research, that a teacher had taken inappropriate photos of her and that a fellow student has accused her of a vicious attack.

The saving grace of Anna is the cool, calm and collected air that Strong and Farmiga maintain as he struggles to unearth the truth. Yes, this is a cat and mouse game, a battle of wills where we are to think that the rodent might be in charge. The two actors, who each possess a magnetic screen presence, make for intriguing foils as they challenge one another.

However, it is hard to believe that it takes so long for Strong’s character to even question Anna’s motives, even after the audience does, despite any sympathetic feelings he might have for her as a fellow victim of a damaged psyche. For a supposedly ace sleuth of the subconscious, John is oddly unsuspicious, especially when it appears that Anna might be more fond of him than she should be.

Even more disappointing, instead of any effects that are truly special given the visual opportunities this premise offers, Spanish director Jorge Dorado leans heavily on repeating certain thematic symbols over and over, presumably providing clues, or maybe red herrings, that instead only prove confusing. There is water—rain storms, the sea, tap water overflowing out of tubs and basins, showers, flooded floors; stairs, especially the massive spiral one in Anna’s home. The splashes of the color red materialize on lips, roses, blood, rugs and Anna’s sketches. And clocks—along with a metronome—complete with nervous ticks and tocks. But even with such tricks as quick cuts, shadowy figures, distorted sounds and images, nothing really gets under your skin.

And, save for the two leads, the performances of the rest of the cast—including, most surprisingly, the usually commanding Brian Cox as John’s boss—are not much better than Lifetime Channel level. What is most frustrating is that Dorado denies us any real element of surprise or revelation as he exposes the pieces of his muddled puzzle.

"I’m not a sociopath," Anna claims. "Just smart enough to think like one." If only "Anna" the movie were that smart, too. 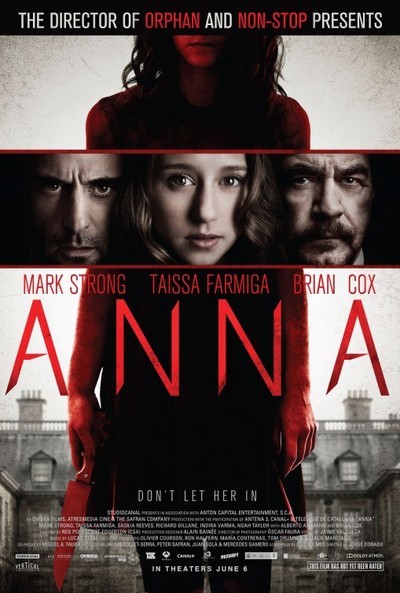