Try to picture classically trained Shakespearean actor Sir Ian McKellen singing and dancing in a musical number backed by showgirls, wearing "Buns of Steel" underpants, and conspiring with a motorcycle-riding crook played by the very not-classically trained Gilbert Gottfried. No? Well, directors Tony Bancroft, Jaime Maestro, and Scott Christian Sava, who also co-wrote, have pictured it for you in the colorful and charming "Animal Crackers," the story of a magical circus, loosely based on Sava's graphic novel.

McKellen voices preening, pompadoured Horatio P. Huntington, ringmaster of the Huntington Brothers circus, who dreams of fame and fortune. His kind-hearted brother, Buffalo Bob (James Arnold Taylor) runs things backstage, and all he cares about is entertaining the audience. They become rivals for the affections of the beautiful Talia (Tara Strong), and when she agrees to marry Bob, Horatio leaves the circus in a fury. But a magical gift box from Talia's aunt (voiced by Harvey Fierstein) helps to make the circus a hit. The human performers include Chesterfield the clown (Danny DeVito) and Bullet-Man (Sylvester Stallone), who gets shot out of a cannon and, relatedly, has broken all 206 bones in his body. But the stars of the show are the animals, and the audiences adore them.

The biggest fans are Bob's nephew Owen (John Krasinski) and Zoe (Emily Blunt), the daughter of a wealthy dog biscuit-magnate (Wallace Shawn). They meet as children in the circus audience and fall in love. Owen is miserable working for Zoe's father as a dog biscuit taste-tester. When the circus burns down, Owen is presented with a box that contains magical animal crackers. Eat one, and you turn into the animal it represents. A cookie miniature of your human form appears in the box, for you to eat when you want to turn back—unless something happens to it. Be very careful about the broken cookies.

Zoe happily quits her father's company to run the circus, but Owen stays on, working on people-food-flavored dog biscuits with a shy but brilliant scientist named Binkley (Raven-Symoné). But audiences are bored by the acrobats and clowns. They want to see what the circus is famous for—the animals. Cue Queen: "Don't Stop Me."

Everything moves along briskly, punctuated with colorful characters, animal and human, and lively musical numbers. We don't waste any time worrying about why, for example, one brother has a British accent and the other doesn't, how "nephew" Owen seems to have no parents or what might be the source of the magic. As Chesterfield not-explains, "Gypsy curse, stale flour, radioactive sugar mites—who knows? Who cares? It's magic!" But there are details that reward our attention. Owen's blue hair shows through his animal transformations with blue eyebrows whether the animal has fur or scales.

By the time it dawns on you that a subplot drags a little, with Owen's dog biscuit experiments constantly sabotaged by his rival Brock (Patrick Warburton in the film's most thankless role), you're back in the middle of Horatio's plot or watching Owen transform into a bear, a horse, a fish, or a lion. McKellen gets a great villain "I want" song called "It Should Have Been Mine." And he and Gottfried have fun arguing over which of them is the henchman. Stallone is funny in a Groot-like role where all he can say is his own nom-de-circus, Bullet-Man, until ... he says something else.

The character design is about average but the action scenes, especially the circus acts, montages of animal transformations, and a big climactic confrontation near the end, are energetic and staged with a strong sense of space. No matter how many shapes Owen takes, Krasinski's essential everyman always makes it warm-hearted and engaging. He may be surrounded by the fantastic and silly but his humanity, even in animal form, is what brings the movie to life. 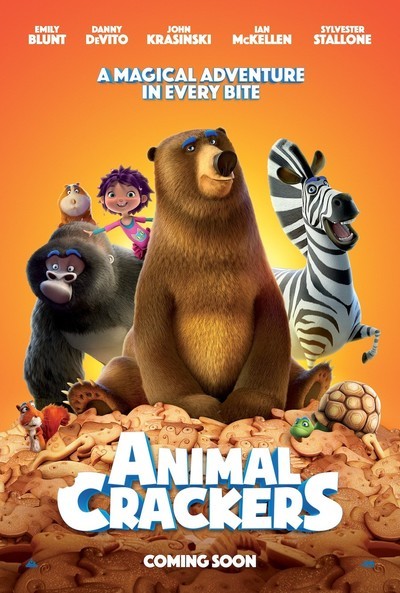 Writer (based on the graphic novel by)