The sleepy, dopey action bonanza “Angel Has Fallen” is disappointing, and not just for the reasons you might expect. Being the second sequel to “Olympus Has Fallen,” “Angel Has Fallen” doesn’t even have a high bar to clear. “Olympus Has Fallen” was a by-the-numbers revenge-fantasy about ruthless North Koreans and emasculated, savior-thirsty Americans that’s mostly distinguished by its considerable displays of over-the-top violence. Basically, America is graphically imperiled for the sake of confirming a slogan coined by then-interim President Trumbull (Morgan Freeman): “As a nation, we are never stronger than when we are tested.”

“Olympus Has Fallen” is, at the very least, a credible survivalist wet dream. In that movie, America is (temporarily) made great again, but only after the Washington Monument is toppled, the President is tied up, and the Secretary of Defense is punched in the face and kicked in the belly, right before she’s dragged across the floor as she defiantly screams the Pledge of Allegiance. To defeat the North Koreans, Banning does what no officially sanctioned US agents can: he kills a bunch of bad guys without any remorse or reprisal, like the North Korean hostage that he shoots in the head, just to spook the other North Korean agent he has tied up (“Your friend seemed like a funny guy”). “Olympus Has Fallen” isn’t a good movie, but I couldn’t stop watching it.

By contrast: I couldn’t wait to stop watching “Angel Has Fallen,” an indifferently assembled cash-in shot with way too many shaky, unfocused close-ups which seem designed to re-assure viewers of this otherwise bland drama’s surface-deep intensity. Being a timid lament about contemporary American trust issues (the Russians are to blame, but almost incidentally), “Angel Has Fallen” sics Banning—now rickety from concussion-induced migraines and insomnia—on a group of disloyal American mercenaries led by, well, you’ll figure that part out soon enough.

The makers of “Angel Has Fallen” don’t seem to care as much about their characters (or patriotic ass-whoopings) like their predecessors did. Instead, we get a few tentative signs of introspection from Banning—he’s sick, has a family to protect, and an estranged dad, too!—that are immediately glossed over for the sake of pumping up a few flat set pieces that hail from the Tony Scott School of Frenzied Action Filmmaking, only they’re not as dynamic or good-looking as Scott’s jittery photography. If you’re going to be mean-spirited and exploitative, at least do it convincingly.

The makers of “Angel Has Fallen” struggle most when they have to make Banning look like a rebel who also knows that he must inevitably “ride a desk” to retirement. Their version of Banning is more like John McClane in “A Good Day to Die Hard” than in “Die Hard 2: Die Harder.” He complains (and periodically shows symptoms) of the action-movie equivalent of PTSD, but never succumbs to those ailments, especially not when he needs to cut through handcuffs, light up a phalanx of armed mercs, or run away strategically. This is apparently what life is like for a trained ex-soldier: a sad, vague awareness of your own mortality that’s mostly off-set by shoot-outs, drone attacks, and improvised explosions that confirm your megalomaniacal sense of self-worth. After all, Banning’s got an important job to do: protect Trumbull, a steadfast leader who vows to never rush our nation into war, but also wants us to be ready in case it’s ever Boom Boom Go Time. Banning’s moral righteousness sharply contrasts with the movie’s immoral, Russia-colluding baddies, all of whom sell out their country because they miss going to war and also really like money.

I’d care more about Banning and his values if his creators had invested more care into their movie’s action scenes, dialogue, characterizations, and basic plot. The editing and sound design is fine enough, but that’s about it. Close-ups of Butler's and Freeman’s blotchy-but-determined faces only hammer home the movie’s general please-like-me desperation, as do action scenes that over-stress smoke, gunfire flashes, and flying debris instead of choreography, visual coherence, or human personality. Even the scenes where Banning’s dad (no spoilers!) blows up some faceless goons somehow feel perfunctory and underwhelming.

These key moments, like any scene featuring great character actors like Tim Blake Nelson and Lance Reddick, are raced through with negligible conviction and even less inspiration. If this type of no-brow entertainment is your thing, you may find something to like in “Angel Has Fallen,” but that doesn’t mean you need what these guys are reselling. 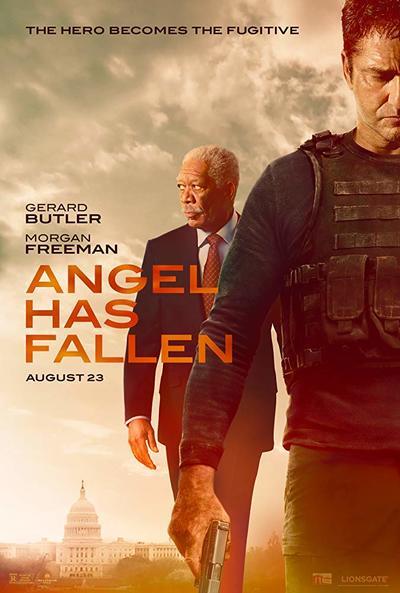