Andre Gregory: Before and After Dinner

In a summer of reboots and sequels, the documentary "Andre Gregory: Before and After Dinner" is not "My Dinner with Andre Part II," tantalizing as that prospect would be (it certainly might help move those lamentable "Andre" action figures hawked by Corky St. Clair in "Waiting for Guffman"). But it does reunite the renowned experimental theater director with his former cinematic dining companion and decades-on artistic collaborator, Wallace Shawn, for yet another iconoclastic immersion in the creative process that recalls their last cinematic partnership, Louis Malle's 1994 "Vanya on 42nd Street."

At times thrilling and electric, these are the most satisfying portions of "Before and After Dinner", and have wisely been made the focus of the documentary's trailer, which conceals conceals a documentary with too much on the menu.

Directed and narrated by Cindy Kleine, Gregory's wife, "Before and After Dinner" initially purports to be about their unexpected love story. When they met, she was 39 (and had sworn off men, she states for dramatic effect), and he 63. Doing the math, she figures that when she was born, he was getting married to his first wife, and when she was three, he was becoming a father.

But then we're on to the main course, ongoing rehearsals and workshops of Shawn's adaptation of Ibsen's "The Master Builder." They've been at it, Gregory states, for 14 years. Gregory and ensemble (which include Shawn in the title role, Lisa Joyce and Julie Hagerty) are seen at work fleshing out scenes in an apartment. For Gregory, as was demonstrated in "Vanya," it's all about creating a supportive environment for the actor. It's the art, he states, "of being and not the act of performing. I create a playground for demented children where there are no mistakes and no judgment."

Filming him directing, he suggests to Kleine at one point, would be boring. Far from it. Watching a scene, Gregory's eyes dart intensely, his fists clutch, his hands eave as if he is a conductor. He grunts approvals, pushing and seemingly willing his actors on. "All you need is a tiny room and a few friends and you can make a miracle," he states.

What impact Kleine's camera had on this process is suggested in a candid moment when an annoyed Shawn cuts short a tete-a-tete with another actor after he notices the camera trained on him.

If this was all with which "Before and After Dinner" concerned itself, it would have made an excellent companion piece to Jonathan Demme's upcoming film of a performance of "The Master Builder," along the lines of Les Blank's "Burden of Dreams" which chronicled the making of Werner Herzog's "Fitzcarraldo."

But that's not all folks: Kleine also delves into Gregory's biography, focusing intently on his relationship with his emotionally removed parents. "My theatrical work," he elaborates "is an ongoing meditation on the most frightening person in my life; my father." So not only will aspiring and working actors and directors have an instructive field day with "Before and After Dinner," but psychologists as well.

As a further dramatic tangent, Kleine chronicles Gregory's investigation into suspicions that his father and uncle collaborated with the Nazis, checking in periodically with researchers in Paris and Berlin on their progress.

But Kleine's ruminations on her and Gregory's relationship are "Before and After Dinner's" weakest ingredient. She expresses a kinship with Gregory over their tumultuous family lives (Her previous feature was a documentary about her parents, "Phyllis and Harold," a framed poster of which not so subtly cameos in the background throughout the film).

Kleine is no doubt integral to Gregory's story, but her self-referential intrusions distract from Gregory, and the more compelling business of watching "The Master Builder's" progress, or Gregory coming to terms with his father and his childhood, which he jokingly likens to "The Shining."

Gregory himself is a fascinating subject and at 79 remains, as Ebert noted in his review of "My Dinner with Andre," "a spellbinding conversationalist," never more so than in an anecdote about how he auditioned for Martin Scorsese for the role of John the Baptist in "The Last Temptation of Christ." It's a rollicking tale involving nudity and madness. Tellingly, Kleine presents excerpts from the actual audition tape to reveal a much different story.

"Before and After Dinner" includes a wealth of archival interviews, rare footage of his legendary 1970 production of "Alice in Wonderland," film clips (cringe-worthy scenes of his appearances in the Goldie Hawn comedy, "Protocol," and "Demolition Man" that illustrate perhaps his advice to young actors that "You have to make a living") and revealing moments that literally strip him bare.

Unlike "My Dinner with Andre," "Before and After Dinner" is not fully satisfying, but it does offer a rich portrait of the artist as an ever-seeking explorer. 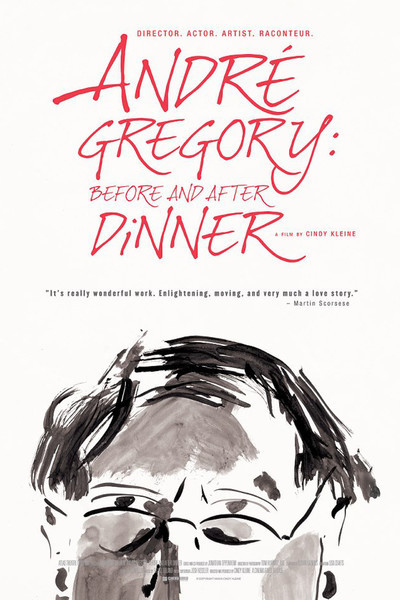 Andre Gregory: Before and After Dinner (2013)

Andre Gregory as Himself

Wallace Shawn as Himself