Grief is an untapped vein in “An Unquiet Grave,” a modestly-scaled horror movie whose dark mood reflects an equally bleak premise: how far would you go if you thought that you could use a family member to cope with your private grief? That’s the crux of this supernatural character study, though it’s often hard to know if that question, or any others weigh on the mind of Jamie (Jacob A. Ware), an anxious widower. A year has passed since the accidental death of Jamie’s spouse Julia, but his grief has only made him more self-absorbed and withdrawn. He revisits Julia’s grave, where he meets up with his equally shell-shocked sister-in-law Ava (Christine Nyland). And despite some mutual reluctance, Jamie and Ava agree to follow through on a ghoulish pact: they’re going to bring Julia back from the dead. Unfortunately for Ava, Jamie’s plans aren’t what they seem.

Jamie and Ava are trapped by their own suffocating uncertainty, as well as a shared hope that taking some kind of action is better than doing nothing at all. That’s where the plot of “An Unquiet Grave” begins, and while I don’t want to spoil things for interested readers, I will say that horror fans who already love “Pet Sematary” and “Hellraiser” will probably get a kick out of this movie, and may even be surprised by it.

Unlike a lot of recent indie horror movies, “An Unquiet Grave” doesn’t feel bogged down by the last few decades’ worth of American horror. It’s a spare, dread-filled mood piece whose just-so dialogue, too-tight close-ups, and deceptively subdued pacing all tease out small, but essential details from both of these elusive central characters. Jamie and Ava are more like emotional lightning rods than audience surrogates: he knows more than he lets on, and his actions inevitably force her to become a mirror for his carefully concealed emotional state.

You can also hear some unresolved tension in the way that he corrects her, after she hastily describes her twin sister’s death: Julia didn’t die in her car, “she was thrown” from it. Jamie puts a blindfold on Ava, and avoids any unnecessary hand-holding while they complete ... well, some sort of arcane ritual, the kind that requires burning sage, a disinterred body, and some fresh blood. “Nothing’s happening” Ava says right before something unbelievable occurs. “Jamie?” she asks over her shoulder. “Jamie, say something.”

Thankfully, “An Unquiet Grave” is less about this event than what happens afterwards. This isn’t a show trial of a movie, in other words, and we’re not asked to make easy assumptions about two obviously unbalanced characters. Instead, writer/director Terence Krey and co-writer Nyland encourage viewers to jump feet-first into an already out-of-control scenario, and watch as Jamie and Ava struggle to find their own bearings.

Like some of the best in micro-budget horror, “An Unquiet Grave” is more about what’s being concealed than what’s being revealed. If this movie works for you, you’ll spend more time wondering what will happen next instead of what you’re supposed to be feeling. That sense of anticipation is pretty key in a film that asks viewers to hang out with two emotionally exhausted protagonists. Jamie and Ava have already been on the edge for some time; we’re just catching up to them.

We’ll never know how long or exactly what circumstances made Jamie and Ava behave the way they do, but we do know how scary it is to be hear leading statements like “You can’t just pretend it didn’t happen” and “There’s something outside. I didn’t get a good look at it, I didn’t see.” That kind of suggestive, fragmentary dialogue reminds us that we are on the outside of Jamie and Ava’s grief. They’re trapped inside themselves, and are desperate to break out. “It feels like it’s on me,” Ava says later on, though by this point she’s not quite herself. “It feels like it’s holding me together.”

As you might have guessed, I’m trying to avoid discussing the plot of “An Unquiet Grave” since being on the outside of a very insular story is a large part of this movie’s appeal. Sometimes, the restricting nature of the movie’s sketch-like details—both visual and narrative—can be a little suffocating. But for the most part, “An Unquiet Grave” is as absorbing as it is focused. It’s the kind of unassuming high-wire act whose sustained mood is especially impressive given that its creators only sometimes draw attention to their hyper-pared down style. My favorite scene in this movie boils down to a few spare images of unoccupied, mood-lit furniture—the living room couch, an unmade bed—and the repetitive thump of a spade hitting pay dirt somewhere off-camera. That setup may not sound impressive, but if you’re in the right mood, it should be more than enough. 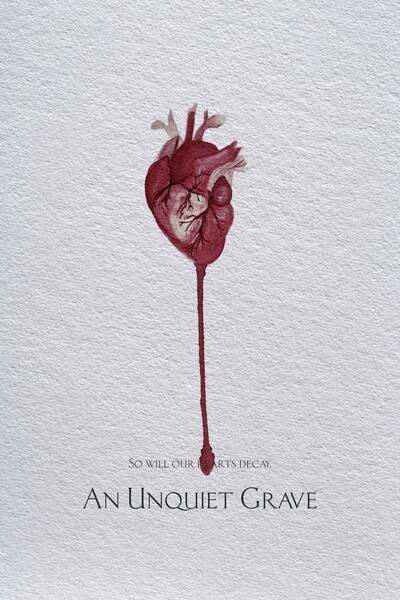 Jacob A. Ware as Jamie