“An Awfully Big Adventure" is a soggy British drama set in the lean years after World War II, when everything was still rationed, especially, it would seem, cheerfulness. It takes place in Liverpool, a provincial town, served by a provincial theater that defines the very essence of provincialism, since everyone associated with it keenly feels his or her distance from London.

"You are," the theater director assures his cast on the first day of rehearsals, "the very best people we could find - for the money." They look glum at this news, but not surprised. The director, named Meredith Potter and played by Hugh Grant, is himself a damaged piece of goods - a bitter, chain-smoking man whose emotions are reined in too tightly because, we suspect, he once let them out too loosely, and got hurt.

Into this morass wanders a stage-struck local girl named Stella (Georgina Cates), who will take a job, any job, just to be near what she sees as theatrical glamor - and, in her town, she's right. She gets hired as the assistant stage manager, and soon begins discovering and guessing the various secrets of the company - although some very big ones are saved for the end of the film. And she becomes the object of passes from some of the men in the company, although she has a rather chilling effect on one when she replies to his advance, "I don't like the feeling of it, thank you very much." Stella is not the most attractive of young women, and some critics have faulted the film because members of the company are drawn to her. They miss the point, which is that in their desperate situation, emotional beggars can't afford to be choosers, andStella's relative innocence and naiveté make her glow in contrast to the weariness all around.

The company struggles through its repertory season, until a mishap leaves them shorthanded. There is nothing to do but call on the legendary P.L. O'Hara, played by that invaluable British character actor Alan Rickman as a man of great talent who has lost his way, and who masks despair with cynicism.

Rickman (a villain in American movies such as "Die Hard" and "Robin Hood: Prince of Thieves") is the company's former resident villain - the best Capt. Hook anyone has ever seen. Soon he has his hooks in poor Stella, who is not so much defenseless as cooperative; she surrenders in anticipation of his attack.

As a portrait of the company and its emotional tangles, "An Awfully Big Adventure" has a gritty authenticity; it's based on a novel by Beryl Bainbridge, who may be transmuting some of her own early experiences. But as drama and melodrama, the movie stumbles.

The surprising revelations at the end are so enormous that, in all fairness, they belong nearer the beginning; the whole film is a warm-up for a third act that never happens.

The movie was directed by Mike Newell ("Enchanted April," "Four Weddings And A Funeral"), who grapples with the problem that no one in the movie is especially nice. Hugh Grant, who made this film before "Four Weddings," has recently had to face the criticism that he works too hard at being ingratiating and likable. Not in this film; along with "The Englishman Who Went Up a Hill and Came Down a Mountain," it shows that he has range as an actor. But his character desperately cries out for others who will be counterpoint, instead of harmony, to the general gloom. 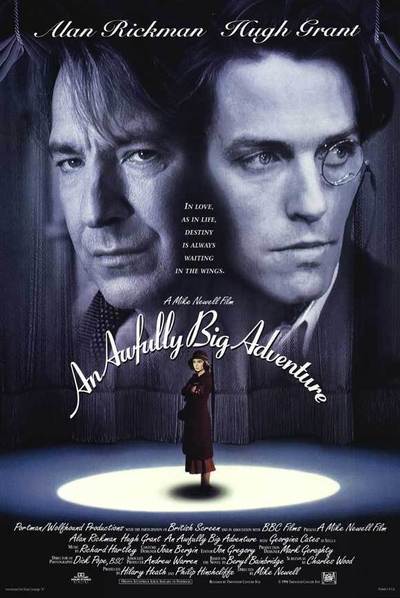