Michael and Mark Polish’s “Twin Falls Idaho” announced the arrival of major new talents, and their follow-up, “Northfork,” was an even more impressive affair. Lyrical, poetic and dramatically engaging, “Northfork” divided critics, but those on its wavelength really connected with the film. It’s hard to see many people connecting with Michael Polish’s latest, the frustrating and ultimately annoying “Amnesiac.” Even the barely-released “Big Sur” (the director’s last film) had the visual confidence the filmmaker displayed in previous works, even if it was unsatisfying. Much like “Self/Less,” “Amnesiac” feels like a director-for-hire gig for an artist too talented for the job.

Two people exchange furtive glances as a girl we presume is their daughter sleeps in the backseat. The music swells as they drive along an empty highway. Who are these people? Why are they so nervous? Polish does a solid job of setting tone immediately. Something seems wrong. Are they on the run? They glance back one too many times and the girl screams.

Cut to an old house without much furniture. The man (Wes Bentley), who goes unnamed through the piece, now lays in a bed in a poorly lit room. He’s been injured. He has no memory of who is or what he’s done. The woman (Kate Bosworth), also unnamed, takes care of him. Her hair is tight in a bun, she wears business shoes and attire. She closes all the shades in a room that appears to only have a bed. Clearly, something is not normal here. The music, the tone, Bosworth’s dead-eyed delivery—it all hints at a “Misery” situation—perhaps the man has been kidnapped by the woman now claiming to be his wife—or something even crazier. And where is the girl who was the back seat?

Things get stranger before the plot settles into its Time to Explain Everything Act, and this odd, Lynchian chapter of the film is clearly of the most interest to Poland. The Woman is constantly spouting non-sequiturs and odd bits of trivia (you’ll learn why you don’t see B batteries, for example), and Bosworth has a terrifying way of saying things like “Elephants are dying of coronaries” in a blank, creepy affect. Of course, it’s not long before the Man suspects things are not what the Woman claims them to be, and not long before he finds a body in the cellar. From here, “Amnesiac” kind of falls apart, strained by the length of a feature film imposed on a short film screenplay. There’s just not enough to “Amnesiac” and the strained narrative simply comes apart, especially in awkward inserts in which a police officer answers phone calls that may be related to the case that are simply ridiculous and kill the tone of the rest of the piece.

There are glimpses of the B-movie chaos that could have sprouted from “Amnesiac.” There’s one scene in particular, in which Bosworth dons a fur coat and carries an electronic hacksaw, that takes the Grand Guignol approach the whole piece needed. Instead, “Amnesiac” falls into that chasm in between gory, ridiculous fun and realism. We have no reason to care about the Man and Woman, and less so as the mysteries of the story reveal themselves. The story doesn’t provide it, and neither does the filmmaking. Buried under the dullness is a fun performance from Bosworth and the occasional visual flair from Polish that he used to imbue in every frame. The rest of “Amnesiac”? Pretty forgettable. 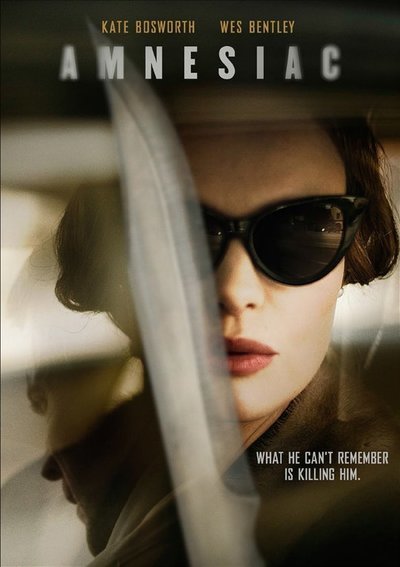