Is the death penalty justified punishment or merely a perpetuation of a cycle of violence that has become so ingrained in American society that it can’t be stopped? It’s a theme commonly returned to in fiction and film, including the remarkably incompetent “American Violence,” which pretends to be interested in exploring complex issues about how violence begets violence but is so poorly made that one has to push their way past so much amateurish filmmaking just to find an issue or two worth discussing. This is a bizarrely inept film, one that includes dialogue that most teenagers would have edited and a plot that strains credulity at every turn. There are plenty of true stories that one could use to shine a light on the arguable hypocrisy of a system that takes an eye for an eye, but “American Violence” seems defiantly unconcerned with addressing the actual issues at play, delivering a generic crime thriller instead. And a bad one at that.

If you struggled with Denise Richards playing a nuclear scientist in “The World is Not Enough,” you may equally have trouble buying her as Dr. Amanda Tyler, a renowned psychologist asked to speak to a man on death row named Jackson Shea (Kaiwi Lyman-Mersereau). The request to Dr. Tyler from Ben Woods (Columbus Short) is mere PR—they want to say they spoke to him before considering a stay, but aren’t that serious about the issue—but Tyler takes it seriously. She sets up with Shea much like Clarice set up with Dr. Lecter in “The Silence of the Lambs,” right down to the standalone cell in the middle of the room. However, that’s where the comparisons to Demme’s masterpiece stop for director Timothy Woodward Jr., who isn’t nearly interested enough in the doctor-psycho relationship. In fact, the structure of the film, in which we see Shea’s life story in flashback, basically sidelines Richards for most of the film. Believe it or not, that’s a complaint.

Shea’s story is as generic and predictable as you’d expect it to be. It opens with him being abused by an uncle as a child; moves on to a criminal enterprise in which he and a buddy robbed doctors who were taking cash payments and then billing insurance companies; features him crossing paths with an even-tougher bad guy; gets a woman involved, of course; and even gets a sequence of prison rape and an evil warden (played with why-am-I-here nonchalance by Bruce Dern). It’s one of those films in which even the flashbacks can’t stay consistent. There’s a scene between a tough guy that Shea robbed and some cops that can’t really exist in Shea’s flashback story to Tyler because he’s not there.

The performances are uniformly bad from top to bottom in “American Violence,” although one starts to feel sorry for the cast given the dialogue they’ve been asked to deliver. Two favorites are “We’re all just caged animals … with animal instincts” and “The only reason you’re still alive … is I haven’t killed you yet.” Shea’s story just isn’t interesting thematically or narratively, and the film’s only bright spot comes when New England Patriots all-star Rob Gronkowski shows up as a tough guy. It’s not that Gronk is particularly good (although he cuts a striking enough figure to buy him as a bodyguard) but at least it’s something to stop the boredom. Then he’s gone again and we’re back to the clichés and the pretension. “American Violence” is one of those truly awful films that not only has nothing to say, but can’t even be entertaining as B-movie pulp. 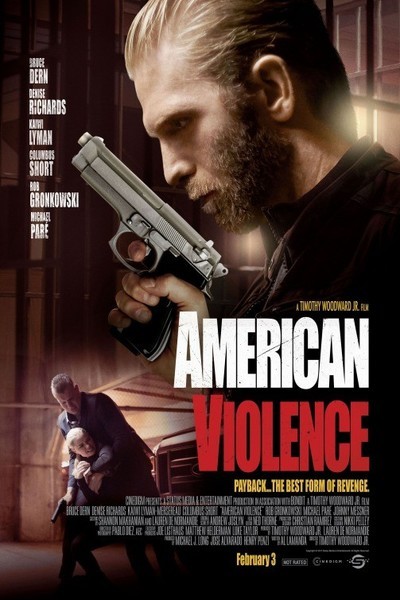