The opening title of “American Son” deems it a “Netflix Television Event” rather than a movie. Replicating the cast of the Broadway production of the play of the same name, written by Christopher Demos-Brown, the action is set in the lobby of a Miami police station on a night when it’s raining cats and dogs. The uncredited production designer provides a credible cinematic environment—what’s going on outside the windows looks like real precipitation—but this still, despite director Kenny Leon’s manipulation of focus to change the stresses of certain shots, feels like a filmed play right off the bat.

Before taking us to the grim lobby, it presents a quote from Ta-Nehisi Coates: “Race is the child of racism, not the father.” If only life were so simple that an intelligent citation at the beginning of a film, or a filmed play, were a guarantee of an intelligent film, or filmed play. There are alas abundant examples of this not being the case. The odious recent “Cuck,” for instance, begins with an adage from Immanuel Kant.

Waiting with great anxiety in the police station lobby is Kerry Washington’s Kendra, whose teenage son Jamal has been gone from home far too long for her comfort. Gumming up her works even further is a young white police officer, Larkin, played by Jeremy Jordan, who alternates obfuscating “I can’t tell you that” evasions with condescending entreaties to calm down. He wants her to wait for another officer to get to the station to fill her in—in four hours.

Kendra bristles when Larkin asks if Jamal has a “street name.” Jamal, the successful academic would have you know, tears up at Emily Dickinson. Larkin says he likes Emily Dickinson too, and reels off the opening sentence of “A Tale of Two Cities.” Kendra corrects him—“That’s Dickens.” “I’m pretty sure it’s Emily Dickinson.”

Did something just go “thud” in your brain when reading that, like a great sixteen ton shoe, clomping on a field of dirt and kicking up all manner of dust? If so, you might not want to watch “American Son,” because that is just the beginning. A few minutes later, Larkin directs Kendra to a water fountain. “There are two water fountains,” he clarifies, a little shyly. There’s a plaque above the fountains, commemorating the work of what he calls “The Big Five.” “The Big Six,” Kendra corrects. Yes, Larkin says, and all that the likes of Ralph Abernathy did for ... and then he pauses. Yes. He’s about to say “you people” but he stops himself and just says “people.” But never in the history of telegraphing have you seen telegraphing quite like this. Almost all the acting here is pointedly overstated, as if the performers are trying to project past an especially long proscenium.

At this point, it becomes clear that “American Son” is a kind of chamber version of “Crash.” Soon Kendra’s estranged husband, Scott (Stephen Pasquale) shows up, and he’s both white and an FBI agent, for a double bingo. That Larkin treats him with unequivocal respect and welcome is the first never-saw-that-coming point the drama hammers on. Rather less credible are the arguments Scott and Kendra get into. When they were a couple, they put in special effort to raise the child “right,” which, to Scott’s mind, meant keeping him utterly insulated from what he considers the corrosive influence of black culture. The work is not able to address this particular hornet’s nest with any depth. What comes across more strongly is a deep flaw in the conception of the argument. When Scott decides to try and relitigate the actual naming of their child—he wanted to call the baby Seamus while Kendra wanted to give him the name of her dead brother, and she won out—you start wondering how this couple managed to last twenty minutes into their first date, let alone stay married for over fifteen years.

Then we get into a discussion of Jamal’s emerging anti-cop politics, which may be based in genuine Black Lives Matter politics or which may have emerged because of his father’s perceived abandonment. And what about West Point? No, I’m not making that up.

To complete the quartet is a second, older police officer. Himself a person of color, he’s a very schematic fourth in this dramatic bridge match of both-sides-ism, pointing out that the police officer who pulled over Jamal’s car, which is decorated with an ostensible anti-cop bumper sticker, was black. After which he delivers a few more unenlightening pieties.

All these “what incredible irony!” moments are designed to…well, I’m not quite sure. The movie’s final line, an appropriation of the dying words of a black man killed by police, is an exploitative and cheap reversal that legitimately addresses precisely nothing. 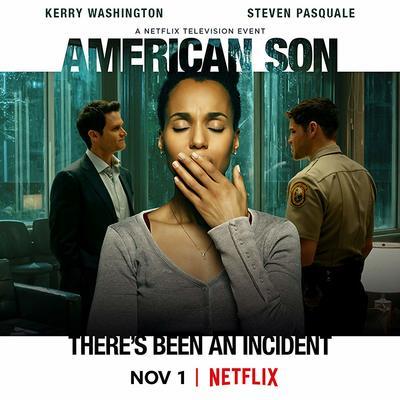