Here there be spoilers! Proceed at your own risk.

“This is not based on a true story,” the onscreen title informs us at the beginning of “American Animals.” “This is a true story.” This is also a rip-off of “I, Tonya,” except instead of having the actors appear in the documentary-like segments interspersed between the scenes, “American Animals” interviews the actual people who committed the crimes it dramatizes. Writer-director Bart Layton treats this device as a cutesy conceit, but it plays more like Clint Eastwood’s “The 15:17 to Paris” crossed with a low-rent “Bonnie and Clyde.” At least the men in Eastwood’s film played themselves in the re-enactment—and are heroes, to boot. “American Animals” saddles us with four smirking, privileged men who, simply because they were bored with life in Lexington, Kentucky, decided to beat the piss out of a vulnerable older librarian in order to steal a $12 million book too big for them to carry. And we’re supposed to feel sorry for the crooks.

The criminals in question are Warren Lipka, Spencer Reinhard, Chas Allen and Eric Borsuk (played in the dramatic scenes respectively by Evan Peters, Barry Keoghan, Blake Jenner and Jared Abrahamson). Layton allows them to tell their story, and when one person contradicts another, he rewinds the film a la Michael Haneke’s “Funny Games” to make the corrections. The actors adjust accordingly while the film builds a flimsy case for our sympathy. Warren’s folks are going through a divorce; Spencer is humiliated by having to do something homoerotic in order to pledge his fraternity. These two lifelong buddies are the main planners of the book heist, though in the real-life segments the two dispute who was the ringleader. But the superb Peters is so overwhelming a presence that Warren’s complete control in never in doubt. As the plan gets more complicated, Chas and Eric become involved.

It’s odd that the real-life quartet never appears together in a single frame of “American Animals,” because this is clearly their redemption tour. How you feel about this film hinges solely on whether you think this redemption is warranted. I did not, so the only message I received from “American Animals” is that you can star in your own movie if you commit a violent robbery and are from “America’s Heartland.” Hell, you don’t even have to succeed at the crime!

The first ideas for this robbery come when Keoghan’s version of Spencer visits the Transylvania University library’s secured reading room. Anyone who makes an appointment can gaze and marvel at the numerous rare books contained within, books like Darwin’s “On the Origin of Species” and the library’s gigantic piece-de-resistance, several volumes of John James Audubon’s Birds of America. These priceless rarities are guarded by one person, librarian Betty Jane Gooch (Ann Dowd), who holds the keys to the display cases and drawers containing them. Audobon’s book, which Gooch tells Spencer is worth around $12 million, is the room’s centerpiece. It’s a gorgeously rendered piece of art showcased under the type of glass housing you’d see in a heist movie. Spencer thinks that if he watches enough videos of cinematic capers, he can pull off robbing Audobon’s book.

Speaking of heist movies, “American Animals” is packaged as genre kin to films like “Oceans 11” and “Rififi.” But what makes a heist movie fun is that its robbers are punching up, not down. There’s a Robin Hood mentality to most of them, with the mark being someone or something that either deserves it or can afford to do without whatever’s stolen. If that’s not the order of the day, these films at least give viewers anti-heroes who are doing the crime out of an understandable desperation. Even “Bonnie and Clyde,” despite all its murdered innocents, had as its central robbery target what was considered to be an enemy of the people.

By contrast, would you enjoy a movie where Warren Buffet robs a bodega—and kicks the bodega cat for good measure? Because that’s what “American Animals” feels like. Granted, Warren and his droogs are technically robbing a university, but we never hear them talk about that entity. Most of their planning deals with how to, in their words, “neutralize the librarian.” There are repeated arguments about this, with no one willing to get their hands dirty until Warren begrudgingly volunteers. Layton even gives us an imaginary re-enactment staged like a delicate dance number, with Dowd getting tazed in the neck and then flung out of the frame while the guys run away with the loot. Of course, it won’t be that easy, and the one guy who complains most vociferously about not wanting anything to do with harming Ms. Gooch will be the one to get his hands the dirtiest.

There are several false starts for the heist, with ample opportunity for these grown men to change their minds. But whenever someone balks, someone else will incredulously say “don’t you want to know what happens next?! You’ll regret this for the rest of your life if you don’t do it!” Between these scenes is a digression to Holland, the only enjoyable moment in the film, where Peters interacts with a shady fence played by the legendary Udo Kier. Kier is so intriguing in his brief appearance that I wanted to run off with him to whatever heist he might be doing.

Alas, the library robbery is the hand that I’d been dealt, and its execution is when “American Animals” becomes irredeemable. The scene is ugly and violent, with Dowd thrashing about after she’s been tazed and Peters alternately screaming at her to shut up and trying to comfort her as she’s ziptied, gagged and thrown around by his accomplice. Layton makes sure to give us a shot of Dowd wetting herself in fear, which is nowhere near as repugnant as what he does next. He cuts to the real perpetrators, all of whom look at the camera in what I assume is supposed to be remorse. Even in her moment of violation, Betty Jane Gooch isn’t given any agency.

The real Betty Jane Gooch does, however, get the last word in this movie, which in a way saves me from having to give it no stars. She is far less complimentary of the guys who assaulted her than the movie is. But it’s too little too late. Where was her onscreen commentary when she was having the crap beaten out of her?

When I read up on this story—because I believed this movie was pulling my leg at first—I found a Vanity Fair article that called the men who served seven years for this botched crime “good kids from good families.” Never mind that they weren’t kids, and the “good families” part indicated that they were not in life situations that would require them to turn criminal. But isn’t that what the news media always says when the criminals are White men? “Good kids from good families” vs. “thugs who had histories” when the shoe is on the darker foot. Inadvertently or not, “American Animals” feeds into this often poisonous narrative that offers benefit of doubt and a path to redemption no matter how heinous the crime, provided you’re the right gender and color.

A scroll at the end of the film tells us one of the guys has aspirations to work in movies. Well, congratulations, dude. Here you are. 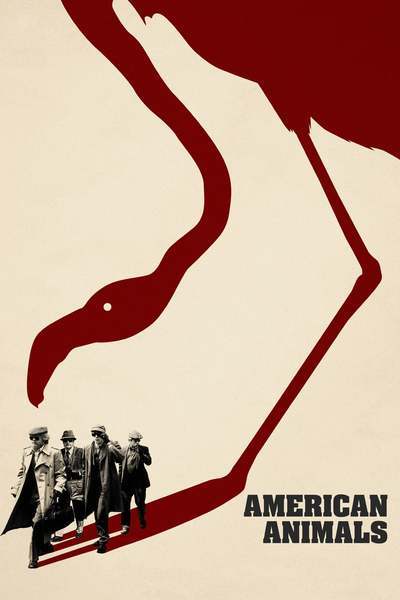 Rated R for language throughout, some drug use and brief crude/sexual material.