"Why is it so hard all the time?" Adam (Scott Evans) moans during "Almost Love," an ensemble romantic comedy/drama written and directed by Mike Doyle. It's difficult to see what is so hard, and granted I am writing this from isolation, worrying about my sick and/or at-risk friends and family, wishing I could go out to bars or eat finger food at parties. Perhaps it's unfair to drag in the current moment, but I can't help it. Life is not separate from art. The larger context does inform the artistic context. It's not the movie's fault, per se, although "Almost Love" has problems other than being jarringly out of date with How We Live Now.

Even without the current stress, what exactly is so hard in Adam's life? He's a painter and he makes his living painting (yes, he paints for a famous painter and doesn't get credit for his work, but still: nothing's stopping him from making his own work, except that he seems to feel that choosing to be an artist is going to be easy.) He's been dating Marklin (Augustus Prew) for five years. Marklin runs a fashion/lifestyle blog, was profiled by the New Yorker, is stopped on the street by gushing fans, and he supports Adam financially. While that brings its own kind of awkwardness, it's certainly not the same stress as, oh, the possibility of losing your home, of having no place to go at all.

Speaking of which, one of the running jokes in Almost Love is that Adam and Marklin's mutual friend Cammy  (Michelle Buteau) is dating a homeless guy. This is treated as so beyond the pale by everyone, including Cammy, that the guy's name isn't even mentioned. He's just "oh, the homeless guy you're dating"? And everyone laughs and Cammy cringes because she can't believe she's "dating a homeless guy." Do these people hear themselves? There are also snarky remarks about how awful Uber drivers are, and how irritating the ice cream truck is, with its incessant jingle. Now, New Yorkers do understand the irritation of having an ice cream truck jingling around their block, day and night, but when this crowd gets to know the ice cream truck owner (a hottie, of course), one of them expresses eye-rolling boredom about how all he talks about is ice cream, and all he wants to do is expand his business, and isn't it all just so boring? Like, stop talking about your job already, ice cream man. It must be nice to feel so financially secure that you turn your nose up at a guy doing his best to make a living in New York. These characters, holed up in their class, who probably consider themselves liberal and tolerant, are steeped in the cluelessness of economic privilege. And they don't even know it. And Mike Doyle doesn't appear to know it, either. There's no inquiry or interrogation into why Cammy's boyfriend might be homeless, and there's no awareness of how gross it is to think "a homeless person" is seen as absolutely "out of bounds" as relationship material. They're people, for God's sake.

The cast is made up of excellent actors, who do bring their characters to life. Patricia Clarkson has a very funny cameo, and there are a couple of jokes that really land. "He's eating dairy?" "Yes." "Poor thing." But in general the script has no subtext, and without subtext there's no room for real investment. Everyone says exactly what they feel in the moment they are feeling it. Adam and Marklin keep secrets from one another, but everyone is so communicative, so open, that subtext isn't given a chance to work its magic. Almost Love sometimes has the vibe of a situation comedy's pilot: establishing the cast of characters, their various "issues," like a thirtysomething "Friends." There's the wonderful Kate Walsh, who plays Elizabeth, still blissed out after 15 years of marriage, comfy and complacent (until ...) There's high-strung Haley (Zoe Chao), who gets a crush on the high school kid she's been tutoring. This sub-plot has very little to do with anything else. Adam and Marklin ride bikes, have enough free time to go out with friends constantly, consider buying an apartment together, and Adam is Mr. Sad Face all through it. He thought life would be better than this, easier than this. Better than what? Easier than what? Having a kind devoted boyfriend who supports you financially and is understanding for the most part about you being dissatisfied all the time?

Maybe it's not the movie's fault. Maybe it's just me. But when I hear a character, who does not have to worry about money, say that it's a "snoozefest" to hear about the ice cream truck guy's ambitions for himself, and the movie seems to agree with her, I'm done. I don't need to invest in these people. They're far too invested in themselves. 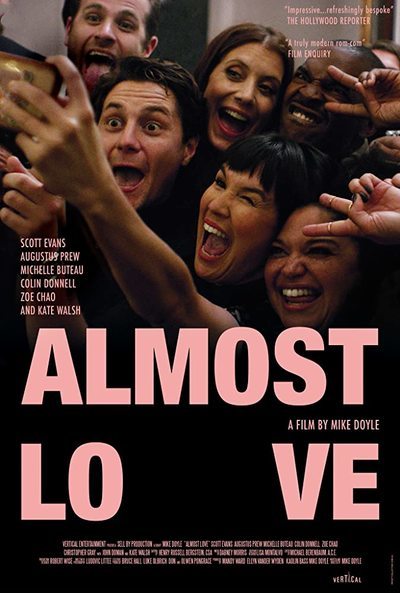