“There was a boy, a very strange enchanted boy…”

That was the tune that came to mind during the opening moments of “All the Wilderness,” which ultimately amounts to a visually ambitious tone poem about the none-too-surprising caprices of male adolescence.

A young teen boy is shown in a sunny overgrown garden as he studiously sketches a dead crow that’s lying prone on the ground. Lurking nearby is a ghostly scarecrow made out of white cloth.

Turns out, however, that James Charm is not so much enchanted as he is haunted. His father’s untimely demise, the cause of which we don’t learn until much (maybe too much) later, has left his child obsessed with death to a highly morbid degree. In fact, there probably hasn’t been a movie kid this fixated on the Grim Reaper’s handiwork since Bud Cort’s title kook in 1971’s “Harold and Maude.”

As played by Kodi Smit-McFee, who has apparently inherited Haley Joel Osment’s mantle as Hollywood’s spooked-out child actor of choice after his stints in the post-apocalyptic fable “The Road” and the vampire thriller “Let Me In,” James doesn’t so much see dead people than think he can predict when death will strike. He ends up with a shiner after handing a note to a bully that states the exact time and day he will expire. He also senses that his hamster is not long for this world and, it turns out, he is right.

James, who has been accepted at a school for gifted students, has exceedingly sophisticated taste in music (Chopin piano concertos on vinyl) and reading material (“Moby Dick” and Carl Sandberg’s poetry, especially the one aptly titled “Wilderness”). Something about him—along with the repeated image of a verdant canopy of majestic ferns, pines and trees that would do Terrence Malick proud—makes you believe he might be special. A gangly wilted plant that is surely destined to sprout into something better.

But instead of being the second coming of Edgar Allan Poe, James proves to be not much more than just another Holden Caulfield knockoff.

Still, for a while at least, Smit-McFee is gifted and vulnerable enough to convince us that there must be more going on with this moody social misfit than debut director/writer Michael Johnson’s slight screenplay is ever capable of conveying. But James is simply a lost boy hoping to be found and yearning for acceptance as he decides to escape from his suburban home to sample the urban wilderness of Portland, Oregon, which is portrayed as a nocturnal carnival awash with garishly murky green, red and blue hues.

He is dismissive and resentful of his single mother (Virginia Madsen, who invests more in her part than it deserves), especially when it seems she is interested in another man. He barely speaks to his therapist (Danny DeVito, memorable despite being in only two scenes) although he does connect with a fellow patient, an attractive if overly defensive girl (Isabelle Furman) who has a large turquoise ring, an elephant tattoo on her wrist, the phrase “Voo Doo” on her T-shirt and a job making artisanal doughnuts.

In other words, the kind of aloof artsy female that mostly exists only in movies.

They initially clash, which of course means there is an attraction between them. From there, James starts sneaking out at night to hang with Harmon (Evan Ross, singer Diana’s son and a real find), a budding musician with a Cheshire cat grin who lives in a gathering place for skateboarders and graffiti artists. Under Harmon’s influence, James indulges in drinking, pot, cigarettes and shoplifting. He also gets his heart broken. That sets us up for the film’s big revelation, which is only a surprise if you haven’t been paying attention to the multiple appearances of an overtly portentous bridge that pop up throughout the movie’s under-80-minute running time.

It is odd and disappointing how Johnson gets almost everything right but fails when it comes to the undernourished script. His cast is impressively overqualified and spot-on. The dream-like look to the film, thanks to cinematographer Adam Newport-Berra, is mesmerizing. The details of the premise are initially promising. The eclectic background music suggests intriguing possibilities are ahead. But he fails in the all-important storytelling department, since it eventually becomes clear that there is not that much story to tell.

And, at that point, “All the Wilderness” is lost in the narrative weeds. 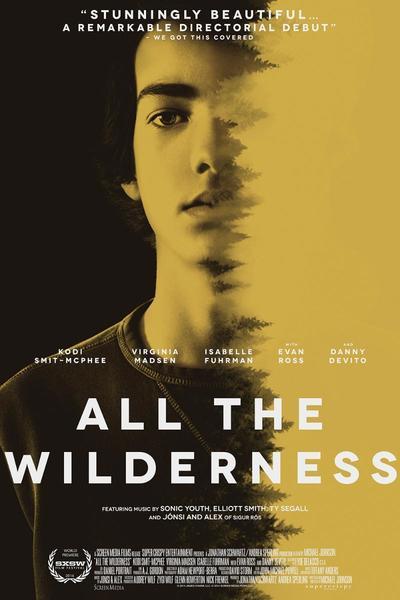