Janus Metz's “All the Old Knives” observes two former lovers who reunite after being separated for eight years and who, over the course of a long afternoon and evening in a fancy restaurant, reminisce about the time they spent together in Vienna. Lest you think the resulting film is going to be some kind of hybrid of “My Dinner with Andre” and “Before Sunrise,” it should be noted that the period of time under discussion occurred when both were working for the CIA, and there's the distinct probability one of them may have been a mole whose actions led to mass casualties. It's an intriguing idea for a film, I suppose, but it proves to be pretty much all setup with precious little follow-through. Not even the good performances from the two leads can make the whole thing work.

Eight years ago, a plane was hijacked in Vienna and the members of the CIA station there—including agents Henry Pelham (Chris Pine) and Celia Harrison (Thandiwe Newton) and superiors Vick Wallinger (Laurence Fishburne) and Bill Compton (Jonathan Pryce)—pursued any and all possible leads to try to figure out a way to defuse the situation before blood was shed. This failed and all 120 people on board, terrorists and hostages alike, were killed. Now, new information has come to light suggesting there was a mole in the office who may have secretly provided information to the terrorists. Henry is charged with interviewing the surviving members of the group—one mysteriously committed suicide a couple of months after the incident—to see if he can ferret out which one is guilty.

Which leads to the reunion in a fancy restaurant in Carmel-by-the-Sea between the former lovers. They have not seen each other since Celia took off in the wake of the tragedy, and after the requisite catching-up banter and perhaps a hint of low-grade flirting, their discussion turns to eight years earlier. The film then uses parallel timelines, cutting between the current conversation between Henry and Celia and extended flashbacks showing what they were doing during the crisis. It soon becomes clear at least one of them knows more about what happened than they are letting on, and that the sumptuous feast they have been consuming will most likely prove to be the last meal for at least one of them.

As espionage narratives go, “All the Old Knives,” which is based on the novel by Olen Steinhauer (who also wrote the screenplay), is closer to the more cerebral and realistic creations of John le Carré than the comic book fantasies of James Bond (underscored perhaps a bit too bluntly at one point where Henry attempts to order a vodka martini and is rebuffed). The early set-up scenes are reasonably intriguing but at a certain point, things just stop working. One key problem is that the flashback structure never quite works and ends up halting any dramatic tension practically every time it goes back and forth in time. Another is that the big center mystery proves to be not much of anything—at a certain point, it becomes fairly obvious what the answer is and when all is finally revealed, the revelation and subsequent explanation is somewhat of a letdown.

This makes “All the Old Knives” somewhat frustrating, especially when this meh material is delivered by a group of strong actors. Newton is, of course, one of today's more commanding performers, and she invests Celia with enough determination and vulnerability to make the character more complex than the material has managed. Likewise, Pine is good as Henry and, along with his recent turn in the otherwise disappointing “The Contractor,” demonstrates an unexpected sense of gravitas that suggests he has the soul of a character actor burning within him. And while their parts do not really add up to much in the long run, old pros Fishburne and Pryce help things out momentarily by the strength of their distinct presences alone.

“All the Old Knives” is never much more than a film whose narrative curlicues cannot quite disguise just how familiar it all is. With mid-sized movies aimed primarily at adult-leaning audiences becoming increasingly rare amidst the glut of franchise properties, I would have loved to have celebrate it as a throwback. Alas, it feels more like one whose ultimate destiny is to languish on Amazon for those who can’t find anything better to watch.

Now playing in theaters and available on Amazon. 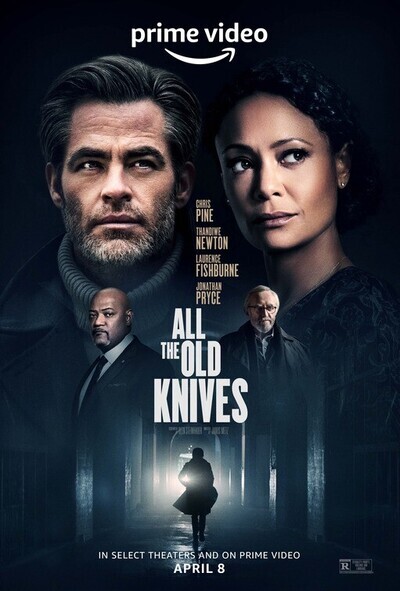