In a scene about half-way through "All About Nina," the feature film debut of writer-director Eva Vives, standup comedian Nina (Mary Elizabeth Winstead), wakes up after a night spent with a new man. The night went really, really well. This is new territory for Nina, who normally charges through life like a porcupine. She gets into the shower and promptly has a panic attack, curling up on the floor, heaving for breath, tears streaming down her face. This is when I knew "All About Nina" was up to something a little bit different. Vives (and Winstead) really understand this prickly armored woman, a woman who weeps with sadness after a great night, whose anger isn't obliterated magically by the possibility of joy. "All About Nina" understands that happiness can be extremely stressful. If you're unused to happiness, you don't know what to do with it. You may, in fact, deliberately torch it, just so you can get back to the misery that is familiar. Not too many films—really, not too many people—understand this dynamic.

Nina lives a chaotic mostly-nocturnal life. She works small comedy clubs, vomiting immediately after every show, fighting off sexual come-ons from male comics. She takes men home for anonymous drunken sex; these guys barely know what hit them. She drinks too much. She smokes in the shower. She has stilted dinners with her mother (a beautiful cameo by Camryn Manheim). Her married lover (Chace Crawford) is violent, but she keeps going back to him. Nina is, to put it mildly, a trainwreck. Her standup act is very angry and not particularly funny, but she is so cynical and frank about sex and bodily functions audiences find it cathartic. Her agent (Angelique Cabral) gets her an audition with "Comedy Prime" (clearly based on "Saturday Night Live"). To compensate for its reputation as a boys club, "Comedy Prime" has summoned many female comics to audition, in essence pitting the women against each other. Nina, dressed all in black, the picture of a grumpy New Yorker, flies out to Los Angeles for the audition. This is all established in the extremely busy first 10 minutes of "All About Nina." Once the film reaches Los Angeles, it hits a speed bump and finds its real stride.

Vives has a lot of fun with the New York-Los Angeles culture clash. Nina stays with a "spiritual author" named Lake (Kate del Castillo). What could be the cliched "sounding board" character is complex in del Castillo's hands. She greets the jetlagged Nina with a warm hug, her preferred pronouns, and the announcement, "I'm water-based." Nina snarks, "I'm whiskey-based." On Nina's first night there, Lake invites her to a gathering in the backyard, where the leader starts off with, "My name is Geronimo but you can call me Smoky." The look on Winstead's face is worth the price of admission. While waiting for word of an audition, Nina does some gigs at LA comedy clubs, where she meets Rafe (Common). Rafe is not a comic and at first Nina treats him with suspicion and hostility. Who is this earnest smiling guy asking her out to dinner? (Common has been choosing such interesting diverse projects. Here, he's a leading man, and he plays it simply and openly.) Both Rafe and Nina have some miles of rough road behind them. Nina has no idea what to do with a man who says, "Let's take things one step at a time." Normally she does the "picking up." She's never had a boyfriend.

Nina's cynicism isn't just protective armor. It's her modus operandi. She's self-destructive to the point that you wonder if she would mess up the job on "Comedy Prime," should she get hired. The observations about women in comedy are spot-on, and there are some really great scenes showing the bantering among female comics, doing gigs together, hoping for a call from the show. The dynamic among the women is friendly, but with sharp edges. It's a tough crowd. The utopia is that women should "support one another" but when 20 women are forced to fight for the same job—in a mainly-male field—supporting one another is easier said than done.

"All About Nina" has moments of stark tragedy alongside the vivid comedy, plus a third-act revelation of what has made Nina so angry. While the revelatory scene is a ferocious piece of acting from Winstead, the backstory is shoehorned in, because by that point you don't need anything specific to "explain" Nina's anger. This is a woman who has had to fight and claw for everything she's got. She's gifted with language, but "bad at life." Art is made up of people like this.

"All About Nina" worked on me by stealth. A couple of things don't work, and the story is a little bit top-heavy. The film is trying to do a lot, maybe too much. I enjoyed it, I admired the performances, I thought of all my women friends in comedy who have struggled to create a space for themselves in a boys-club realm. But I didn't get the full impact of "All About Nina" until the final credits rolled. I was still thinking about it 24 hours later. Perhaps a personal response is the hardest to express. I think what I admired most is how unafraid "All About Nina" was of being "dark." Because to many of us "dark" isn't really "dark" at all, it's just the norm. "All About Nina" digs into this, lives there.

Winstead does not hold back in portraying Nina's more unsympathetic characteristics, her harshness, her horrible choices, her refusal to be vulnerable. Winstead does not keep one eye on us in the audience, hoping we will find her character "sympathetic." She is beyond those concerns as an actress. She goes where Nina goes. This is a major performance.

It's common to want stories of unhappy people to end in redemption, or to dovetail into an "empowerment" narrative. "All About Nina" is "empowering," I guess, but it's something much better than that. It's true. It's messy and raw and true. 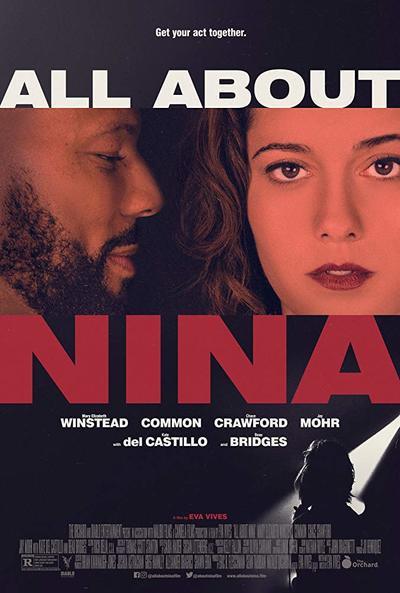 Rated R for strong sexual content and language throughout, some nudity and brief drug use.