If you enjoyed Netflix original movies such as “The Kissing Booth,” “Dude,” and “Candy Jar,” you’re more than prepared to like “Alex Strangelove.”

But if you don’t have nostalgia from a few weeks ago for those titles, you’re probably not a teenager, and you may not have been noticing how Netflix has been trying to become the 2018 version of John Hughes. “Alex Strangelove,” released this weekend, continues the streaming service’s fondness for teen stories that are themselves kind of rebellious, kind of charming and certainly innocent in their idea of romance. And even just a month after the success of “The Kissing Booth” in particular, here’s another story about main characters figuring out their sexuality, based on the arc of a life-long friendship, all told with the strong air of a Hughes tale.

Written and directed by Craig Johnson, “Alex Strangelove” is about a young man in high school named Alex Truelove (Daniel Doheny) who is gearing up to lose his virginity to Claire (Madeline Weinstein), his long-time friend and now girlfriend. Well, he thinks he wants to, because he know he should, and having sex only makes sense, right? But something is inhibiting him from really wanting to take the plunge, and it becomes clear that it’s more than just the usual virginal nerves.

That something is further challenged when he meets a similar-aged young man named Elliott (Antonio Marziale) at a party, who is openly gay and senses with a knowing glance what that something within Alex might be. Elliott also understands, having been kicked out of his father's house for being gay, as to why Alex might be holding back. They start a bit of a friendship, going to a concert and walking around New York City together at night, and the movie overall telegraphs their relationship. They click in a way that Alex is (in our eyes) believably either unaware of or denying, and we feel the pain of every time he tries to deflect his clear curiosity in Elliott.

“Alex Strangelove” is a movie about simply waiting for a few shoes to drop, so it works best as a poppy character study. And in spite of the story’s low stakes with Alex's two relationships, the performances are stable. Doheny is able to capture that awkward performative quality of being a teenager, especially facing something as otherworldly as sex. He’s just given bad jokes, like when trying to imagine how a macho heterosexual man might present himself, which makes for cheesy, clumsy dirty talk when trying to woo Claire in and out of bed. Doheny keeps the character grounded, as frantic as he can be, so that dramatic scenes with Weinstein, and Marziale (who aren't given enough time to be more than love interests) run smoothly. The movie doesn’t have enough tension despite Alex's inner debate, but it does have chemistry on-hand when the script wants to explore love in different ways.

Johnson wrote and directed the movie, which is a bit odd given its workman quality when compared to his past projects like “Wilson” or “The Skeleton Twins.” Especially on the turf of Netflix teen comedies, which try to indulge young viewers with elaborate-looking house parties or school events, zippy text graphics and easy-to-follow voiceovers, “Alex Strangelove” is standard stuff. It’s best as an honest, progressive idea of a high school in 2018, where gender identity is on everyone’s minds, kids do drugs to sitcom-like slapstick, and sexuality is a big part of everyone’s lives. Johnson's film does feel too broad, especially with some of its images that seem like easy stereotypes (a drama kid party is of particular question), and it is too neat with complicated feelings. But as a modern coming-of-age movie, one that's especially meant to keep the progressive values of teen Netflix on the home page for another week or so, it does have a fair amount of charm. 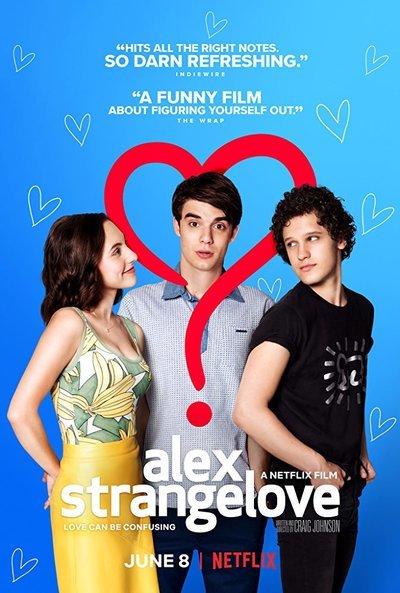