There’s a calculated risk in giving a film such as this a title with the word “agent” in it, lest some waggish critic take it as a cue to suggest that the onscreen talent change their own personal representation. See what I did there? Hoo boy.

Written and directed by Grant S. Johnson, “Agent Game” begins with a shot of an aging man sitting on a bench on a curiously empty street. Why, it’s Mel Gibson! Soon, he observes something, gets up from the bench, removes a gun from under his jacket, and starts shooting as a mournful cello plays. After which Gibson barks into his mobile phone “We have a problem.” We sure do: There’s a crazy old guy on an empty street shooting at nothing.

At the end of the movie we do see what Gibson’s character, a shady intelligence bigwig, is so agitated about, but for Johnson to hide it the way he does doesn’t speak to a desire to uncoil a complex plot so much as it does to the movie’s budgetary constraints.

The movie cuts away to Antwerp, Belgium, where we know all the spy action is, and gives a temporal marker. For the rest of the picture the viewer is unmoored, at least as far as titles indicating wheres and whens are concerned. Instead, “Agent Game” juggles three different timelines of a single story, which would be an intriguing and engaging approach ... if the story had any genuine interest to begin with.

“Agent Game” declines to specify which part of the U.S. intelligence alphabet soup it’s dealing with—that, one supposes, is part of its tiresome “point”—but here’s a linear rundown of the basics: In a “black site” agents played by Jason Isaacs, Dermot Mulroney, and Annie Ilonzeh have an émigré played by Barkhad Abdi hanging from a hook. Between this and “Good Time” you’d think that Hollywood was getting some kind of revenge on the actor for that “I am the captain now” proclamation in “Captain Phillips.” Anyway, the agents suspect him of terrorism, or are they only just playing possum? Things end poorly for the guy, and Johnson, in a really contrived and feeble attempt at self-insulation, has the most egregious violence against him committed by the character played by Ilonzeh, who is a person of color. The agent played by Mulroney takes it on the lam.

Subsequently, although in the film the action is depicted earlier; this is the Antwerp part—a team of mismatched agents played by Adam Canto, Katie Cassidy, and Rhys Coiro (this heroic trio won’t cost Johnnie To any sleep, I tell ya) “extracts” a target, and brings him, hooded, to a private plane. Once on the plane, the agents start getting unauthorized messages on their phones. Yikes!

This is intercut with scenes of Gibson in Washington, D.C., conducting, well, job interviews. Turns out he’s the guy who put the all-star team of Canto, Cassidy, and Coiro together, and placed Ilonzeh’s character in charge of them.

In case you are wondering, the hood comes off the guy on the plane at a certain point, and if you’re surprised by who is under it, I feel kind of bad for you.

Looking as if it was often shot in complete darkness or something like it, “Agent Game” is murky nonsense that aspires to get by on what it considers to be a trenchant cynicism about geopolitical chess. 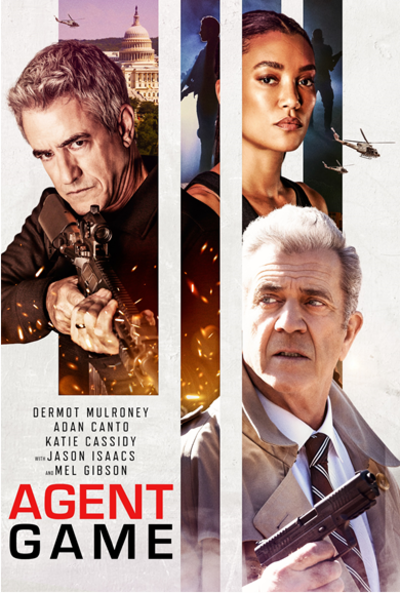