I've been trying to mind-control myself into the head of a kid the right age to enjoy "Agent Cody Banks 2: Destination London," but either I was never that age, or I haven't reached it yet. I'm capable of enjoying the "Spy Kids" movies, so I know I'm not totally lacking in range, but this movie seems pre-assembled, like those kits where it takes more time to open the box than build the airplane.

The movie opens at a secret summer camp where the CIA trains teenagers to become junior James Bonds. The opening scene, in fact, is uncanny in the way it resembles the prologue of David Mamet's "Spartan." In both movies, characters in combat uniform with lots of camouflage paint on their faces creep through trees and try to cream one another. For Mamet, that is not the high point of his movie.

Cody Banks (Frankie Muniz) is a smart, resourceful kid who thinks there may be something fishy at the camp, which is run by Diaz (Keith Allen), love child of Patton and Rambo. After a secret plot is revealed, Cody finds himself on assignment in London, where his handler is Derek (Anthony Anderson) and his mission is to prevent the CIA's bad apples from gaining possession of a mind control device which fits inside a tooth and turns its wearer into a zombie.

It's a pretty nifty device: At one point, its mad inventor fits it to a dog, which then sits upright at a piano and plays a little tune, reminding me inevitably of Dr. Johnson's observation that when a dog sits on its hind legs, "it is not done well, but one is surprised to find it done at all." The dog is impressive but no pianist, and Derek, watching the demonstration on a spycam with Cody, decides he won't buy the CD.

The agency as in the previous film supplies Cody with various secret weapons, including a pack of Mentos which explode when moistened. Turns out the evil master plan is to subvert a conference of world leaders at Buckingham Palace; to infiltrate the palace, Cody must join a world-class youth orchestra -- not easy, since he doesn't play an instrument, but easier than you might think, since his agency-supplied clarinet plays itself. It only seems to know "Flight of the Bumblebee," unfortunately.

Hilary Duff, who played Cody's sidekick in the previous movie, is MIA this time, and her place is taken, sort of, by Emily (Hannah Spearritt), a British agent who looks in a certain light as if she might be a teenager, and in another as if she might be, oh, exactly 23. You will recall from the previous film that Cody is too busy being an agent to date much, and his little brother sees more action. (That produced a good exchange: Cody says most of the brother's dating doesn't count because it's limited to a tree house, and the brother replies, "It does if you're playing Doctor.")

The big climax at Buckingham Palace features look-alikes for Tony Blair and the Queen, and a scene that is supposed to be funny because the youth orchestra stalls for time by improvising a song with a funky rhythm and the Queen boogies with the heads of state. Since I am enough of a realist to believe that a large part of the target audience for this movie doesn't know who the Queen is or what she looks like, it's a good thing the action starts up again real soon.

There is a Mind-Controlled food fight that begins promisingly but is awkwardly handled, and a chase through London that is (sigh) just one more chase through London, and apart from funny supporting work by the inventor of the Mind Control and the guy in the "Q" role, the movie is pretty routine. I wanted to be able to tell you the names of the actors in those two entertaining roles, but half an hour's research has not discovered them, although the movie's Web site has signed me up for junior agent training. 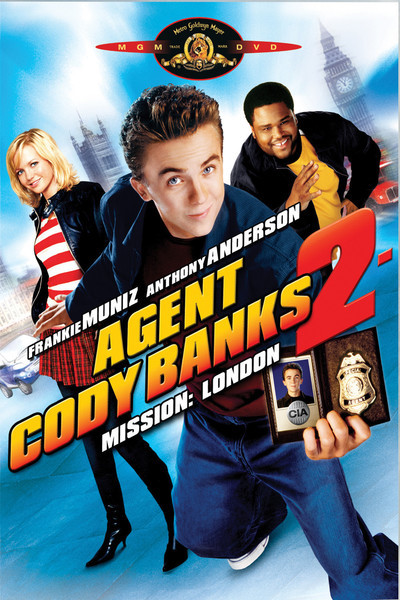 Rated PG for action violence and some crude humor