Heaven can wait for Victoria Justice in “Afterlife of the Party,” a shrill and derivative Netflix comedy.

The former Nickelodeon star brings all the incessant perkiness of her sit-com roots to the role of Cassie, a stunning and self-centered party girl who dies in a freak accident the morning after her 25th birthday extravaganza. Instead of going to heaven or hell, she finds herself in The In-Between, a tastefully decorated purgatory. But while the film from journeyman director Stephen Herek (“Bill & Ted’s Excellent Adventure,” “Mr. Holland’s Opus,” “Rock Star”) and writer Carrie Freedle strives for both wild, physical humor and heart-tugging poignancy, it achieves neither, occupying an uncomfortable middle ground of its own.

Justice’s Cassie is super high-energy from the start in the kind of trying-on-clothes montage that only exists in the movies. Dancing around the living room in a pink tulle skirt and rhinestone choker, she declares to her roommate and lifelong best friend, Lisa (Midori Francis), “I have to ring in 25 with style!” But one gets the sense that vapid Cassie has rung in the previous years with such style, as well, and the comparative quiet of the introverted Lisa makes you wonder how they’ve stayed so close for so long. “I’m really focused on work right now and I can’t have any distractions,” the young archaeologist insists, explaining that she’s studying dinosaur marsupial teeth, a detail that’s too complicated for the flighty Cassie to comprehend.

A blow-up during their big night out exposes the rift between the besties, as Cassie downs shots on top of the bar and Lisa feels left out. “You know that these people are terrible, right?” Lisa says of Cassie’s new friends. “You’re different when you’re with them.” She’s got a point—and Francis’ authenticity and soulfulness make you wish she were at the center of the film instead of on the sidelines.

Still, Cassie will be forced into introspection when she wakes up a year later to her wisecracking guardian angel, Val (a dryly amusing Robyn Scott), informing her that she’s dead, and she only has a handful of days to right her wrongs on Earth in order to secure a spot in The Above. Specifically, she must make amends with her estranged, yoga-instructor father (Adam Garcia) and the mother who took off to explore the world when she was a child (Gloria Garcia). And of course, she must fix her friendship with Lisa, which includes helping her hook up with their cute and equally shy next-door neighbor (Timothy Renouf, in charmingly flummoxed Hugh Grant mode). Cassie’s favorite part of this process is her ability to pick whatever she wants to wear each day, and although the visual effects here are a tad cheesy, it’s a testament to her eventual evolution that she goes from initially choosing a silver micro-mini dress that looks like a disco ball to soft, pastel florals that suggest she’s gained some substance.

The notion of having a second chance to say what’s in your heart to those who mean the most is timeless and irresistible as cinematic fodder, from “It’s a Wonderful Life” to “Heaven Can Wait” (and the Chris Rock remake “Down to Earth”) to “Ghost” to TV’s “The Good Place.” It’s pretty reliable territory that “Afterlife of the Party” is treading, and yet it still fails to resonate emotionally. The moments of truth Cassie shares with the loved ones on her list are superficial and rushed—especially the one with her mother, against whom she’s held the deepest grudge. It’s full of awkward smiles and jumpy pacing, as if everyone is in a hurry to wrap up and go home. The eventual reconciliation between her divorced parents similarly feels perfunctory and lacks the punch it seeks.

Meanwhile, the crucial role of a bland pop star named Koop (singer-songwriter Spencer Sutherland) is especially forced and highlights the glossy nature of the entire endeavor. Justice may have a striking screen presence, but she can only do much with material that’s less than heavenly. 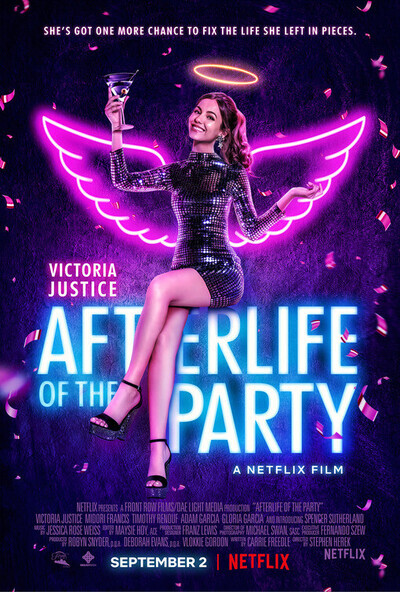