Before directing his first film, “After the Fall,” Saar Klein edited Terrence Malick’s “The Thin Red Line” and “The New World.” As such, one wouldn’t be surprised to discover a few Malick-like touches in Klein’s debut film. Klein sprinkles approximations of the master director throughout “After the Fall,” but these attempts never spring organically from the material. The occasional narration and the long, swirly glimpses at nature are instead hammered into a substandard “crime drama” that reeks of the Idiot Plot Syndrome.

As in Malick’s work, water is a common visual motif in “After the Fall,” except here it is represented by that symbol of suburban privilege, the swimming pool. Ben Scanlon (Wes Bentley) installed the pool in the hopes it would raise the property values on the New Mexico home he shares with his wife, Susan (Vinessa Shaw) and kids. The camera imbues the pool with all manner of symbolism, first by the dreamy shots of Ben and his kids’ naked limbs flailing about underwater, then later in a sequence where Ben attempts to chlorine himself to death. The home improvement loan Ben took out for this watery deathtrap drives the plot toward crime and attempted suicide.

Every morning, Ben fakes going to an insurance adjuster job from which he has been fired. He is never seen actively looking for a job, nor does it once cross his mind that his ruse will be discovered. Instead, he researches closed cases in the hopes that his employer will rehire him. “You don’t even work here anymore!” Ben’s boss tells him after Ben shows up with useless new facts about a case. After convincingly begging for his job, Ben is shown the door.

Ben lost his job because he thought everyone he investigated was honest, a plot point that could have yielded satisfying results had it been explored. “After the Fall” attempts to present Ben as a bastion of self-righteous honesty, but remember, he’s been lying to his wife since the opening credits. Had he simply told the truth and either asked Susan to try a temporarily return to the workforce, or borrowed money from his snooty father in law, this movie would be over in 15 minutes. Instead, Ben has a Meet Cute with robbery, and it sends him down a suspense-deprived path of criminality.

Ben gets the idea that he can support his family illegally when he walks in on a real estate agent’s illicit tryst in the house she’s showing. The realtor and her kept man immediately hand over their wallets (it helps that Ben has a gun for reasons too dopey to explain here) and a light bulb goes off over Ben’s head. Soon, Ben is robbing convenience stores, gas stations and the car pound where the repo man took his car. Susan is none the wiser, despite the fact that these petty larcenies barely support the lifestyle to which the Scanlons have become accustomed.

Ben is an incredibly inept thief. On his face he wears the sheerest stocking this side of a high priced escort’s legs, making him immediately recognizable through the nylon. He hits places he’s been to before AND he walks in front of mirrors and cameras before he puts on his panty hose. His ineptitude is ignored by Klein’s script, which not only lets him get away with the crimes but also provides him with a deus ex machina named Frank (Jason Isaacs), a cop who ensures Ben is never prosecuted despite being recognized.

Isaacs’ 5-o’clock shadow-wearing character feels ported from another, more grizzled movie. He slams boilermakers while sitting alone at the local bowling alley. He approaches strange men and asks if they’d like free beer. Frank has his own barely addressed side story before he meets Ben; we see him sending a birthday card to his estranged son before he breaks up a drunken bowling altercation amongst Ben’s friends.

Eventually, Frank tells Ben that he and Ben’s dirty cop of a Dad worked together at the precinct. “I knew who you were when I first saw you,” he tells Ben, a miscellaneous detail thrown in to explain why Frank would befriend him in the first place.

There’s a rather disturbing sense of privilege in “After the Fall.” It can’t help but justify Ben’s actions by stacking the deck against the victims. The places he robs are staffed by people far poorer than Ben, and several of these employees are shown in a negative light pre-robbery. It’s as if Ben deserves the right to terrorize these people rather than find a job or be truthful to his spouse. His crimes are eventually pawned off on the wrong guy, and “After the Fall” is too cowardly to fully consider the repercussions of sending someone to jail for crimes they did not commit. The sole nod to this travesty of justice is an “ambiguous” ending that is not as ambiguous as the filmmakers think.

Since we know “After the Fall” will never let its anti-hero get in trouble, there is absolutely no suspense during the robberies nor at home. When Susan finds out Ben has been fired, he does some kind of Jedi mind trick to get her to believe him instead of his employer. And when she finds Ben’s gun and stolen loot, she leaves with the kids but then inexplicably returns without question. She’s practically a Stepford Wife.

Klein goes berserk with the nods to Malick. Anyone who’s ever complained about Malick’s narration (and I’ve done so for “The Thin Red Line”, so I’m guilty) will think again after hearing some of this junk. The closing credits of “After the Fall” feature a thank you credit for Terrence Malick. It should have been an apology. 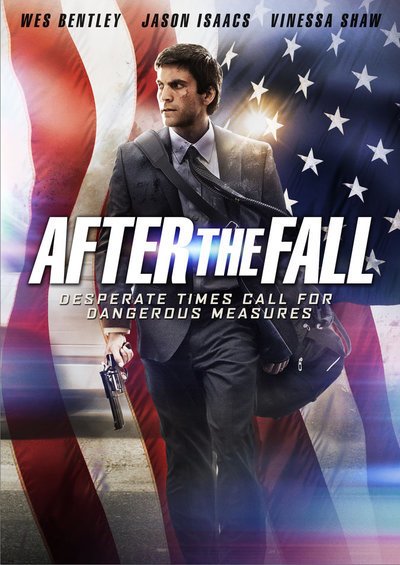