The characters in “After Love” spend a lot of time looking into mirrors. Mary (Joanna Scanlan), an English woman who became a devout convert to Islam when she married her husband Ahmed, discovers days after his death that he was living a double life with another woman. In a mirror, she practices what she wants to say to that woman. Later, she sees the woman, slim, blonde, and sophisticated, wearing jeans in contrast to the traditional coverings of Mary’s faith. Again, looking into a mirror, she gazes at her exposed body, running her hands over her skin.

There are metaphorical mirrored reflections as well. It is the story of two women looking at each other, first to see what makes them different, then to see what connects them.

Ahmed captained a ferry that crossed the water separating England from France, what the British call the English Channel, and the French call La Manche. In the days after his death, Mary replays a loving voicemail he left her, affectionately chiding her not to get too close to the edge of the White Cliffs of Dover when she goes to wave at his ferry boat. She believed the man she had been with since they were teenagers was as devoted to her as he was to him. But she discovered another woman in his life, Genevieve (Nathalie Richard), from the French side of the water.

And so Mary, who has spent so much time gazing across the Channel, crosses it to confront the other woman. She looks into a mirror to practice what she will say. But when the time comes, standing at the doorway, as Genevieve approaches, she cannot find her voice. Instead, Genevieve, a sophisticated, confident woman, sees a lower-class English woman with a head covering and assumes she must be a cleaning lady. She tells Mary to do the laundry, and a few minutes later, Mary buries her nose in one of Ahmed’s shirts.

Genevieve needs help packing up for a move to a new house. Mary comes back every day to help and learn more about her husband’s other life and the woman who is so different and yet with whom she shared so much. Mary and Ahmed were together since their early teens. They were married. She was close to his family. Genevieve and Ahmed were not married. She never met his family. But she is the mother of his son, Solomon (Talid Ariss). Mary’s resentment of her rival melts away when she has a chance to glimpse Ahmed in the boy who blames his mother for his father’s absence.

Writer/director Aleem Khan has a gift for telling visual details, some of them imaginary manifestations of emotions: The majestic cliffs over the water seem to tremble; a crack splits a bedroom ceiling. And some, within the world of the film, are real. A stoic widow, all but her face covered in spotless white, is surrounded by weeping women in black waiting for the men to return from the burial. Kahn keeps the parallels understated but meaningful. Each woman cannot resist lying down on the other’s bed.

The contrasts loom large at first, the subdued Mary completely immersed in her adopted religion and culture while Genevieve is cosmopolitan and independent. Solomon at first overlooks Mary but then allows himself to be comforted by her. Mary, at first too overwhelmed to speak, finds a way to communicate with her husband’s son, which leads to a painful revelation. Later, another painful secret is revealed more quietly.

“After Love” is not an accurate description. Love does not end in this story any more than the anguish of loss. Instead, it is about characters who find that a broken heart is open to empathy and learn to recognize that what connects us is so much more than what divides us. 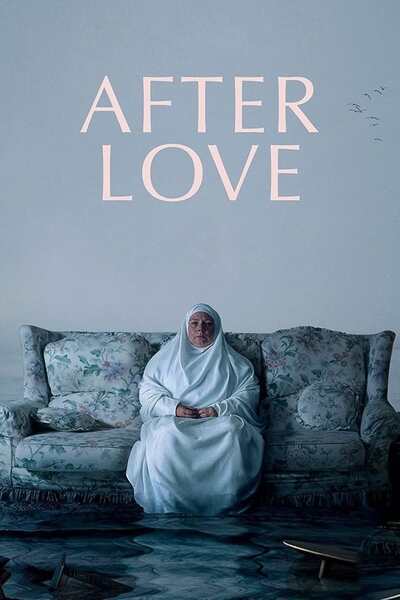