"Africa Addio" is a brutal, dishonest, racist film. It slanders a continent and at the same time diminishes the human spirit. And it does so to entertain us.

It claims to be a documentary of what has happened in Africa since colonialism ended. It shows us sadism and tells us we must not fear to see the truth -- but the sadism itself has been staged for the cameras. It weeps for the slaughtered wild game of Africa -- but who weeps for the game tortured before the cameras, and before our eyes?

The film begins with a scene familiar from a dozen newsreels: A British colonial governor boards a launch and is taken to an offshore ship. The Union Jack comes down, and a new flag is flown. Another colony is independent.

But independence has come too soon, the narrator tells us. Africans are not ready for self-government. "Europe has abandoned her baby," the narrator mourns, "just when it needs her the most." Who has taken over, now that the colonialists have left? The advertising spells it out for us: "Raw, wild, brutal, modern-day savages!"

I could hardly believe my ears. During a year in South Africa I only rarely heard such language, and then usually in bars. Yet here it was being presented as gospel truth in a supposedly reputable documentary.

One would not, of course, object to a dispassionate study of Africa's setbacks since independence. But one would expect an examination of its progress, as well. No hint of anything but disaster, however, is given in this film by the makers of "Mondo Cane." As in their earlier "documentaries," Jacopetti and Prosperi have combined a saccharine sound track, arty photography and an authoritative-sounding narration to lend respectability to a film offering perversion and brutality as its fare.

One dubious scene shows white Boers purportedly leaving Kenya in cattle-drawn wagons for the long trek back to the Cape. "A freedom march in reverse," the narrator explains. "These Boers settled Kenya generations ago, but have been driven from their own country."

In fact, cattle-drawn wagons are no longer in general use in Africa, as Jacopetti and Prosperi undoubtedly knew. Real Boers (there are a few among the mostly British white population in Kenya) would probably call up a moving van for their furniture and then fly down to the Cape.

Other scenes are equally preposterous. We are told that Africans, lacking modern weapons, surround an area the size of Rhode Island, 10,000 strong, and close in on the trapped game, Ha! We are told that the Zambesi River was plundered of thousands of hippos in 1963, to provide cheap food. In fact, the Zambesi was in white hands in 1963, and essentially still is. Nor does Rhodesia or Zambia consume a lot of hippo meat. None, in fact.

Another suspicious scene shows "poachers" torturing an elephant to death. The early footage is shot at ground level. After we have seen enough suffering, the camera goes aloft and we are told it's in a helicopter flown by game wardens. In fact, it's the same helicopter used throughout the film. Was the scene staged, or did real poachers conveniently agree to star? It seems pretty clear that the elephant died for our entertainment. Later, we learn that it was pregnant.

There are scenes even more odious, of executions, decomposed bodies, burning flesh, suffering and death. If only they were honestly presented, set in context, perhaps they could be justified. But they are not. Instead, they are staged for our amusement, cloaked in the respectability of an "impartial" documentary, and in the end that is the most disgusting thing about this wretched film. 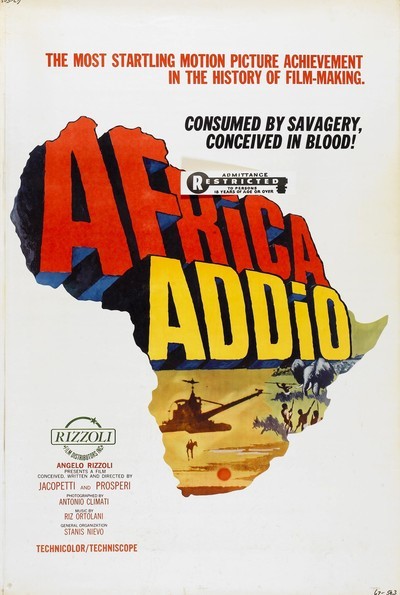