When Russell Millings (Ethan Hawke) emerges from prison, he is a cringing and almost totally institutionalized person, authority-identified to his bone marrow, fearful of doing or saying the wrong thing. He cringes when spoken to. He shuffles rather than walks. He stays in a crappy motel and gets a job as a dishwasher, interacting with his boss like she's a prison guard, submissive and terrified. Then, one windy night (the "pathetic fallacy" is strong), when taking the trash out, he discovers a screaming baby girl in the dumpster. There is a note underneath her: "Her name is Ella." All of this occurs in the first 15/20 minutes of "Adopt a Highway," a debut feature written and directed by Logan Marshall-Green.

"Adopt a Highway" opens with a cacophony of voices, President Bill Clinton saying we must be "tough on crime," speechifying about the "three strikes law" and mandatory sentencing for drug-related crimes. The so-called War on Drugs was a disaster, resulting in extremely long sentences for minor offenses. People are still in jail for basically being addicts, or even just adjacent to addicts. ("The Sentence," a documentary about one family's attempt to get their family member out of prison, is really about the insanity of mandatory sentences.) Many states have overturned laws like the "three strikes law", but that's cold comfort for someone like Russell, who got 25 years for having an ounce of pot on him. He emerges into a totally changed world. He has never been on the internet. He doesn't know what Google is. His parents both died while he was in prison. He blinks into the sunlight like he's a mole emerging from underground.

Finding Ella is the turning point in this gentle story, and it's a pretty top-heavy plot maneuver, out of a very different kind of movie. Russell does not call the police. He takes Ella "home" with him and tries to take care of her. She's been abandoned, her future wiped out by what was done to her. It's not hard to see the connections Russell may feel. Russell, a child-man, who won awards as a teenager for his participation in an "Adopt a Highway" campaign, also has no past and a limited future. The scenes with Ella have a real intimacy, and even charm, but it's a swerve from the haunting opening sequences, where Russell walks around, squinting at a world that seems so big, a world he no longer recognizes. He rides a roller coaster, just for the hell of it, agog at the blinking lights, at the sheer heady freedom of it.

There are a couple of other incidents along the way, things that happen to Russell, but "Adopt a Highway" never coalesces into a whole. It jump-starts itself from "bit" to "bit", more like an old television episodic. Holding it all together is Hawke's performance, weighted down with the heaviness of injustice, a shyness about authority figures in general, a passivity which makes people look twice at him and then back away. His hair is stringy, his salt-and-pepper beard thick, and pain and confusion practically shimmer around him like a migraine aura. There's a really fun sequence in an internet cafe, where a helpful employee shows Russell what email is, and then asks to take a picture with him, this rare creature who has never been on the internet before. These sequences are sensitive and observant.

Logan Marshall-Green, known mostly as an actor (he was a regular on "24," "The O.C.," "Damnation") has put together a good team. Jason Isbell's score is a huge contribution, merging the disparate episodes into an emotional through line and Pepe Avila del Pino's cinematography makes things like morning sunlight, or twinkling carnival lights, or wide desert spaces look as magical, as strange, as daunting, as they must look to Russell.

Hawke (who also co-produced) moves and speaks like he's underwater; for this damaged brutalized man it's a struggle even to make eye contact. Ethan Hawke works deep. You can see how deep he goes. His interactions with an employee from CPS (Betty Gabriel, so unforgettable in "Get Out"), or with his parole officer or anyone "in charge" is—in its own understated way—an indictment of long incarceration for non-violent offenders. "Adopt a Highway" isn't about that (at least not in terms of it being a "message" film), but the look of buried terror and resentment in Hawke's eyes tells the deeper story. Still, "Adopt a Highway" wanders ("Ella" is just the first chapter) and the redemption narrative isn't so much heavy-handed as it is super-imposed. 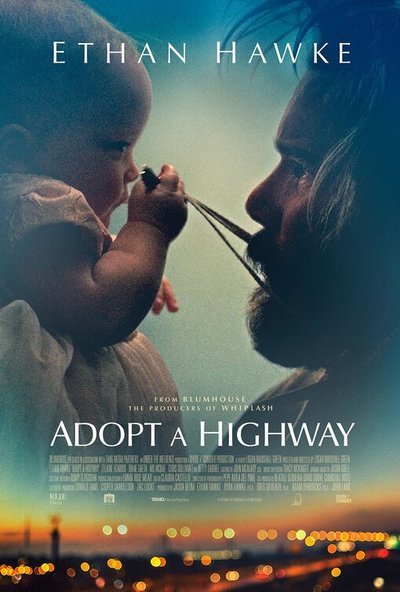