“The enemy is dead,” proclaimed Russian politician Oleg Morozov upon learning the news of Senator John McCain’s death last Saturday. The war hero-turned-presidential candidate had always been fearless in his vocal mistrust of Vladimir Putin, and there’s a priceless scene in Jack Bryan’s new documentary, “Active Measures,” where McCain is seen smirking through a speech delivered by the Russian president, as he sneers with theatrical menace in the senator’s direction. It’s no surprise that Donald Trump shares Putin’s disdain of McCain, having famously belittled the five-and-a-half years that the Vietnam veteran endured as a prisoner of war by smugly quipping, “I like people that weren’t captured.” No wonder it took Trump so long to approve the lowering of the White House flag in honor of McCain’s passing.

If any single moment defined the late politician’s legacy for me, it would be when he corrected a woman while on the 2008 campaign trail, after she made a racist statement about his opponent, Barack Obama. Rather than exploit his supporter’s ignorant belief that Obama was a deceitful “Arab,” McCain took back the mic and said, “No ma’am, he’s a decent family man and citizen who I just happen to have disagreements with on fundamental issues.” This act of “taking back the mic” from those wishing to amplify division and misinformation starkly contrasts with the daily onslaught of xenophobic hysteria spread by our oligarch-in-chief.

McCain is among the most poignant and enlightening interview subjects in Bryan’s film, which builds a meticulous and convincing argument for how Russia went about hacking America’s 2016 presidential election. It chillingly illustrates the decline not only of democracy but of moral leadership in our country, while spending its first half detailing how Russian security services created similar upheaval in other nations, relying on three key weapons of political warfare: propaganda, cyber attacks and recruiting agents of influence. Former Georgian president Mikheil Saakashvili recalls how Russia invaded his country during the opening ceremony of the 2008 Beijing Olympics, alleging it as a method to retaliate against his country’s favoring of democracy. He later lost reelection in part due to the release of prison abuse footage later branded by the government as staged.

Though Bryan and co-writer Marley Clements don’t delve into the complexities of the Russo-Georgian War, nor mention the multiple criminal charges Saakashvili’s currently facing, he nevertheless emerges as a cautionary figure in how his progressive views led him to become a target of the Kremlin. The fragility of any democratic system is exposed once public opinion is turned against it, courtesy of falsified information transmitted by foreign trolls masquerading as local voices to gullible voters. “It’s not about the size of their economy or their military,” Saakashvili notes. “It’s about their state of mind.”

Considering “Active Measures” is arriving in theaters and on digital platforms just over two months prior to the November 6th midterms, its timing couldn’t be more impeccable. What frequently works against it, however, is the uninspired nature of its style. The editing by Andrew Napier, director of the Young Turks documentary, “Mad as Hell,” is designed to overwhelm, and does too good a job of it, presenting names and statistics at such a rapid-fire pace that I frequently felt compelled to freeze various frames, which I thankfully had the luxury to do with my online screener. I suspect audiences who view the film on the big screen rather than stream it at home will leave the theater feeling more exhausted than outraged, since Bryan rarely allows us a moment to breathe.

Perhaps the only notable exception occurs when Michael McFaul, former U.S. ambassador to Russia, pauses dramatically before explaining how Trump has enabled Russian money-laundering in America throughout his career. The film itself admits toward the end that each of its story threads could’ve easily served as its own standalone narrative, and that is part of the problem. Bryan is so determined to fit in every last thread of evidence while keeping the running time under two hours that the picture plays more like the cinematic SparkNotes of a multi-part miniseries. Oftentimes, the film is cut and scored like a feature-length political ad, with a large chunk of its running time focusing on highlighted passages of fragmented, all caps text. Doron Danoff and John MacCallum’s music is so irritatingly pedestrian, it sounds like a temp score soon to be replaced by Philip Glass. And yet, despite these missteps, the film holds together.

Winner of the Best Documentary prize at this year’s Karlovy Vary International Film Festival was Vitaly Mansky’s “Putin’s Witnesses,” a galvanizing picture comprised of footage originally shot by the director for the purposes of Putin’s electioneering in 1999. The persuasive genius of Putin’s public persona could be detected in his cool-headed, even genial demeanor, as he willingly engaged in Mansky’s spirited debates. Though retiring Russian president Boris Yeltsin mistakenly believed that his successor would fight against totalitarianism while ensuring the freedom of the press, it wasn’t long before Putin proved eager to indulge the nostalgia of the populace, guiding it backward through history toward a revived Soviet nationalism. The parallels between Putin’s regressive crusade and Trump’s “Make America Great Again” mantra are expanded upon in Bryan’s film, as is their shared contempt for Hillary Clinton. The signs reading “Trump That Bitch” that peppered suburban lawns in northern Illinois were a direct result of the misogyny empowered and displayed by Trump during the 2016 election.

Putin’s grudge against Clinton stems from her alleged incitement of demonstrators in Ukraine, who protested against their Russian-backed and Paul Manafort-coached president, Viktor F. Yanukovich, after he pulled out of the European Union. Student demonstrators were murdered in the streets by police during clashes unforgettably chronicled in Evgeny Afineevsky’s Oscar-nominated documentary, “Winter on Fire: Ukraine’s Fight for Freedom.” Dismantling the EU is, of course, a key step in Putin’s plan to increase Russia’s power on the world stage, propelling his country to arguably play a role in Brexit and Trump’s withdrawal from the Iran nuclear deal. Putin’s desire for Ukraine to once again be one with Russia led government agents to poison McCain-supported presidential candidate Viktor Yushchenko, which left him badly disfigured though failed to prevent him from being elected thanks to a do-over vote demanded by Orange Revolution protestors. When Ukrainian Prime Minister and Orange Revolution co-leader Yulia Tymoshenko lost the 2010 presidential election—a year after a Russian company ceased pumping gas into Ukraine following disputes in the dead of winter—she was wrongfully imprisoned. The angry cries of her dissenters were unnervingly similar to the “Lock Her Up” chants aimed at Clinton, cleverly juxtaposed by Bryan.

Trump is portrayed as an ideal target for Russian coercion, with his big money, flip-flopping morals and financial situation made vulnerable when his doomed casino violated anti-money laundering regulations. The removal of pro-Ukrainian, anti-Russian language from Trump’s RNC speech causes McCain, with a humorless smile, to speculate, “Why would the Republican party remove a provision that would help a people who were invaded and slaughtered defend themselves? Interesting…” Lording over this dizzying web of corruption is Semion Mogilevich, a Russian crime boss as cartoonish a villain as Trump himself, whose claim that he’s merely a businessman “responding to the will of the people” is not a far cry from that of Al Capone, as portrayed by Robert De Niro in “The Untouchables.” The direct server link between Trump Tower and Russia’s Alfa Bank, coupled with Deutsch Bank’s support of Trump—not to mention the Russian ties of numerous Trump advocates, including Michael Cohen and Rudy Giuliani—further strengthen the case that our president has been caught red-handed.

Conspicuously missing from the talking heads assembled by Bryan is Senator Bernie Sanders, whose own presidential campaign fell prey to Russian bots aiming to divide the electorate through trumped-up allegations. Clinton is on hand to recount how Putin’s father pulled his wife out of the rubble during the Siege of Leningrad before nursing her back to health, a potent metaphor for what Putin intends to do with his country. The KGB’s bombing of apartments that caused shell-shocked Russian citizens to back him as he ascended to the presidency may have been ordered by Putin himself, a strategic maneuver McCain likens to “the rise of Hitler.” When Putin arrived in office, anyone who spoke out against his agenda was incarcerated or assassinated. One of his most revered critics, journalist Anna Politkovskaya, was murdered on his birthday. The only way Putin and Trump can succeed is by silencing the truth, since they are well-aware it is pitted against them.

I’d more than welcome a rebuttal film from the other side of the aisle, provided it contains the same level of in-depth research—and no, Dinesh D’Souza’s latest flimsily assembled pack of lies doesn’t count. Bryan’s film has set a formidably high bar for anyone seeking to refute the notion of Russian collusion in the election of Trump. How ironic that Ronald Reagan’s iconic line, “Tear down this wall!” has come hurtling back at his own party like a boomerang, since Republicans have chosen a president for whom the erecting of walls is his chief goal. The barrier along the U.S.-Mexico border he seeks to create is no different from that of the Berlin Wall Putin hopes to rebuild. “We weaken our greatness when we confuse our patriotism with tribal rivalries that have sown resentment and hatred and violence in all corners of the globe,” wrote McCain in his farewell message. “We weaken it when we hide behind walls, rather than tear them down.” 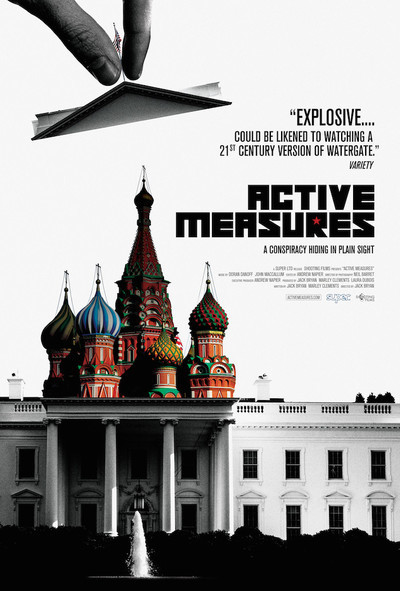