The case of Susan Smith is a tragic one. In the ‘70s, as a teenager, Smith hooked up with a Kentucky drug dealer named Kenneth Smith and found herself deeply embedded in the local drug scene, one that was growing with prescription drugs and other illegal substances. In 1987, a young hotshot FBI agent named Mark Putnam moved to the area to try and track down a local bank robber, and he crossed paths with Smith, turning her into an informant that allowed him to break multiple cases in the area. For extra income and a sense of self-importance, Smith was excited to help Putnam, and the two formed a relationship that turned sexual. When Putnam tried to end things after he no longer really needed her, Smith threatened to expose him, and the FBI agent killed his informant girlfriend. He was arrested in 1990 and the case is credited as the first time an FBI agent was convicted of murder. There’s more than enough meat on the bones of this true story for a film like “Above Suspicion,” but director Phillip Noyce can’t figure out how to tell it in a way that's more interesting than a Wikipedia entry.

In this tragically dull recounting of events, Emilia Clarke (“Game of Thrones”) plays Smith and a fellow HBO drama alum in Jack Huston ("Boardwalk Empire") plays Putnam. Neither seems quite comfortable in their roles. Clarke does her best to hold it together but is woefully miscast and Noyce can’t get her to the right place regarding the darker issues of this story like addiction, spousal abuse, and shocking violence of the final act. The whole project has a sense of “hillbilly dress-up” not unlike a certain divisive Ron Howard film of last year. Bluntly, and like that film, I never bought that any of these people were real.

The characters of "Above Suspicion" are not quite hillbilly caricatures but they verge so closely to them that you can see overqualified actors like Clarke struggling against the superficial script and filmmaking choices. Smith’s story is one of violence and broken dreams, one in which she replaced one garbage male with another who she thought was at the other end of the social spectrum but turned out to be just as awful. “Above Suspicion” isn’t brutal enough, it isn’t dark enough, and the stakes don’t feel high enough. It does a disservice to Smith’s story.

As for Huston, he too seems under-directed, playing Putnam as a man who goes through the motions more than he does a monster or even an attention-grabber who so desperately wanted to have it all—the family, the girlfriend, the high-profile arrests, and all only on his own terms. It’s a non-performance from a typically interesting actor who seems bored at times by the entire production. The whole cast feels under-directed outside of Clarke with familiar faces like Sophie Lowe, Johnny Knoxville, and Chris Mulkey barely making an impact. As if to compensate for the flat storytelling, it’s often over-edited and over-shot, with extremely sweaty close-ups meant to increase tension but only calling attention to themselves.

Ultimately, “Above Suspicion” fails the test of a true story film in that reading about the actual case is more interesting than watching the movie about it. Shot ages ago and delayed multiple times, it’s the kind of project that people like Clarke and Huston can walk away from and pretend never really happened. (They probably already have.) It’s just a shame Susan Smith’s story will be a footnote in their careers. 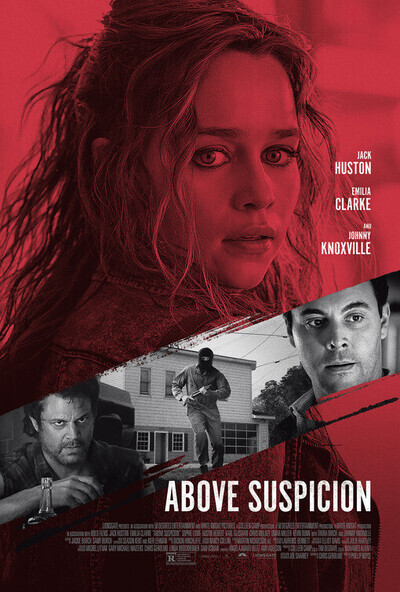 Rated R for sexual content and drug use throughout, language and some strong violence.