Despite some graceful images like a wave of flowers and a ride on a giant dandelion, “Abominable” lacks the personality to distinguish it from superior animated films that cover most of the same ground. A co-production with the Chinese company Pearl Studio, it’s very clearly been designed to appeal to the largest international audience possible, which means it’s been too obviously rounded out and sanded down. It sometimes feels Scrooge-like to come down on a sweet and simple film like this one, but kids can get bored too. And they will here.

Jill Culton’s film opens with a playful, adorable yeti breaking free from his confinement in a Chinese metropolis and finding his way to a nondescript rooftop. That’s where he encounters Yi (Chloe Bennet), a tough girl who has been working odd jobs to save the money to take a trip across the country that she was planning to take with her recently-deceased father. She realizes that the creature is not only harmless, but injured, and she heals its wound, giving it the name of Everest. Before you know it, Yi and two neighbors, the childish Peng (Albert Tsai) and the smooth-talker Jin (Tenzing Norgay Trainor), are traveling across the country to get Everest back to, well, Everest, and reunite him with his family. Trailing them are a doctor voiced by Sarah Paulson and a villainous rare animal collector voiced by Eddie Izzard.

A lot of animated fare hits familiar beats, but “Abominable” does so half-heartedly. It feels produced by a machine that was fed the scripts for the “How to Train Your Dragon” and "Kung Fu Panda" movies and “Smallfoot” and asked to produce a hybrid that could be as inoffensive as possible. And the script is stunningly flat in terms of entertainment value. While there’s something to be said for going the opposite direction of a genre that’s usually overloaded with jokes, I just wanted to laugh or smile at one line of dialogue, and I never did. Of course, there are great animated films that aren’t designed as comedies—and one can envision a version of this more heavily inspired by Miyazaki, for example—but this script doesn’t replace the lost humor with magic. The characters all speak of what they need to do or what matters to them and then move forward to the next set piece to do it. It’s disappointingly boring.

"Abominable" actually works best when it discards language altogether and focuses on nature-driven visuals or music. There are a few sequences in which Everest reveals he has magical powers that can impact nature—scenes in which giant blueberries chase our heroes down a hill or a yellow wave of flowers propels them forward—and it’s here where “Abominable” comes to life. There’s also a captivating sequence at the Leshan Giant Buddha statue in Sichuan (even if it was a mistake to go to something as obvious as Coldplay on the soundtrack in that scene). “Abominable” is really a road movie across a country that has not really been captured in animated films for American audiences, and there’s intrinsic value in that. A lot of the landscapes work. It’s when it crashes back to the dull narrative and characters, that the magic of the journey disappears again.

Ultimately, “Abominable” wants to be a cinematic representation of its central character—lovable, sweet, and occasionally magical. But it actually feels more like the meanie corporate boss—more concerned with profit than creativity, trying to own a piece of the animated world that it doesn’t really understand.

This review was originally published from the Toronto International Film Festival on September 8th, 2019. 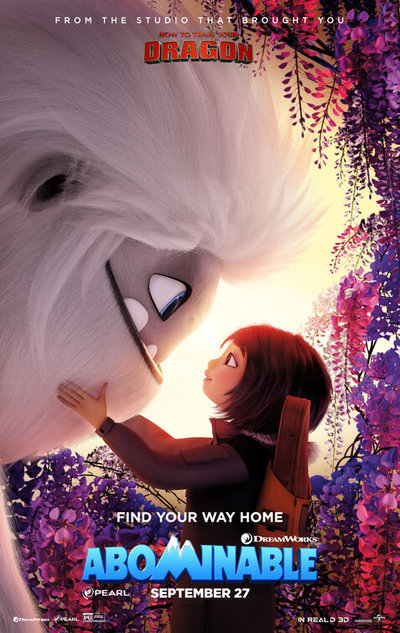