Spencer Squire’s “Abandoned” isn’t explicitly a pandemic movie, but it feels like a pandemic production with its incredibly limited cast and single setting production. It has the sense of a project put together by a small group of people who understandably wanted to keep working in safe conditions as the world became so dangerous. Given my general enjoyment of confined setting two-handers, I was ready to get sucked into the world of “Abandoned,” to feel as trapped as its obviously doomed heroine. Sadly, Squire’s debut becomes increasingly ineffective, falling victim to shoddy filmmaking and lackluster storytelling. It’s one of those projects where the set-up and finale were clearly well-considered, but the connective material, the bulk of the film, was not. Instead of ratcheting up tension, Squire seems content to sustain a minor-stakes atmosphere that, well, abandons his leading lady in a film that doesn’t do anything interesting with her predicament.

Said leading lady is Sara (Emma Roberts), a troubled soul with an infant son who moves into a remote farmhouse with her husband Alex (John Gallagher Jr.). Sara is clearly struggling with post-partum depression—the whole film is an allegory for that condition, but too often feels like it’s not empathetic enough to really understand it—and yet “Abandoned” never questions if it’s a good idea to leave a depressed mom in the middle of nowhere while her husband is gone for hours on remote farm work. It’s a shallow set-up for a shallow movie, one that’s all the more transparently manipulative in its sound design, which is dominated by roughly 55 minutes of “crying baby” sounds.

Of course, “Abandoned” isn’t a drama about a troubled mother—it’s a horror movie about a house with a dark past. For reasons that don’t make much sense beyond “movie,” Sara and Alex don’t even explore the house before buying it. And so the locked door and the oddly-placed wardrobe that’s clearly hiding something come up only after they’ve signed the contract. At least the realtor tells them about the murder-suicide that happened in the home as she urgently tries to get Alex to sign before he changes his mind. Before you know it, Sara is hearing sounds behind the walls and getting visits from a creepy neighbor (Michael Shannon), who knows a thing or two about the house.

Shannon, clearly doing a favor for a friend who co-starred with him in “Heart of Champions,” only appears in a few scenes, and it’s no exaggeration to say he seems like he’s visiting from a better movie. Shannon finds a haunted register in this man’s cadence and body language that gives “Abandoned” the only weight it has, but he’s not in it nearly enough to salvage the manipulations of Erik Patterson and Jessica Scott’s dull screenplay. There’s just no meat on this film’s bones. Gallagher gets a non-character and Roberts is left hanging by being forced to play post-partum as a horror trope. Just because it was made during the pandemic doesn’t mean viewers should feel sick when they’re done watching it.

Now playing in theaters and available on digital and on demand on June 24th. 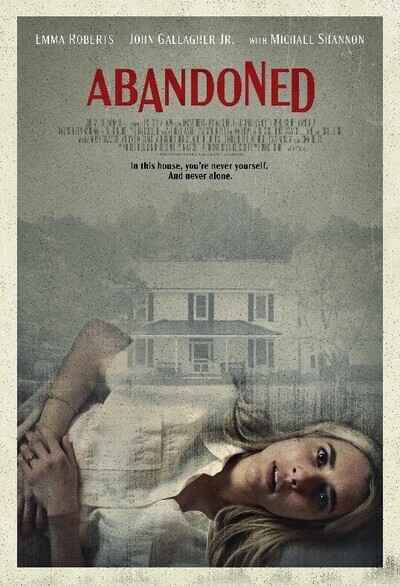