A Year in Champagne

“The night they invented champagne/they absolutely knew/that all we'd want to do/is fly to the sky on champagne.” So goes the song from “Gigi.” A pleasant thought, and I imagine some vintners wish that it had taken only one night to invent champagne. One can only imagine the nights, days, and years of trial and error that went into concocting the very precise and highly legally regulated process behind the creation of the only sparkling wine that can rightly be designated champagne. Because just as only whiskey made in Scotland can be called “Scotch whiskey” only sparkling wines made in the Champagne region of France—a relatively narrow strip of a not-exactly-enormous country-—be called Champagne. The reasons why, and many other seeming mysteries of process and designation, including the secret of how those bubbles come to animate a beverage that is not, in fact, carbonated, are provided in this brisk, entertaining film, directed by David Kennard, who last year addressed red-wine concerns with the documentary “A Year In Burgundy.”

Spectacularly photographed throughout by Jamie LeJeune, the movie opens with a birds-eye view of a field of grapes. This is courtesy of a hot-air balloon ride taken to celebrate the 40th birthday of Xavier Gonet, one half of the champagne-making concern Gonet-Medeville. Gonet seems a genial enough fellow, even as he describes the effect his balloon-ride provided him: “We were like gods...looking down on our subjects. It was fun.” Okay, fella.

While the style of the movie’s prose narration is a little pedestrian, it’s packed with information: for example, under the topsoil of the fields where champagne grapes are grown, the ground is largely chalk—weird, right?—and this somehow accounts for the “clean crisp finish” of the beverage. Despite the finitude of the product, the film notes that “Champagne is an industry with a massive global market to defend,” in part at least because of its mythic stature among celebratory intoxicants. Alternating with detailed descriptions of the arcane practices involved with its manufacture (it takes a really dedicated winemaker to look after the bottle-revolving process that rids the liquid of its sediment) and chronicles of the tragic, war-wracked regions that gave birth to the quaff, the movie has some compelling content to share. And the views of the French countryside it offers, not to mention of pleasant villages whose populaces seem refreshingly tied to the land rather than to their digital devices, constitute a kind of cinematic vacation for the viewer interested in such a thing.

But Kennard is also pretty devoted to his commonplaces, and the way he dots the movie’s soundtrack with snippets of Beethoven’s Seventh Symphony and Strauss’s “Blue Danube” waltz is a bit predictable. It’s also telling that while he enjoys laying out the arcane rules of Champagne-making in great detail (100 pounds of grapes must produce only eight ounces of juice, holey moley that’s a lot of grapes), when it comes to labor relations between the very nice and well-off families who run the vineyards and the folks who actually pick the grapes, the movie shows somewhat less engagement. I’m not saying there’s a scandal being ignored here, just that it might be nice in the film to hear from someone who doesn’t get to look down on the grapevines like a god. We’re supposed to coo at the adorability of the grandchildren of the sports-car driving fat cats who do some light picking of a weekend to get a feel for the activity, but we never find out the perspective of the picker who really has to put his or her back into the work. One hopes that they get a free bottle or two as a bonus.

Still: the mental stress of this work is clearly not nothing. There’s so much that can go wrong, that even the most self-satisfied of the vintner has control over, that one can’t help but admire the skill and persistence of Champagne makers. After all, bathtub gin can get one just as drunk, if not drunker. The Champagne experience is a particular one, and even if you don’t imbibe this movie can give you an appreciation for what makes it special. 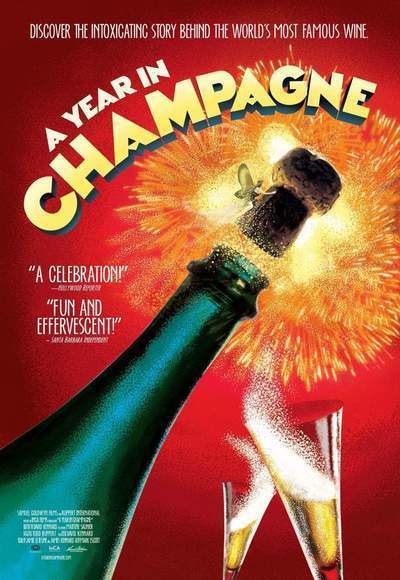