Social media platforms that should enhance freedom of expression are being used to silence journalists around the world, especially in Rodrigo Duterte’s Philippines, which is the canary in the international coalmine for how violent, hateful regimes are using modern technology to destroy their opponents. Ramona Diaz’s “A Thousand Cuts” never explicitly draws the line from the Duterte techniques of media manipulation to how Donald Trump has delegitimatized his critics with cries of “Fake News” but it also doesn’t fail to make the point that this is a crisis that cannot merely be relegated to something that happens “somewhere else.” It is happening in societies around the world as powerful, amoral people use their control over social media networks to destroy lives and institutions. “A Thousand Cuts” isn’t so much a warning about what could happen in the United States and other countries; it sounds an alarm about what is happening everywhere.

Diaz displays a remarkable skill with editing hours of footage about a complex issue into a tight piece of non-fiction filmmaking that makes its point often merely by bearing witness to history being made in the Philippines. She charts the rise of Rodrigo Duterte’s campaign of violent intimidation, making it clear how he achieved power by promising vengeance, turning the streets of Manila into a bloody nightmare by empowering his people to murder anyone involved in the drug trade. Like so many dictators, he rose to power on a platform of fear—only he could protect the innocent citizens of his country from the criminals overtaking it. At the beginning, people like Maria Ressa and her organization Rappler were there to speak truth to power, posting investigative reports about the impact of Duterte’s regime and even interviewing the world leader.

From the beginning of “A Thousand Cuts,” Diaz and her team present a firm grasp on all of the issues at play in this complex situation, never dumbing it down for easy consumption but also never letting it get away from them. The filmmaking team was allowed remarkable access to elements of the Duterte administration, including underlings who helped drive his social media campaigns, the blindingly loyal ones designed to elevate him and the threatening, vile ones that targeted his enemies. And we also spend time with future politicians enabled by Duterte’s rhetoric, including a police chief who tries to use the drug war to further his career and a social media darling who tries to turn Insta-fame into actual political power. Diaz never bangs this drum too loudly, but there’s a disturbing reminder that politicians like Duterte don’t exist in a vacuum—they enable not only their underlings who have similar beliefs but empower anyone to use questionable tactics to get ahead.

Through it all, “A Thousand Cuts” keeps returning to Ressa, who remarkably holds out hope through all of it, even as Duterte has her arrested and charged. There’s so much tension in Duterte’s assault on journalism, including death threats via social media, that “A Thousand Cuts” plays out like a thriller in terms of what might happen to Ressa next. Her life is literally in jeopardy, and I kept worrying that the inevitable extreme of dynamics in which the press is turned into the enemy would lead to a tragedy. Diaz captures brief glimpses of concern and doubt on Ressa’s face, but it’s not an exaggeration to say she’s an inspiration. She keeps fighting against an increasingly rising tide, and that fight is far from over—the film, which premiered at Sundance, contains a coda from a recent Ressa ruling in June 2020. There’s an immediate tension here that’s reminiscent of “Citizenfour” in terms of what’s at stake.

There have been many films, especially recently, about the war on journalism and free speech around the world, but “A Thousand Cuts” stands apart from the crowd through Diaz’s laser focus and deep understanding of the issues at play in the Philippines, while also finding a way to keep them relatable to the rest of the world. It is a balancing act of a documentary that explains what’s happening in the Philippines, how it could happen anywhere, while countering what could have been a brutal nightmare without a vision of resilient hope in Maria Ressa. One of the most striking moments in “A Thousand Cuts” comes when Ressa turns the classic Holocaust poem by Martin Niemöller into something we all need to consider. The classic poem about not speaking out when “they” come for those who aren’t exactly you and then having no one to speak for your aid gets a twist: “First they came for the journalists. We don’t know what happened after that.” 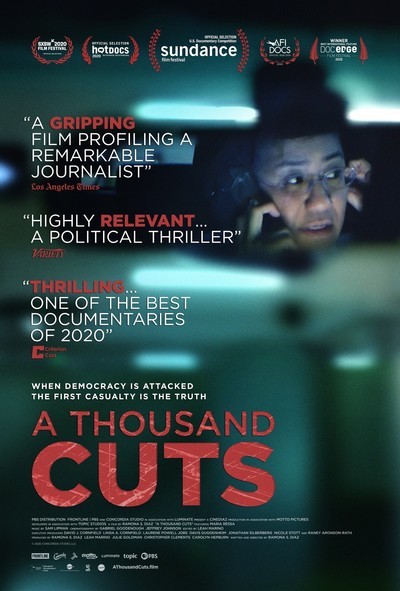 Maria Ressa as Herself