They say that war is hell. War relief doesn’t look like any kind of picnic either, and since even before Ernest Hemingway drove a WWI ambulance, stories of the mopping up during or after an armed conflict capture the imagination in a different way than tales of out-and-out combat do. “A Perfect Day,” directed by Fernando de León de Aronoa, making his (mostly) English-language feature debut, is set “Somewhere In The Balkans” and follows a small group of NGO-affiliated aid workers in the aftermath of the Bosnian war.

The first unappetizing task we see Benicio Del Toro’s Mambrú and his translator Damir (Fedja Stukan) working at is trying to pull a dead body out of the well of a village. The rotting body has been dropped in on purpose by hostile parties, hoping to contaminate the local water supply. The rope holding the corpse snaps, leading Mambrú to give the deceased a profane and embittered nickname. In the meantime, his colleagues at Aid Across Borders (a fictional name for what seems an amalgam of a number of real organizations), a gonzo fellow who goes by the name “B” (Tim Robbins) and idealistic newbie Sophie (Mélanie Thierry) are confronted, while driving, by a dead cow in the middle of the road. B recognizes this as a trap: their vehicle is intended to swerve right into a land mine. But are the folks who laid the mine hoping for them to swerve left, or right? B can’t quite reverse-engineer their logic, and eventually concocts a novel (or perhaps not so novel) solution with respect to the bovine Gordian Knot.

These grisly absurdities are part of the day-to-day realities for this crew, although, in keeping with its title, what the viewer gets are the hour-to-hour realities. Other dilemmas concern the arrival on the ground of an assessment executive named Katya (Olga Kurylenko) with whom Mambrú has had some prior romantic involvement. Mambrú’s not just irritated by her presence but by the effect he worries her presence might have on his back-home girlfriend—gossip travels fast in these circles. And then there’s the winsome pre-teen Nikola (Eldar Residovic) who’s had his soccer ball stolen by some slightly older playmates, one of whom is determined to protect his loot with another piece of presumed loot … his gun. Mambrú would like to do the kid a solid, so takes him under his wing on their travels.

While the medics in Robert Altman’s “M*A*S*H” could be a crass, mean bunch, that film also set the template for the portrayal of relief workers in post-WWII cinema. They’re gold-hearted gonzos and adrenaline junkies who maybe even get off on not changing clothes for three days or more. “Is this your first corpse?” B asks Sophie early on. Lapsing into rhapsodic mode, he continues, “I remember the first time I got laid, but my first corpse…” The characters in “A Perfect Day” don’t get to indulge in much eccentricity because they’re too busy banging their wills against bureaucratic idiocy. Sophie’s sanitation expert insists that the well must be cleared even after the projects been tabled by coordinators. Mambrú does some logistical legerdemain that will (theoretically) enable the crew to complete the task, but Murphy’s Law continues to intervene, helped along by both natives and U.N. peacekeepers. A sinister scene in which some Bosnians close a road while some presumably doomed prisoners stand with their hands up is among several vivid sequences. “According to the peace agreement these guys should have been demobbed by now,” Katya fumes. “You wanna go tell ‘em?” Mambru replies. She does, but it doesn’t do a lot of good.

Working with cinematographer Alex Catalán, director de Aranoa gets off some very authentic-looking tableaus; the makeshift conference room in a leaky building, with grim plastic chairs and a small puddle on the concrete floor, is especially evocative. This aspect, and the alert-but-lived-in work by the excellent cast, make “A Perfect Day” register a little more sharply than some of its more commonplace (but apt) ironies might have in the hands of a lesser filmmaker. 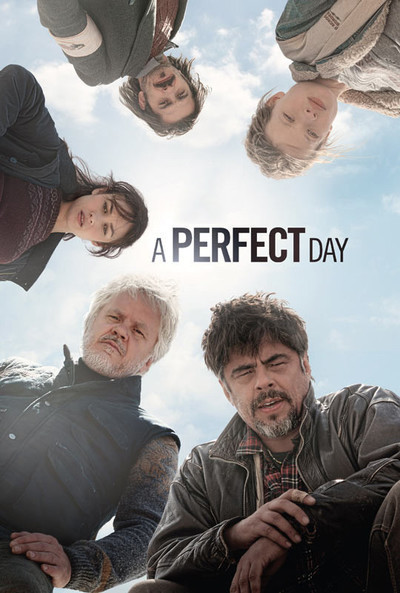 Tim Robbins as B