There are a few pleasures in “A Nice Girl Like You,” the most striking being the relationship between Lucy and her friends. Distraught over the break-up, Lucy retreats to work as a violinist and the counsel of her friends and quartet-mates, Priscilla (Mindy Cohn), Nessa (Jackie Cruz) and Paul (Adhir Kalyan), all of whom somehow contribute to her porn education. Yet, in other moments when they need her, she’s there for them, too, making it feel as if they don’t only exist to support her. Then there’s Grant (Leonidas Gulaptis), a terribly charming guest at a wedding Lucy works who eagerly chats her up and doesn’t have the same shame-filled views around sex that she does. His presence may distract a bit from Lucy’s self-fulfillment, but he adds a fantasy element to the story and a sort of goal for Lucy to work towards.

If “A Nice Girl Like You” would have stayed the course of the book it’s based on, Ayn Carrillo-Gailey’s 2007 memoir Pornology, it might have been an interesting enough premise. Instead, Andrea Marcellus’ screen adaptation whitewashes the main character and moves the narrative into a more conventional territory, one centered on love over lust, tame over the risque. Certain conversations around sex feel rather dated or muted in 2020, and more often than not, a lot of the movie’s humor hinges on finding sex inherently embarrassing. Lucy never reflects on why or how she might have picked up these negative attitudes towards sex, and the movie never fully sheds her othering perspective on porn performers, strippers or sex workers. The way Lucy looks at them or talks about them keeps them at arm’s length.

Other jokes are so contrived, they’re not funny but cringe-worthy in the tradition of the Farrelly brothers, like when Lucy’s embarrassed by a sex toy at work or when she unwittingly puts an erection cream on her lips, swelling them up as if she’d been stung by bees. There are other bumps in “A Nice Girl Like You,” including its choppy start when the narrative bounces back and forth in Lucy’s story and briefly uses a voiceover to hear Lucy’s inner dialogue. Thankfully, both affectations do not last past much longer than the first 15 minutes. The Riedells and cinematographer Nico Van den Berg also stumble by overlighting the movie and keeping its shots static, adding to the movie’s blandness.

And while I have “A Nice Girl Like You” to thank for the line, “I thought you were evolved. We met at a film festival, for God’s sake!”, it leaves much to be desired. There’s a sharp movie to be made about getting over an aversion to sex, but this one plays it relatively safe. It sticks to very conventional marks—after all, the liberation of Lucy only leads her back to the safe confines of a monogamous straight relationship and not much reflection of what she’s actually learned or embraced from her porn quest. Since there are different strokes for different folks, I hope this sex rom-com can be someone else’s cup of tea even though it wasn’t for me. 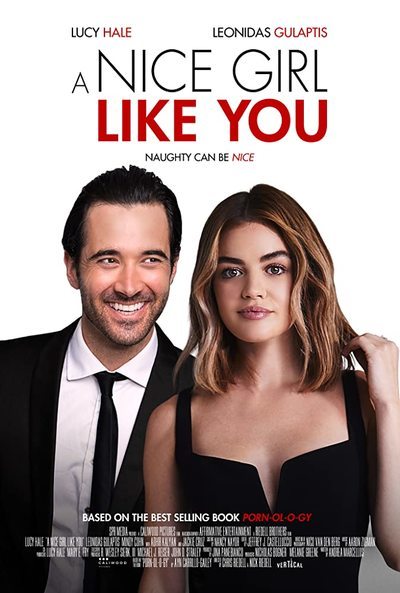